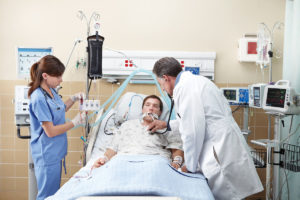 Intensive Care Unit (ICU) — Special Employees and Conditions
The study of anesthesiology has greatly expanded to encompass in its spectrum the care of the most critical patients in the hospital. This article addresses the basic tenets of intensive care unit (ICU); its organization, composition, components, modern technical armamentarium and concludes with a prologue to brain death and its determination.
read more
Load more
Share
Ask Questions
Take Notes
Download Slides
Report Mistake
Comments
show all Show less
My Notes
show all Show less
Learning Material 2
show all Show less
Report mistake
Transcript
0 of 0

00:00 So we're now going to step away from SIRS and sepsis, and we're going to talk about General Management of the patient in the ICU, including sedation, pain control, and muscle relaxation. Muscle relaxants should be used with great care in the ICU. It is very easy to produce immobility in the presence of awareness and pain. If they are used at all, a peripheral nerve stimulator must be utilized to assess the degree of paralysis. The major reason for using paralysis is to minimize the body's oxygen demands. When the muscles are all paralyzed, the oxygen demands in the body drop dramatically. So it's worth doing in some cases, but you have to be careful with it. And you have to remember that muscle relaxants produce no amnesia, and they produce no analgesia. Pain management is usually done by the Continuous Opioid Infusion, but this has to be carefully done, particularly in the presence of renal failure, because complications can occur because the metabolites of the opioids are not removed by the kidney. 01:14 Sedation drugs range from Benzodiazepines such as Midazolam, Lorazepam, the old Valium; anesthetic drugs such as Propofol, sometimes Ketamine; and central alpha2 agonists, drugs such as clonidine, which has been around for a long long time, and dexmetedomidine, which is a very, currently very aggressively marketed drug, which seems to be an excellent drug in some situations for sedation. Patients in the ICU require sedation pauses on a regular basis. And the reason for the sedation pauses is to give them a chance to wake up. Give them a chance for the nurses and doctors to assess their ability to recover and to see what level they're at with recovery. No sedation mode has been shown to be superior than others but some, as I mentioned dexmetedomidine, are very aggressively marketed. So sedation in the ICU is titrated to the Richmond Agitation Sedation Scale or RASS, Richmond Agitation Sedation Scale, throughout the time that they are in the ICU. So I'm going to let you look at the slide and go through the various numbers. I'm not going to read it to you, it's easy to see how the scale is calculated. And, by reading through this and understanding it, you'll have a better idea of how sedation is managed and what level of sedation is considered to be a normal level. Patients often spend extended periods of time in the ICU. And they can't eat. 02:56 They're usually unconscious, or paralyzed, or heavily sedated, so nutrition becomes a major issue. And it's a very complex topic and we can't cover it in detail in these talks. But the bottom line is that the nutrition is given enteraly, through the gut if possible. And this can be either by an oral gastric tube that goes through the mouth down into the stomach or even out, preferably out into the duodenum or a nasogastric tube. And fats, carbohydrates and protein can be delivered this way. And the normal digestive factors of the human being are utilized to absorb and use these agents. This is far and away the best way to feed patients in the ICU. Early enteral nutrition improves outcome in critically ill patients. And we've only known that for a few years. So it's part of the normal treatment in the ICU now. Treatment, nutritional treatment can be given intravenously by a central line directly into the circular system, circulation system, but this is a complex process and is often complicated by infection and inadequate calorie delivery. It is not the first choice. This is a very controversial topic. We basically don't do a great job of nutrition support for patients in critically ill situations.

The lecture Sedation in the ICU – Special Devices (ICU and Brain Death Determination) by Brian Warriner, MD is from the course The ICU.