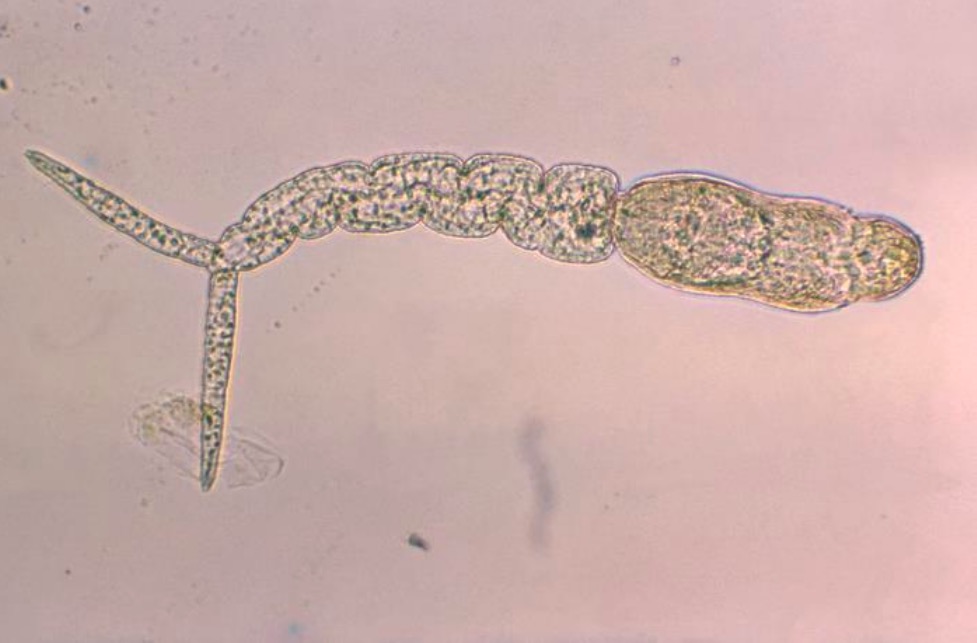 00:00 The schistosomes of course are examples of the non-segmented flukes. And there are four different schistosomes which cause significant human disease. Again, these are rather small worms and we'll talk about these in a separate lecture. They are schistosoma mansoni, and that's the worm form of course. Schistosoma haematobium. This is the egg form. It's obviously not a worm but it's in egg form that's stable in the environment. Schistosoma japonicum, in the egg form in submucosal tissues. 00:34 And Schistosoma mekongi, another egg form. So we had one photograph of the actual worm and three different egg forms for these schistosomes. I want to talk a little bit about how these parasitic infections are transmitted. So first we're going to focus on those that are transmitted from parasites being in the feces. So lets zoom in on this. So in the first case, the mode of exit for both of these categories is feces. So, the parasite is shed in the feces. For some this is reintroduced into humans by eating. So this is called fecal-oral contamination. It can happen if food or water becomes contaminated with fecal material. So cryptosporidiosis is an example of a parasite infection that goes from human to human by fecal-oral contamination. It can also go from animal to human. And there are other examples of this kind of transmission here. Amebiasis, Giardiasis, Strongyloidiasis, Ascariasis, Trichuris infection and the pork tapeworm. Those are all transmitted human to human by fecal-oral contamination. Then there are other examples of fecal-oral passage involving animal to human. 01:52 Toxoplasmosis for example, from cat feces to human. Visceral larva migrans, from dog feces to humans. 01:59 If you ever walk around on a deserted beach that's not well cleaned and there are wild dogs walking around, you better make sure you wear shoes. Because the dog tapeworms are in the dog feces and they can get into your feet and cause visceral larva migrans. Now there are also examples of parasites that are shed in the feces but that enter your skin. An example is strongyloidiasis, coming from a dog or a cat hookworm or schistosomiasis. 02:33 Lets now look at other modes of transmission and we'll focus in on these. As I told you, many parasites are transmitted by the bite of an arthropod. And sometimes the parasite leaves the host by an arthropod bite and then it enters another host by the same kind of bite. From human to human examples include lymphatic filariasis, leishmaniasis, malaria or onchocerciasis. But the parasite bite can go animal to human as well. Trypanosomiasis (sleeping sickness or Chagas disease), leishmaniasis, the disease can go from an animal to a human. And finally there are some parasitic infections that are acquired by eating inadequately cooked meat. So there is no mode of exit here. The parasites are within the animal typically in the muscle tissue. And when you eat them undercooked you get infection. 03:31 Examples of these are trichinosis, toxoplasmosis, the beef, pork and fish tapeworms. So the bottom line here folks is that you really need to cook your food well. Otherwise, you could be risking a parasite infection. Finally there's a whole new mode of transmission of parasites we haven't talked about. 03:52 This is by blood transfusion. The malarias, trypanosomes, toxoplasma, leishmania, babesia. 03:59 These are all potentially transmitted in the blood. So, those countries that check for these parasites you're certainly better off than in countries where these are not checked for because there have been ample numbers of transmissions documented where these go from one person to another via donated blood.

The lecture Schistosomes – Parasites by Vincent Racaniello, PhD is from the course Microbiology: Introduction.

Which of the following parasites is NOT transmitted between humans via the fecal-oral route?

Which of the following is NOT transmitted from human to human via an arthropod's bite?

How is trichinosis transmitted from animals to humans?