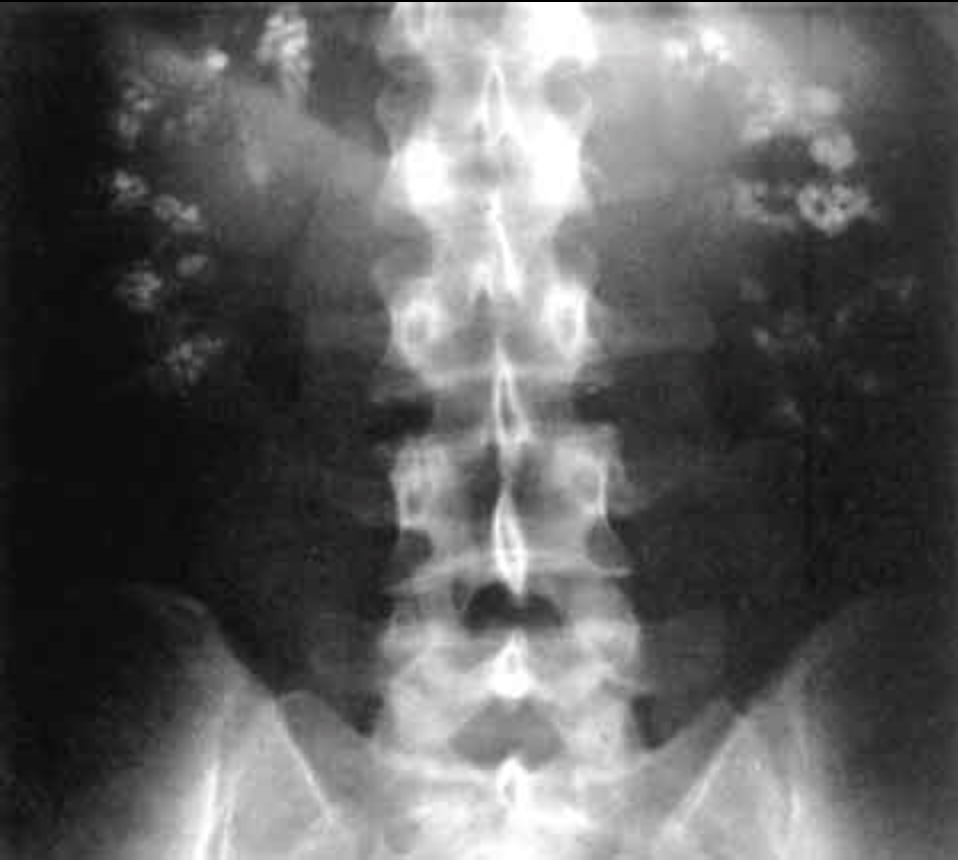 Renal Tubular Acidosis
Renal tubular acidosis (RTA) is an imbalance in physiologic pH caused by the kidneyâ€™s inability to acidify urine to maintain blood pH at physiologic levels. Renal tubular acidos3s exist in multiple types, including distal RTA (type 1), proximal RTA (type 2), and hyperkalemic RTA (type 4). Depending on the type of RTA, various mechanisms cause dysfunction of renal acidâ€“base handling, resulting in a nonâ€“anion-gap metabolic acidosis. All RTAs present clinically with some degree of metabolic acidosis; however, distal RTA and proximal RTA also have hypokalemia, while hyperkalemic RTA does not. Diagnosis is primarily through the history and laboratory analysis, including measurement of serum and urine anion gaps. Treatment involves the correction of chronic metabolic acidosis with alkali to prevent its long-term catabolic effects on bone and muscles, as well as addressing any underlying causes leading to the RTA.
read more

Kidneys
The kidneys are a pair of bean-shaped organs located retroperitoneally against the posterior wall of the abdomen on either side of the spine. As part of the urinary tract, the kidneys are responsible for blood filtration and excretion of water-soluble waste in the urine. The kidneys also play a major role in homeostatic processes, including electrolyte concentration, blood pressure, and acid–base regulation. Grossly, they consist of an outer cortex and inner medulla. Microscopic functional units known as nephrons filter the blood through a structure called the glomerulus, and this filtrate is then modified and concentrated as it moves through a complex tubular system. The renal arteries supply the kidneys via a central opening, known as the renal hilum, on its medial side; large renal veins empty directly into the vena cava.
read more
Load more
Share
Ask Questions
Take Notes
Download Slides
Report Mistake
Comments
show all Show less
My Notes
show all Show less
Learning Material 2
show all Show less
Report mistake
Transcript
0 of 0

00:02 In this lecture, we’re going to review renal tubular acidosis. 00:06 This is a difficult topic to address because it’s complicated. 00:10 But I’m going to try and make it as basic as we can, so we can understand the fundamental aspects of this disease. 00:18 So it’s clear that we worry about renal tubular acidosis in children when they have non-gap acidosis but do not have another cause such as diarrhea. 00:30 There are 4 types of renal tubular acidosis, types 1, 2, 3 and 4. 00:37 In general, you can think of these as starting as most distal in the loop on Henle and then going more proximal. 00:44 So type 1 is the farthest from the glomerulus and type 4 is the closest. 00:50 I’m going to through these types of RTA one at a time. 00:54 So let’s start with type 1 RTA. 00:58 Here is a renal tubule collecting duct cell. 01:03 Remember, this is in the distal part in the collecting duct of the kidney. 01:09 On the left side of the slide is where the blood is and on the right side of the slide is where the urine is, and the cell is the green box in the middle that has the alpha. 01:19 In fact, this is the alpha cell of the collecting duct. 01:23 Let’s look at what this cell is doing. 01:26 So in this alpha cell, basically what’s happening is nitrogen is travelling through the cell and into the urine in the form of NH3. 01:35 But that’s not all that’s happening, also that NH3 is then binding with a proton in the urine and that’s combining to form the ammonia ion, which is then being peed out. 01:50 To get that hydrogen out of the collecting duct, we have an ATP-powered proton pump. 01:57 So that ATP-powered proton pump is responsible for getting the hydrogen out, so that it can then bind with the NH3 which freely travel to the cell. 02:09 Additionally, another way to get the protons out is through a counter current exchange mechanism. 02:15 This protein which exchanges a proton for a potassium which is coming back into the cell. 02:23 Here is the beta cell, this is another cell in the collecting duct. 02:28 In this case, it is exchanging negative ions and in particular, it’s extruding a bicarbonate or HCO3 negative ion for a chloride negative ion. 02:42 Okay. 02:43 So the problem in RTA type 1 is that there is an inhibition of the activity of this ATP pump. 02:51 Essentially, protons are having a hard time getting out. 02:56 This will cause a relative acidosis. 02:59 Also, however, there is an up regulation of this particular thing, the exchange pump between the bicarbonate and the chloride. 03:10 Okay. 03:11 So what exactly is going on here? Well, there is a mutation in a gene in primary RTA type 1 or this can also happen in acquired causes. 03:22 Examples would be patients with cirrhosis or lupus or Sjogrens syndrome or sickle cell or lithium or amphotericin exposure. 03:32 So we can have primary or secondary causes of this fundamental problem in the cortical collecting duct. 03:40 Typically in patients with RTA type 1, they will have a lowish HCO3 level in their blood, around 15-20 would be expected. 03:51 Their urine pH should be high, they should have basic urine because they’re peeing out base retaining acid and becoming acidotic. 04:01 Typically because potassium reabsorption may be impaired, these children may have a low potassium. 04:09 Also, they may have hypercalciuria as calcium may go out for the ride and this can result in renal stones. 04:18 In patients with secondary RTA type 1, you will see signs to their secondary disease. 04:24 So for a patient with lupus for example, you might see the malar rash. 04:29 In general however, the way you know a patient has RTA type 1 is that their urine pH is usually high. 04:39 So the treatment is giving them bicitra. 04:42 We replace the bicarb that they were otherwise losing. 04:45 Remember, bicitra is simply 2 bicarbonates stuck together. 04:50 If these patients do have a loss of potassium, we may supplement that, but that’s not always needed as their potassium loss is usually not too severe.

The lecture Renal Tubular Acidosis (RTA) in Children: Type 1 by Brian Alverson, MD is from the course Pediatric Nephrology and Urology.

Where in the kidney is the primary defect of type 1 renal tubular acidosis?

Which of the following acid-base disorders is most commonly seen in patients with renal tubular acidosis?

Which of the following ions are exchanged by the beta-intercalated cells of the collecting ducts?

Which of the following is NOT a feature of RTA type I?

Excellent lecture. It's a topic that I did not encounter in my lectures. Thank you!

Excellent lecture. It's a topic that I did not encounter in my lectures. Thank you!