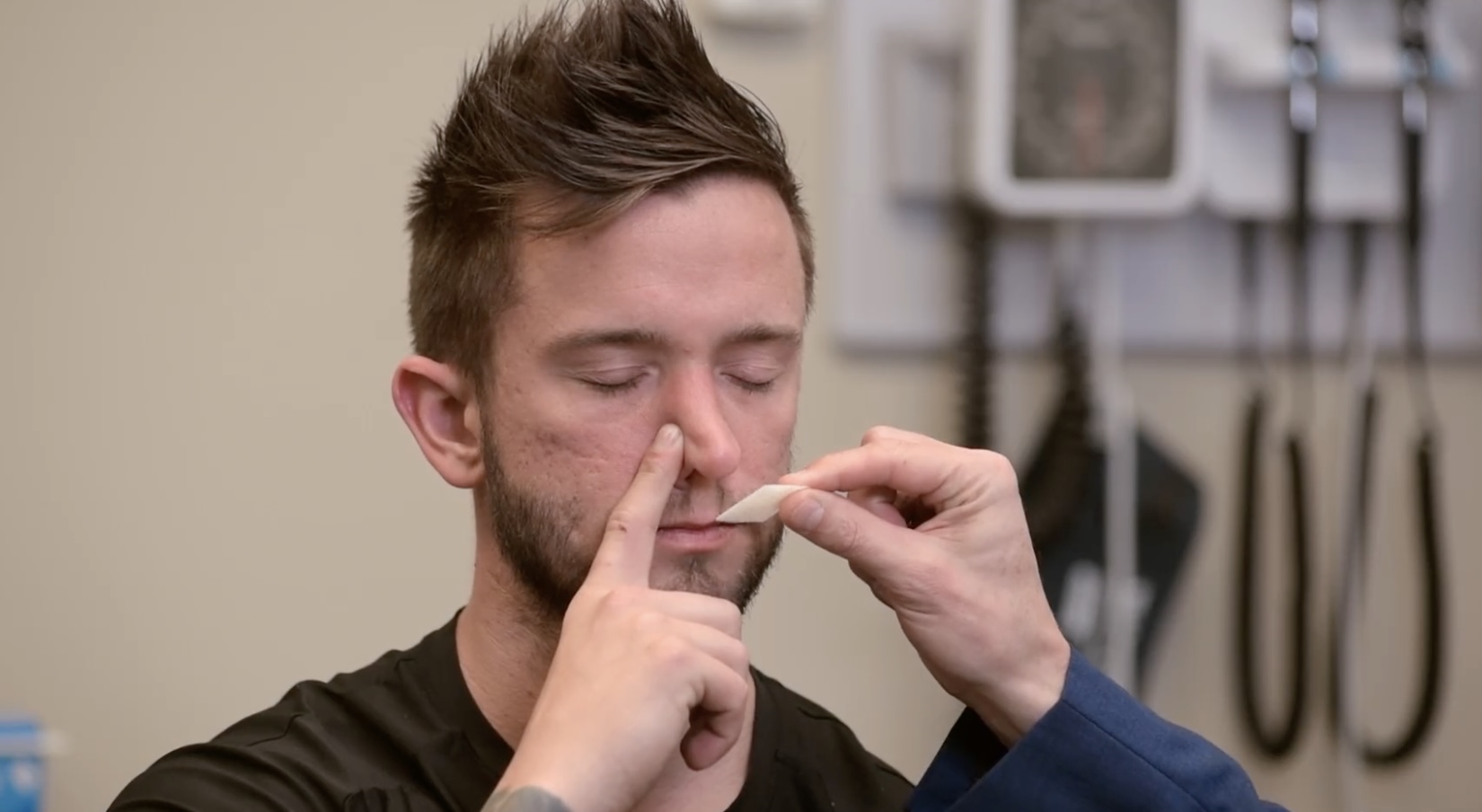 Neurological Examination
A neurological exam is a systematic assessment of cognitive, sensory, and motor responses to identify pathologies of the nervous system. A neurological exam allows for the localization of neurologic lesions to narrow the differential diagnosis and focus on subsequent laboratory and imaging examinations. The exam should include assessments of the subject's mental status, speech, cranial nerves, motor system, deep tendon reflexes, sensation, balance, and coordination.
read more 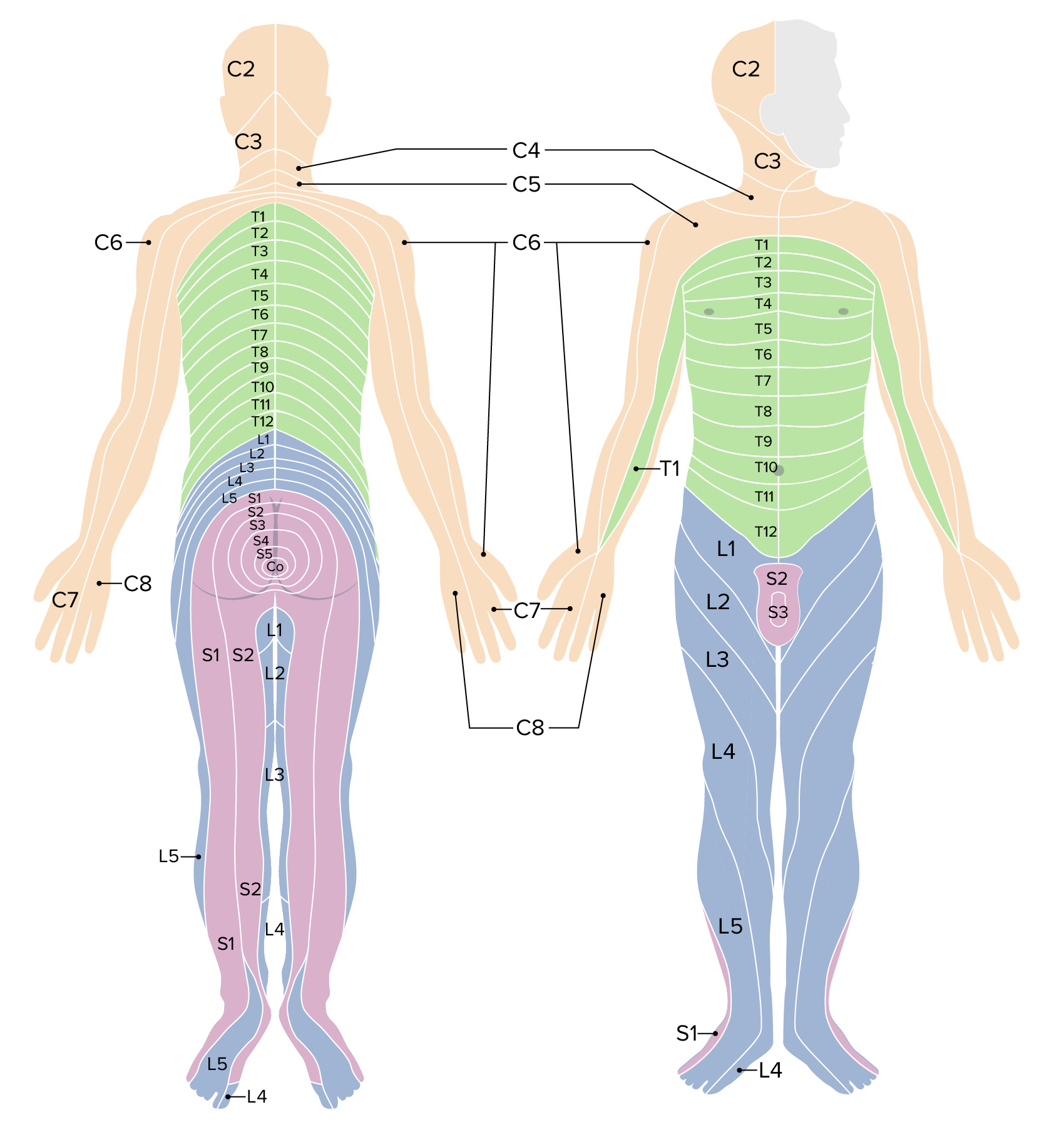 Spinal Cord
The spinal cord is the major conduction pathway connecting the brain to the body; it is part of the CNS. The spinal cord is divided into cervical, thoracic, lumbar, and sacral regions, though because the spinal cord is shorter than the vertebral column, these regions do not line up with their corresponding vertebral levels. In cross section, the spinal cord is divided into an H-shaped area of gray matter (consisting of synapsing neuronal cell bodies) and a surrounding area of white matter (consisting of ascending and descending tracts of myelinated axons). Like the brain, the spinal cord is surrounded by 3 layers of connective tissue, collectively known as the meninges; these layers are the dura mater, arachnoid mater, and pia mater. The spinal cord is supplied by 1 anterior and 2 posterior spinal arteries.
read more
Load more
Share
Ask Questions
Take Notes
Download Slides
Report Mistake
Comments
show all Show less
My Notes
show all Show less
Report mistake
Transcript
0 of 0

00:01 So next up, we're going to talk about the more detailed neural muscular part of the exam. 00:05 We've already discussed how different skeletal problems and muscle problems may cause pain to the low back or around the neck, but now we want to tease apart whether or not there's any involvement of the central nervous system or peripheral nervous system. 00:18 Is there any evidence that a nerve root is being encroached upon in any way, or even any evidence that the spinal cord itself is being pinched. 00:27 So when we're trying to evaluate a patient to decide whether or not their back pain and potentially some paresthesias they're experiencing are related to radiculopathy or myelopathy. 00:37 We have to always keep in mind that we're trying to distinguish between upper motor neuron problem and a lower motor neuron problem. 00:44 One of the amazing things, despite the complexity of the brain, the amazing thing about making a muscle fiber twitch is that only two neurons are involved. 00:51 There's the upper motor neuron whose nucleus is up here in the cerebral cortex, in the motor strip, that's sending an axon down on the left hemisphere down to his medulla oblongata where it's going to decussate and cross over and then continue down in the lateral corticospinal tracts down to the level that's appropriate for the muscle that we're talking about, and at that level, it's going to synapse unto the second neuron, the lower motor neuron in the anterior horn of the spinal cord, and then the axon from that neuron will actually head out initially through a nerve root, then to a peripheral nerve, and ultimately to land on Shaun's, one fiber in Shaun's bicep muscle. 01:34 So, with such a simple circuit, we can really just tease apart on physical exam whether the problem is an upper motor neuron, perhaps involving a stroke, perhaps involving a spinal cord injury or if it's a lower motor neuron problem, namely involving encroaching on the nerve root, radiculopathy or peripheral nerve. 01:52 So patients with upper motor neuron disease essentially are not sending inhibitory input down to the lower motor neuron so the lower motor neuron is firing inappropriately, and so the types of manifestations that you'll see in that context are spasticity in the limb, because essentially if the muscle is firing without any inhibitory input it's just going to continue to fire and so patient's end up getting contractures, initially it's just some spasticity, now a little bit of resistance when I'm trying to pull their arm apart he would be resisting me and then over time, you can develop contractures if it goes untreated and this can occur in a setting of cerebral palsy for example or any hemispheric stroke would cause the same findings. 02:36 The muscle bulk, while it will go down, of course, with an upper motor neuron problem, the reality is that since the muscle is continuously active, the muscle bulk maybe relatively preserved. 02:49 In contrast, with a lower motor neuron lesion, there is no input going to the muscle or whatsoever, so in that case, number one, the first thing that you may see is atrophy and in a setting of a peripheral neuropathy, you should see fairly focal atrophy just on that side, so for example if somebody has median neuropathy, i.e. carpal tunnel syndrome, you may over time see atrophy of the thenar eminence here, since that nerve, the median nerve innervates the flexor muscles of the thumb. 03:21 In contrast, if somebody has evidence of bitemporal wasting and you can really see their intercostal muscles, etcetera, that may be evidence of a systemic process such as a cancer or HIV or things of that nature that are leading to a diffused wasting of protein, ultimately wasting of muscle mass. 03:41 So focal finding would be supportive of a lower motor neuron lesion. 03:45 In addition, since those muscle fibers aren't getting any input, they start to fire spontaneously and those are called fasciculations. 03:52 Fasciculations you can see in any muscle group, you can see them on large muscles and small muscles, you can even see them in the tongue sometimes for folks who are having bulbar issues with a lower motor neuron problem, and so those are types of things that you'll be looking for. 04:07 In addition, patients, as I said, so that was looking in muscle bulk, with muscle tone you'll have spasticity with upper motor neuron lesion. 04:14 So those are some of the main features between a lower motor neuron and an upper motor neuron problem. 04:20 The next important steps that we'll look for which helped us to distinguish those things is going to be the reflexes and then looking at strength as well. 04:28 So I find it really useful to make sure that you at least know one muscle that's associated with each nerve root, so then you can very quickly orient yourself to whether you're testing the C5 nerve root or the L3 nerve root without having to know every detail of every muscle and how its innervated. 04:47 Acknowledging that each muscle is likely innervated or gets contributions from more than one nerve root, if you at least know one nerve root attached to that muscle, particularly the most prominent nerve root, that can really help you to start making the correct diagnosis.

The lecture Review of the Motor Neuron and Motor Neuron Injuries by Stephen Holt, MD, MS is from the course Examinations of the Neck and Back Region.

Where do upper motor neurons cross over to the contralateral side?

What is one cause of lower motor neuron exam findings?

What is a physical exam finding seen with lower motor neuron disease?