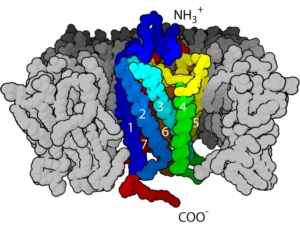 Second Messenger Systems
Signaling pathways are complex systems in which a single extracellular signal can elicit multiple intracellular events, some of which may also be triggered by other signaling pathways. We will discuss how this process occurs through kinase cascades and second messengers, and then apply these to processes to the regulation of protein expression and the fight or flight response, respectively.
read more
Load more
Share
Ask Questions
Take Notes
Download Slides
Report Mistake
Comments
show all Show less
My Notes
show all Show less
Learning Material 2
show all Show less
Report mistake
Transcript
0 of 0

Which of the following is true of second messenger systems?

Which of the following is NOT true regarding RTKs system?

Which of the following results from activation of the Insulin Receptor - Tyrosine Kinase (RTK) signaling pathway?

Which of the following statements best describes scaffold proteins?

Which of the following is an INCORRECT statement about the molecular switches?

complicated topic but I think I got it, though the Tyrosine kinase itself is a bit complex

complicated topic but I think I got it, though the Tyrosine kinase itself is a bit complex