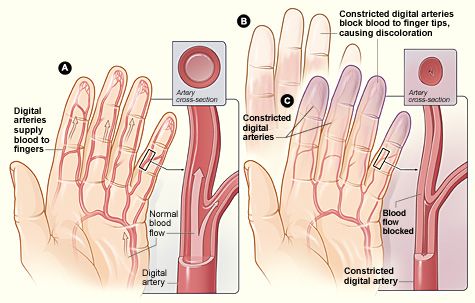 Raynaud's Phenomenon
Raynaud's phenomenon refers to an abnormally marked and sudden vasoconstrictive response to cold temperature or emotional stress. The condition was first described by a medical student, Maurice Raynaud, in 1862. These "vasospastic attacks" are usually but not always limited to the fingers or toes and are associated with sharply demarcated triphasic color changes at the distal portions of the digits. There is initial blanching with numbness, followed by cyanosis, both of which correspond to the phase of constricted blood flow; subsequently, there is a red blush of reperfusion after rewarming or resolution of the provocative stressful event. Raynaud's phenomenon may be primary (idiopathic) or secondary.
read more
Load more
Share
Ask Questions
Take Notes
Download Slides
Report Mistake
Comments
show all Show less
My Notes
show all Show less
Learning Material 2
show all Show less
Report mistake
Transcript
0 of 0

00:01 Let's talk about Raynaud's phenomenon because it's a related thing in which there is spasm in the artery. 00:09 So let's look at the definition and we'll start with the cases that we often do. 00:13 Here's an 18-year-old man. 00:15 And he complains of severe pain in the tips of his fingers and toes especially when dealing with cold materials. 00:23 And with emotional stress, you'll notice that that's similar to what is seen also in the Berger's patients. 00:29 He states that after working in the cold, he develops discoloration of his fingers progressing from white to blue. 00:38 And you can see that in the picture left and the right. 00:41 And then when he puts his hands in warm water or warms them up, then color is restored. 00:49 Usually, the fingertips are bright red for a while and then go back to normal color. 00:54 Now, Raynaud's phenomenon can occur by itself for no apparent reason associated with no disease and this is known as primary Raynaud's. 01:12 Fortunately, one can prevent this by staying in warm climate or keeping the hands or the toes quite warm with gloves or even some of these self-warming gloves. 01:25 And what happens when the Raynaud's phenomenon occurs that the fingertips become white let's say and you warm them up, suddenly blood flow is restored to the tip of the finger, it becomes bright red and it may feel a little tingly for a while and then gets better. 01:44 So that is the phenomenon by itself when there's no other illness occurring, we call that Raynaud's disease. 01:53 However, it's very common that Raynaud's disease occurs in this -- in a largest number of patients as I said before, and many as 3%. 02:04 However, Raynaud's phenomena can also occur secondary to other diseases. 02:09 For example; lupus erythematosus, rheumatoid arthritis or other collagen vascular diseases. 02:15 Again, same thing occurs, the tips of the fingers become white and painful. 02:19 If they warm up, they become red as the blood flow is restored and then returns to normal and the discomfort goes away. 02:29 So secondary Reynaud's occurs in, as I say, in the collagen vascular diseases. 02:34 It can also occur secondary to trauma. 02:37 Even myself had a finger once caught in the door and had for a number of years Raynaud's phenomenon in the tip of that finger. 02:44 It also happens under certain job conditions, for example; jackhammer operators on construction work. 02:51 But the commonest form is the primary Reynaud's where there's no underlying disease that we know about. 02:57 And again, one can prevent it by keeping the digits warm. Repeated Reynaud's can actually damage the skin and actually cause ulcers. 03:08 But fortunately, treatment of secondary Reynaud's often gets better also when we treat the underlying illness. 03:19 Let's talk about the pathogenesis. It's due to a vascular abnormality. 03:25 The endothelia, remember that little tiny layer on the inside of the blood vessel? It produces a number of substances that keep the vessels dilated. 03:33 And often in the setting of Raynaud's phenomena or disease, there's a deficiency of these vasodilating substances. 03:41 One of the most common is called nitric oxide. 03:45 When that happens that there's a deficiency, the blood vessel can spasm and close down and cause the white area that you saw from lack of blood flow. 03:54 And then when the hand warms there's a redness as the blood rushes back into the area of where the vasospasm had occurred. 04:02 There are often abnormalities in the autonomic nervous system as we talked about. 04:07 There's often repeated periods during stress where the noradrenaline or norepinephrine that's released at the nerve endings cause a spasm of the blood vessels. 04:17 And you can even have little clots forming because of the spasm. 04:22 And also, there's increased activation of the clotting system, the platelets can aggregate. 04:29 And with the production of increased platelet thromboxane in which is a vasoconstricting compound, you can also make this worse. So there's a whole cascade of things that can happen, starting with a vascular abnormality going on to a neural abnormality and then eventually adding in with some floating substances in the blood stream from the platelets that make things even worse.

The lecture Raynaud's Disease: Case, Definition & Pathogenesis by Joseph Alpert, MD is from the course Diseases of the Lymphatic System.

Which of the following is a more accurate description for Raynaud’s disease?

Which of the following factors is most likely to precipitate the symptoms of Raynaud’s phenomenon?