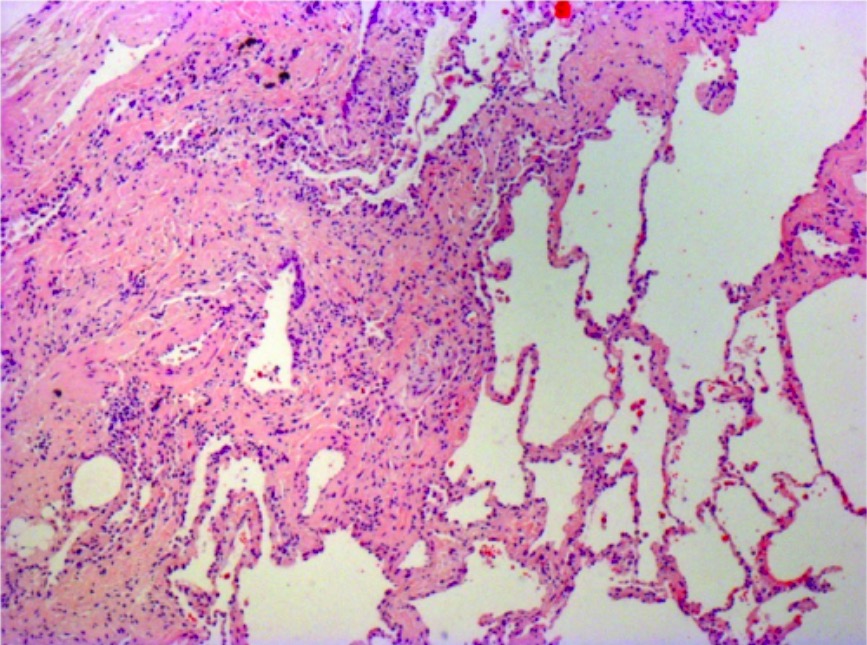 Pulmonary Fibrosis
Idiopathic pulmonary fibrosis is a specific entity of the major idiopathic interstitial pneumonia classification of interstitial lung diseases. As implied by the name, the exact causes are poorly understood. Patients often present in the moderate to advanced stage with progressive dyspnea and nonproductive cough. The diagnosis is made by characteristic imaging findings, pulmonary function testing that indicates restrictive lung disease, and (if necessary) lung biopsy. Options are limited for therapies to slow progression. Lung transplantation is the only curative intervention if the patient is a candidate for one.
read more
Load more
Share
Ask Questions
Take Notes
Download Slides
Report Mistake
Comments
show all Show less
My Notes
show all Show less
Learning Material 2
show all Show less
Report mistake
Transcript
0 of 0

00:03 We do use invasive tests in patients presented with ILD, but not all patients. 00:09 We might use these tests, if we are unsure about the cause of the interstitial lung disease, and also to confirm the histological subtype of pulmonary fibrosis where there is a UIP which does not respond well to treatment, or an NSIP which responds reasonably well to treatment in some patients. 00:25 The invasive tests that we do are bronchoscopy with a lavage to get a cell count. 00:31 The presence of lymphocytes would indicate that somebody may have sarcoidosis or a hypersensitivity pneumonitis rather than a pulmonary fibrosis. 00:39 We can also do a transbronchial biopsy during bronchoscopy to get a small amount of lung parenchymal tissue, and that is useful for diagnosing sarcoidosis and hypersensitivity pneumonitis, but it is unusual for that to be good enough to identify pulmonary fibrosis. 00:55 In addition, bronchial biopsies and lymph node biopsies in the ultrasound control, EBUS lymph node biopsies, can be useful for diagnosing sarcoidosis. 01:04 So bronchoscopy is actually mostly useful for identifying the presence of sarcoid or hypersensitivity pneumonitis rather than confirming the presence of pulmonary fibrosis. 01:14 To be honest, the only true way to be sure about the presence of pulmonary fibrosis is to do a surgical biopsy. 01:21 However, this is very invasive. 01:24 It requires a few days in the hospital, and there is an associated risk of the anesthetic, and that is worse because these patients are presenting with poor lung function in the first place. 01:34 And in addition, in some patients, the actual acts of doing a biopsy can precipitate the duration in the patient's pulmonary fibrosis as well. 01:42 So we reserve doing surgical lung biopsies for the younger cases and the more unusual presentations where it is not clear exactly what is going on. 01:54 Treatment of fibrosis is difficult. 01:56 It's not possible as yet for us to give a medication that will reverse established collagen heavy fibrotic changes in the lung. 02:07 So in general, treatment is more effective for the inflammatory form, the NSIP form, which is why it is important to distinguish NSIP from the UIP using the CT scanning, and occasionally, histology. 02:19 For these patients, we will use systemic corticosteroids, often quite high doses and often for prolonged periods and occasionally, we use other immunosuppressants such as cyclophosphamide. 02:30 Steroids seem to be very effective in reducing the fibrosis due to drug radiotherapy or after adult onset to respiratory distress syndrome. 02:43 The more fibrotic form of pulmonary fibrosis, UIP, is as I said resistant to medications. 02:48 But there are two main treatments we might use in those circumstances. 02:51 One is N-acetylcysteine, largely as an antioxidant, and the second is there are a couple of new medications which seem to be able to slow the progression of pulmonary fibrosis. 03:03 One of which is pirfenidone. 03:06 They're not terribly effective, and the jury is out about whether they are going to be infect mortality in long-term, but the evidence at the moment shows that they might slow down the deterioration in lung function. 03:21 In addition, you need to think about supportive therapy. 03:25 We tend to consider that pulmonary fibrosis might be exacerbated or stimulated by gastro-oesophageal reflux with aspiration of acid into the lungs, and therefore, we may consider using proton pump inhibitors in the patient, especially of those who got symptoms of reflux. 03:42 In addition, as the patient deteriorates in the big developing respiratory failure, they will need long-term oxygen therapy, they may need pulmonary rehabilitations to try and improve their exercise tolerance and they may need treatment for cor pulmonale with diuretics to get rid of ankle edema and so on and so on.

The lecture Pulmonary Fibrosis: Invasive Tests and Treatment by Jeremy Brown, PhD is from the course Interstitial Lung Disease (ILD).

Which of the following is an unlikely clinical association?

Which of the following techniques is used for histological diagnostic confirmation of interstitial lung disease?

Which of the following diseases is best diagnosed with endobronchial ultrasonographic biopsies?

Which of the following is NOT a useful treatment modality for treatment of pulmonary interstitial fibrosis?

Which of the following diseases is best treated with anti-fibrotic agents and N-acetylcysteine?

Which of the following diseases is known to exacerbate the symptoms of pulmonary fibrosis?