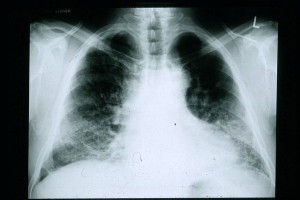 00:00 Pulmonary fibrosis is the commonest cause of interstitial lung disease, and the most important clinically. 00:10 As mentioned already, it is due to an infiltration of interstitium and alveoli with inflammatory material and increased extracellular matrix and collagen and fibroblasts. This is normally in a bibasal distribution, usually subpleural, usually relatively symmetrical, and importantly, former fibrosis of the idiopathics type is generally a progressive disease. 00:40 This infiltration of the alveoli and interstitium with extra material makes oxygen diffusion from the alveolus into the pulmonary capillary much slower. So uptake of oxygen as measured by a transfer factor will be reduced in pulmonary fibrosis. There are multiple underlying causes of pulmonary fibrosis, but idiopathic is by far the commonest. And there's really no idea exactly why these patients have pulmonary fibrosis. It is commoner in patients who smoke and in patients who have had occupations where there has been dust exposure, suggesting there is some form of environmental insult that underlies why these patients might develop disease. In the United Kingdom, the incidence of idiopathic pulmonary fibrosis is five people per 100,000. This table describes the differences between the different causes of pulmonary fibrosis. At the top, we have idiopathic disease, which is as we mentioned, is a bibasal symmetrical progressive disease tends to affect men. 01:38 The median age of onset is 70 years. There is a very similar disease but that's associated with connective tissue diseases such as rheumatoid arthritis, systemic sclerosis, and dermatomyositis. 01:49 This is a more even distribution between men and women, and tends to affect younger patients. 01:53 But again, it's a bibasal symmetrical disease and can be progressive, although overall, the prognosis of connective tissue associated pulmonary fibrosis is much better than idiopathic pulmonary fibrosis. Then you may get diseases such as end-stage of sarcoidosis or hypersensitivity pneumonitis where the disease is not bibasal distribution but tends to be upper lobe disease. As I have already mentioned, both sarcoid and hypersensitivity pneumonitis may cause pulmonary fibrosis, but this tends to be an upper lobe distribution rather than a basal. Then there are some causes of pulmonary fibrosis which often start with an acute onset, such as drug toxicity, radiotherapy, and after, an episode of adult respiratory distress syndrome. So, how does pulmonary fibrosis present? Well, usually, it presents with exertion of dyspnoea. The patient would say, “I have been getting breathless and more breathless over the past few weeks or few months.” Sometimes the patient may have a cough as well, which is usually derived and can be productive of a clear phlegm. When you talk to the patient and discuss their background history and their social circumstances, you may identify potential cause for pulmonary fibrosis such as a history of rheumatoid arthritis, somebody who maybe a farmer that have farmer’s lung, one of the forms of hypersensitivity pneumonitis or they could have worked with asbestos in the past, and therefore, have pulmonary fibrosis due to asbestosis. In addition, they could have had radiotherapy or chemotherapy, and that might be identified when you take their drug history in their past medical history. And other questions you may want to ask in this always is a little unusual when you ask the patients whether they have any pets such as birds or any specific hobbies, because hypersensitivity pneumonitis tends to be dictated by exposure to pets or hobbies or specific occupations.

The lecture Pulmonary Fibrosis by Jeremy Brown, PhD is from the course Interstitial Lung Disease (ILD).

Which of the following statements regarding pulmonary fibrosis is FALSE?

Which of the following is a form of progressive pulmonary fibrosis?