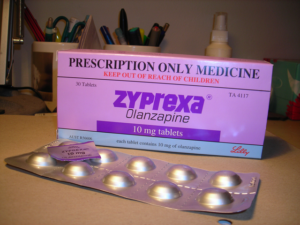 00:01 Let's move on to treatment of psychotic disorders. So we have a very long list. So I am going to divide up the classical drugs into drug classes for you. The phenothiazine, the thioxanthenes and the butyrophenones. Okay, the classic antipsychotic drugs have high antidopamine or dopamine receptor activity. These drugs the first ones work at the D2 receptor. 00:29 They are more effective and they have fewer side effects. They are very very well absorbed. They cross the blood brain barrier easy which I think is very important for a disease that occurs mostly in the brain. They have very long half lives. 00:42 Now I will mention too that they do have interactions with the cytochrome system and so patients who are taking cytochrome inhibitors will have a prolonged action and perhaps even a toxic reaction with these medications. These drugs take a long time to have an effect. And all of them block histamine receptors except for haloperidol. Looking at the novel agents used in psychotic disorders, you can see that the novel agents are very similar to the novel agents being used in bipolar disease. Novel agents act through both dopamine and serotonin receptors. That's what makes them a little bit different. 01:27 Generally speaking, you are going to get fewer extrapyramidal side effects than the classic drugs. Clozapine is a D4 and 5HT2 blocker. Olanzapine is a weak D2 inhibitor and a strong serotonin 2A agent. And this agent has multiple effects. 01:53 The newer agents effectiveness have led to a new theory: The serotonin hypothesis of schizophrenia. So we used to talk about psychosis being exclusively a dopamine kind of mediated disease but because we see that these new agents have anti-serotonin or serotonin effect, we now have added serotonin to our understanding of how schizophrenia works. So let's talk about the use of antipsychotics in schizophrenia. Antipsychotics reduce the positive symptoms of schizophrenia. Antipsychotics have few effects on the negative symptoms. Clozapine is effective in refractory cases and newer agents are more effective than the older cases in what we call "negative symptoms". So what do we mean by positive and negative symptoms. A positive symptom is something that seems very aggresive and overt to you. So it's those people who perhaps maybe violent or verbally abusive. 02:49 Negative symptoms are the anhedonic kind of reactions where they don't enjoy anything, they become withdrawn, we call those negative.

The lecture Psychotic Disorder Medication – Antipsychotics by Pravin Shukle, MD is from the course CNS - Pharmacology.

Which of the following is NOT a characteristic of the classical antipsychotic medications?

Which of the following symptoms is least likely to be treated by typical antipsychotic medications?