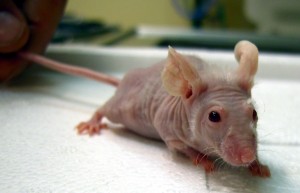 00:01 Now that you know all about transcription and translation, I would like to introduce you to genetic mutations and DNA repair. The ability for a cell to be able to repair its own DNA is critical for its existence. By the end of this lecture, you will be able to describe some of the means of DNA repair as well as distinguish between point and chromosomal mutations and discuss the implications of a variety of different mutation types. 00:31 Let us begin by looking at what a mutation is. It is something that is a change in DNA that is caused by a mutagen, something that causes damage in DNA. There are a number of different mutagens we could be exposed to. You know that the sun can cause damage to DNA and we can have radiation, we can have all kinds of different chemicals that cause effects and disrupt the DNA as well as some things we consume in our diets. Lots of things are mutagenic and cause damage to the DNA. So it is very important that we are able to fix those things. First of all though, sometimes DNA polymerase makes mistakes. Thank goodness. 01:13 They have three prime, five prime exonuclease activities. What on earth does that mean? What that means is that the DNA polymerase I think it is a little van driving down the DNA. And it is driving down the template strand or going along the template strand and the guys who are throwing out the nucleotides that are complimentary to the template strand kind of mess up and there is a guy on the tailgate checking. So we're driving down on three prime, five prime strands everything is good and the guy on the tailgate yells "Oh! Stop." We would back up the van and they excise the bad nucleotide and put down a good nucleotide in its place and continue to venture on down the DNA template strand. So excision repair, we can have three prime, five prime exonuclease activity meaning we can remove DNA in three prime, five prime directions on the newly synthetized strand. It is pretty cool that that self-check mechanism is in place all the time. On occasion, things go wrong and we miss the repair. The guy on the tailgate falls asleep, who knows what went on, but it gets missed. There are all sorts of other mechanisms in the cell to take care of DNA mistake. You will recall that we have talked about caretaker genes and things like that that monitor DNA constantly. Another way that we could see damage to DNA or a way we can see the damage is through ultraviolet radiation. This is a mechanism that is known fairly well, ultraviolet light causing damage to DNA in which we have thymine residues forming a dimer, so they dimerized. They stick together and this causes a bump in the helix and that is not a very good situation. There is an enzyme that comes along that is responsible for that. That will bind to the damaged DNA, which is called photolyase and photolyase will do the repairs. Now the interesting thing about photolyase is it is dependent upon activation by visible light. UV light does the damage, but visible light does the repair. Some connection I don't know, but the thymine dimer is cleaved and the bump is taken out of the DNA backbone and everything is moved out because of photolyase. This kind of damage goes on all the time and our system is always checking out DNA and making repairs. 03:58 We can have excision repairs happen with damaged DNA. So we have one base pair that has been messed up or section of bases that have become mutated by some sort of mutagen and excision repair enzymes come along and cleave out the pieces of DNA. It cut them on both ends where things have been changed and then DNA polymerase can come along and replace the removed nucleotides. 04:29 Generally, we see DNA polymerase too come into play with repair of mutations. Really great system for checks and balances making sure that our DNA integrity is maintained.

The lecture Proofread and Repair Mechanisms by Georgina Cornwall, PhD is from the course DNA Repair & Genetic Mutations.

What is the primary mechanism for DNA proofreading

Which of the following statements are CORRECT regarding the mutagens? (choose all that apply)

Very helpful on understanding the basics of the repair mechanisms.

Very helpful on understanding the basics of the repair mechanisms.