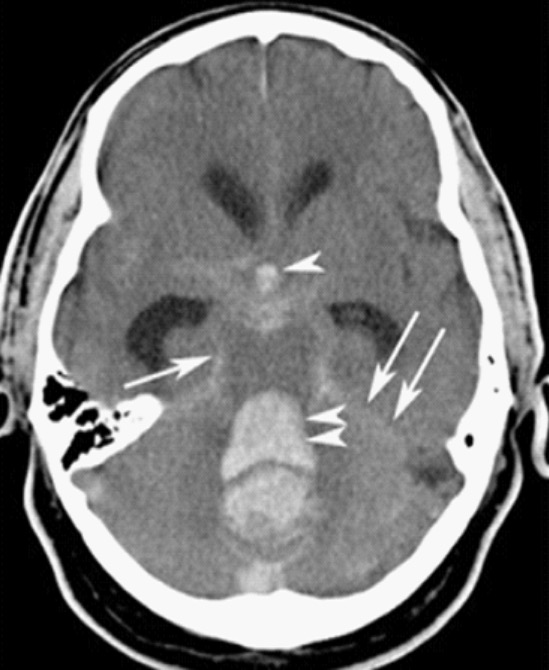 Uncontrolled Hypertension
Although hypertension is defined as a blood pressure of &gt; 130/80 mm Hg, individuals can present with comorbidities of severe asymptomatic or “uncontrolled” hypertension (≥ 180 mm Hg systolic and/or ≥ 120 mm Hg diastolic) that carries with it a significant risk of morbidity and mortality. Despite the prolonged presence of hypertension, there may be no signs or symptoms of end-organ damage (e.g., brain, eyes, heart, kidneys) until function becomes decompensated or severely impaired. Individuals may present with clinical symptoms such as chest pain due to MI or focal neurologic changes associated with a cerebral infarction or intracranial hemorrhage. Diagnosis is made using serial blood pressure measurements and testing for end-organ damage. Management includes lowering the blood pressure and treating specific organ damage.
read more
Load more
Share
Ask Questions
Take Notes
Download Slides
Report Mistake
Comments
show all Show less
My Notes
show all Show less
Learning Material 2
show all Show less
Report mistake
Transcript
0 of 0

00:01 Hello, and welcome back to the nephrology curriculum. 00:04 Today, we're gonna be talking about secondary hypertension. 00:07 So, interestingly, hypertension is actually the most common disease-specific reason for office visits of adults to physicians in the US. 00:16 Now, when we think about the definition of hypertension, it really depends on who's defining it. 00:23 So, by the Joint National Committee which guidelines were produced in 2014, it's really based upon the average of two or more properly measured readings of each of two or more visits of an initial screen. 00:35 Normal blood pressure is considered a systolic of less than 120 mmHg, a diastolic of less than 80 mmHg. 00:42 Prehypertension is considered a systolic pressure of between 120 and 139 mmHg, and a diastolic between 80 and 89 mmHg. 00:52 And finally, hypertension is staged in two stages. 00:56 Stage 1 is considered a systolic blood pressure of 140-159 mmHg with a diastolic between 90 and 99 mmHg. 01:03 In Stage 2, is a systolic greater than 160 mmHg and a diastolic greater than or equal to 100 mmHg. 01:09 Now, over the last couple of years, we've had some interesting randomized control trials and therefore, the American College of Cardiology and the American Heart Association really have provided newer targets based on the most recent evidence. 01:23 A normal blood pressure, according to the ACC and AHA, is considered, again, less than 120 over 80 but in elevated blood pressure, now, is considered a systolic between 120 and 129 mmHg with a diastolic of less than 80 mmHg. 01:40 Stage 1 hypertension is now considered a systolic between 130 and 139 mmHg, and a diastolic of 80-89 mmHg. 01:47 Stage 2 by the ACC and AHA is considered a systolic greater than or equal to 140 mmHg and a diastolic greater than or equal to 90 mmHg. 01:56 Now, these are updated targets and I want you to stayed tuned because as new data comes in, these might be moving targets for you. 02:04 So, when we think about hypertension, the majority of physician visits for hypertension are due to what we used to term essential or primary hypertension but about 10% of those cases are actually due to secondary hypertension. 02:20 When we think about the pathogenesis of primary hypertension, it's really multifactorial and the purpose of this slide is not to have you memorize it but to really understand that there's so many different things that go into primary hypertension. 02:35 We have things like an increase in sympathetic nervous tone, we have activation of RAS that will increase cardiac output, we also have local and circulating regulators that will ultimately increase peripheral vascular resistance that ultimately will manifest into primary hypertension. 02:53 This is in contrast to the pathogenesis of secondary hypertension where the pathogenesis is related to the underlying condition. 03:01 This is due to things like renovascular disease, a functioning adrenal adenoma, sleep disordered breathing, medications either iatrogenic or elicit substances, things like black liquorice, typically European, and then finally, coarctation of the aorta. 03:17 So, when you have that patient sitting in front of you, it's very difficult sometimes to distinguish between primary and secondary hypertension but there are a few clinical clues that can suggest the presence of a secondary cause. 03:31 This includes things like young age of onset, typically before the third decade. 03:36 A sudden onset of hypertension in somebody who normally was normotensive or uncontrolled or refractory hypertension. 03:46 We can also see things like hypokalemia in association with metabolic alkalosis, often times without the use of diuretics. 03:54 We can also see a patient who, perhaps, has features of a recognized underlying cause. 04:00 For example, new onset of hyperglycemia in the setting of weight gain characterized by truncal obesity, a moon facies, very suggestive of Cushing's syndrome. 04:10 So, when we think about the causes of secondary hypertension, it's easiest to group them into different categories. 04:18 So, we can group them into renal categories. 04:21 These are things like renovascular hypertension and renal parenchymal hypertension. 04:26 Endocrine causes or endocrinopathies, these are things like primary hyperaldosteronism, Cushing's syndrome or Cushing's disease, pheochromocytoma, hyperreninism, and hypothyroidism. 04:41 We can also have cardiovascular causes like sleep disordered breathing with obstructive sleep apnea and coarctation of the aorta. 04:49 Now, I want you to notice that I've bolded a couple of these topics and that's because we're gonna be going through those today. 04:55 It's also because that's what you're going to encounter most often in the clinical scenario and that's what you're going to be responsible for on your boards. 05:03 There's a couple of other causes to think about in terms of secondary hypertension. 05:08 Inherited causes, these are a little bit more obscure but you should be aware of what they are. 05:14 They are things like glucocorticoid-remediable aldosteronism. 05:18 It's quite a mouthful but essentially, what that is ACTH-dependent aldosterone production so people have mineralocorticoid excess. 05:25 There's also something called syndrome of apparent mineralocorticoid excess, another mouthful, but this is something that actually causes excess cortisol levels that activate mineralocorticoid receptors. 05:38 There's Liddle's syndrome which we'll be talking about in our potassium lecture. 05:43 This is a gain-of-function mutation at the epithelial sodium channel. Gordon's syndrome, which is essentially like a gain-of-function in the sodium chloride cotransporter in the distal convoluted tubule. 05:53 And then congenital adrenal hyperplasia, the 11beta-hydroxylase variant which, again, is going to cause mineralocorticoid activation. 06:01 Now, there's some medications and supplements that you should be aware of that can cause hypertension as well. 06:07 Things like glucocorticoids, nonsteroidal anti-inflammatory drugs, combined oral contraceptives, calcineurin inhibitors, these are medications we give to organ transplant recepients, pseudoephedrine, caffeine, which I think many of us probably drink, and licorice. 06:25 And when I talk about licorice, I'm talking about typically black licorice that is not the typical kind that we get in the United States but typically abroad.

If a 65-year-old man has a blood pressure of 148/88 mm Hg, he has what stage of hypertension according to the ACC/AHA classification?

Which of the following medications can cause hypertension?

clear easy but too fast. when i put it on 0,75 speed it was much easier to comprehend.

clear easy but too fast. when i put it on 0,75 speed it was much easier to comprehend.