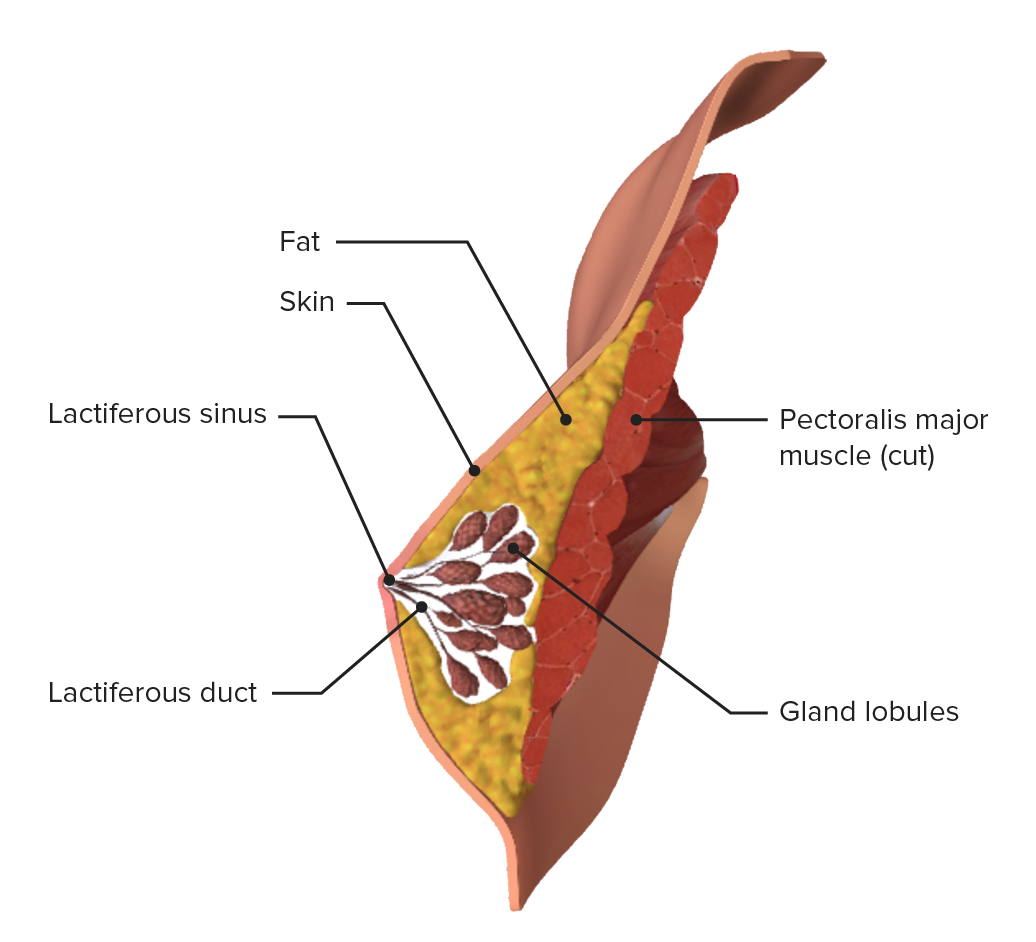 Breastfeeding
Breastfeeding is often the primary source of nutrition for the newborn. During pregnancy, hormonal stimulation causes the number and size of mammary glands in the breast to significantly increase. After delivery, prolactin stimulates milk production, while oxytocin stimulates milk expulsion through the lactiferous ducts, where it is sucked out through the nipple by the infant. Breastfeeding has many benefits for the mother and baby, including a decreased risk of infections, GI distress, and atopic disease for the infant; and a decreased risk of anemia, cardiovascular disease, and breast and ovarian cancer for the mother. True contraindications to breastfeeding exist but are quite rare. Important clinical conditions associated with breastfeeding include engorgement, mastitis, galactocele, breast abscess, and infant jaundice.
read more
Load more
Share
Ask Questions
Take Notes
Download Slides
Report Mistake
Comments
show all Show less
My Notes
show all Show less
Learning Material 2
show all Show less
Report mistake
Transcript
0 of 0

00:01 While we are considering increased energy demands, why not have a quick conversation about argument of breastfeeding versus formula feeding, and as it turns out who would guess, but we are recommended that breastfeeding is recommended as the best source of nutrition for the baby. 00:23 Clearly, sometimes the mother is not capable of making milk or worse excuses, that it doesn't quite fit the lifestyle because pumping is certainly an option. 00:35 We can save the milk and the baby can be fed purely off of breast milk. 00:40 The American Academy of Pediatrics as well as the American Medical Association, as well as the World Health Organization all say that the best option by far is breast milk. 00:55 And even the American Academy of Pediatrics recommends that we have exclusively breast milk, for the first six months. 01:04 And there are a lot of different reasons for this. 01:07 Ideally, up to 12 months, and beyond perhaps even to two years if it's something that is well tolerated, but the first 12 months, especially six are considered of most importance. 01:22 And you're probably familiar the reasons behind this, it's going to help defend against infections because of a lot of immunoglobulins, and stop an antigens are passed through breast milk to the child. 01:37 In addition to that a feeding with breast milk, because of this passage of antigens, can relieve allergies. 01:45 And I think a lot about this currently, why are we seeing such an increase and allergies in children, and one of the reasons could perhaps be because less mothers were breastfeeding, and less mothers breastfeeding for that important first year of life, especially the first six months. 02:08 Another reason that suggested just as sort of a side note is that the increased incidence of cesarean section could lead to these increased allergies. 02:18 And that has to do with development of gut flora and fauna and protection against our flora and protection in that sense. 02:27 And so apparently not passing through the vaginal canal creates a different culture of flora in the gut of babies. 02:37 And so also adds to the idea of allergies. 02:40 So just another thought to put in mind while I'm on the soapbox up here, that's something I'm interested in. 02:47 So of course formula is a great option. 02:50 Should the mother not be able to feed the baby for some reason, either because it's a severe inconvenience or she is not releasing enough milk certainly, in the modern day. 03:03 We have formula available and it is a relatively good source of all the nutrients needed. 03:10 So there is tons more to know obviously, but in the very early days, these are the things to consider breast milk versus formula. 03:19 It's a good argument and now you know who supports it.

The lecture Newborn Feeding by Georgina Cornwall, PhD is from the course Nutrition.

Which immunoglobulin is present in great amounts in breast milk?

How many months should an infant be exclusively breastfed?