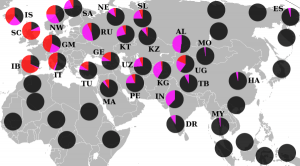 Biology for Physicians: Formal Genetics and Population Genetics
Mendel’s laws, phenotype and genotype, recessive and dominant. Do these terms sound familiar to you from your biology lessons? This article regarding formal genetics will introduce you to all important genetic fundamentals regarding biology that you need to know as a physician. By studying and revising the contents of this article, you will be in a better position to do well both in your preclinical studies as well as in your preliminary exams. This content will help you master the key fundamentals of Genetics.
read more
Load more
Share
Ask Questions
Take Notes
Download Slides
Report Mistake
Comments
show all Show less
My Notes
show all Show less
Learning Material 2
show all Show less
Report mistake
Transcript
0 of 0

00:01 In this lecture, we’ll be exploring the Hardy-Weinberg law. I’m sure you’ve explored it before. 00:07 But how long has it been? And yes, it is one of those things that you need to know for your medical licensure exams. Population genetics is the basis of Hardy-Weinberg law. 00:19 Why do we really care about population genetics and the Hardy-Weinberg law? We care because we are given statistics very often about the frequencies of various genetic disorders. 00:31 So, we need to understand where those numbers come from. The things that go into population genetics are obviously genetic factors, the environmental factors that surround the genetic frequencies, and then societal factors. A number of different aspects influence the frequency of alleles in populations. That’s what we’re really talking about here. We can determine the frequency as well as distribution between various populations. For example, some cultures or some countries may have higher incidence of one variant of a gene, whereas others would have less frequency of that. 01:21 So, it’s applicable because again, we get these numbers in our genetic counseling and use them as principle for diagnosing or predicting the possibility of these various genetic outcomes. 01:38 How do we actually measure genetic variation? It turns out that, you probably recall, we use an equation to measure genetic variation. But don’t be afraid, I can walk you through this one. 01:53 Before we get into the details of the equation, I wanted to introduce to you or remind you of a condition that’s relative to medicine. Why not use it as an example as we work through calculating some allelic frequencies? First of all, you probably would recall that HIV requires two proteins in order to dock onto the cells. It will connect one and then the other. Then the cell that it’s going to infect will let it in. Of course, it doesn’t intend to but that’s the trick that HIV uses to get in. 02:31 I’m going to tell you a brief story from 1980's or so. A lot of people were undergoing HIV testing. 02:42 Some particular number of people, I think it was in San Francisco, but went in to get tested. 02:50 They showed up positive for HIV and went back in for a six-month check to see how the progression of the disease had gone. It showed up negative. So everyone thought, the doctors thought that they had made some grand mistakes and how bad this was going to be because we had misdiagnosed people. They’d changed their whole life plan thinking that they would eventually die of AIDS. 03:17 Now, we're testing the blood and there’s nothing there. They went back to test the original samples and found that in the original samples, indeed there was HIV virus. So, there became a big query about precisely what had happened in that situation. It turns out that there had been a mutation of one of the proteins that’s required for the HIV virus to dock and actually enter the immune system cells and destroy the immune system and result in actual full blown AIDS. The regular protein, we call CCR5 protein. The mutant allele, we’ll call ΔCCR5, so ΔCCR5. Delta is a sign we often use for the mutant form. You will recall delta means change in. So, that makes sense that it’s used to denote the mutant form of a particular allele. In actuality, this mutation provides HIV resistance. Yes indeed, HIV gets into the blood but it doesn’t end up causing an infection because it cannot enter the cells and take over or destroy the immune system. This mutation turns out to have originated somewhere in Northern Europe. It’s supposed that perhaps it was a plague that used similar access mechanisms to the cells that may have selected for this mutant CCR5 allele. 05:03 So, it has a higher prevalence in Northern Europe. As we spread South, well, we’ll look at how gene flow has happened later on in the lecture.

Which proteins on the HIV surface are responsible for entry into host cells?

How will a mutant CCR5 protein (CCR5 delta) affect infection with HIV?