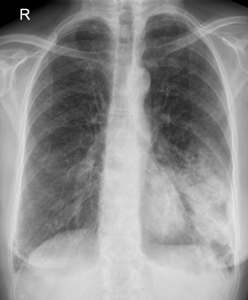 Pneumonia — Classification, Diagnosis and Treatment
Its high morbidity and mortality make pneumonia one of the major infectious diseases worldwide. Learn about the pathogenic causes as well as the individual types of pneumonia, in order to be able to reliably differentiate and treat it in clinical practice.
read more
Load more
Share
Ask Questions
Take Notes
Download Slides
Report Mistake
Comments
show all Show less
My Notes
show all Show less
Learning Material 2
show all Show less
Report mistake
Transcript
0 of 0

The lecture Pneumonia: Treatment by Jeremy Brown, PhD is from the course Infections of the Respiratory Tract.

Which of the following antimicrobials is NOT considered the appropriate treatment for the mentioned type of pneumonia?

A patient has pneumonic consolidation. His blood pressure is low, and his lips and mouth appear dry. He is connected with an IV line and fluids were given for correction along with broad spectrum antibiotics. However, his blood pressure didn't improve. What is the next best step of management of the patient?

Which of the following is a good sample to detect antigen of Legionella pneumonia?

Which type of pneumonia is commonly encountered in patients with active HIV infection?

Which organism is most likely to cause pneumonia in an HIV positive patient?

Which of the following is considered as the empirical therapy for a patient with a moderate type of community-acquired pneumonia according to the UK guidelines?

A 45-year-old male patient has been diagnosed with pneumonia. He appears confused. His respiratory rate is 24 breaths per minute and blood pressure is 120/88mmHg. Oxygen saturation is 95%. His urea level is 4 mmol. What is the preferred empirical treatment for this patient?

A patient diagnosed with pneumonia was hospitalized for 10 days. Initially, he was responding to Coamoxiclav and clarithromycin. However, over the days, he began to deteriorate. Another antibiotic of ticarcillin was added to which he responded. What is the probable organism?

Which of the following tests indicate an improvement or response to treatment for pneumonia?

Which of the following are methods to monitor the progress of the treatment of pneumonia if the patient is not recovering post treatment?

Which of the following is NOT a complication associated with pneumonia?