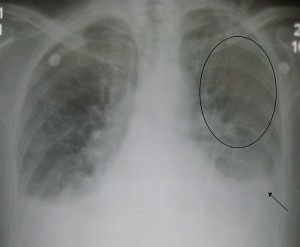 00:00 often with thickened heart muscle. Now, there are a number of compensatory mechanisms that the body sets off when it sees heart failure. Remember, I mentioned them just a few moments ago. What are the compensatory mechanisms? Well, let’s think, why would the body compensate for decreased cardiac output, for decreased pumping of the blood? The reason the body compensates is because it interprets heart failure as if there had been a hemorrhage - a blood loss, or dehydration. In other words, the reduced pumping ability, the body interprets as, “Oh, there’s a lack of blood from a hemorrhage or there’s a lack of fluid in the circulation because of dehydration”. And it sets off a whole bunch of compensatory mechanisms aimed at holding on to fluid, water and salt. 00:55 Unfortunately, this is exactly the opposite of what we would want because in holding on to fluid, you actually create the setting where patients put some of that fluid into the tissues, both in the legs as edema or in the lung as pulmonary edema. So, the activation of these… of the neurohumoral system that is central nervous system initiated activity to correct the heart failure situation actually makes the situation worse. 01:26 These systems work great if there’s dehydration - you’re caught in the desert without water. 01:31 They work great if there’s a hemorrhage, you’ve been cut somewhere or you’re bleeding from an ulcer in your stomach, but they work unfortunately, in a negative manner in a patient with heart failure. Let’s just talk for a moment about why these compensatory mechanisms work. They work because of something I mentioned before, Starling’s Law. The so called "Rubber Band Law of the Heart" - the more you fill it, the more it contracts. So, what the compensatory mechanisms are trying to do is to increase the filling of the heart so it will squeeze more. As I’ve said, unfortunately, that leads to elevated pressures that back up in the system and result in edema. But, the rubber band law of the heart says that the force of contraction is related to how much you stretch the heart muscle cells and this increases contractility. So, you see why the body is trying to increase the pumping ability of the heart and this works fine if it’s a hemorrhage or dehydration, but it doesn’t work well when the patient has heart failure. So remember, stroke volume is the number of cubic centimeters that the heart puts out with each time it squeezes times heart rate, that’s cardiac output. So, when we have a reduction in stroke volume because the heart has been injured, sometimes you’ll even see the heart rate go up because the central nervous system says, “Oh, cardiac output is falling, we have to increase the heart rate, we have to increase our ability to hold on to salt and water and increase the blood volume and use the Starling law to increase the contractility of the heart.” Again, unfortunately, it’s not the right setting for that and this leads to overfilling of the circulation, increased pressures in the circulation and increased fluid getting out into the lungs and into the tissues. So, the central factor in heart failure, of course, is depression of the heart muscle at least for systolic heart failure. But also, in diastolic heart failure, the heart is supposed to actively relax and there’s also depression of that, but the commonest form of heart failure, as you’ve seen in the previous slide, was systolic and it is usually because there’s been some injury to the heart muscle, most commonly from ischemic or coronary artery disease with heart attacks. And again, we’ve talked about the compensatory mechanisms, here are the compensatory mechanisms listed. 04:01 First of all, they're initiated by the central nervous system. One of them is a signal that’s sent to the kidneys and that the kidney actually does on its own. The kidney is the regulator of the blood pressure in the body, it sees a drop in blood pressure, a drop in cardiac output and it releases compounds in something called the renin-angiotensin system which holds on to salt and water. It's hormones that actively tell the kidney, “Hey, don’t pee out… sodium and water, hold on to it because the circulatory system needs some volume.” There are also hormones that are released from the pituitary, so called anti-diuretic hormone, which tells the kidney, “Hey, hold on to water, don’t let the water go out in the urine.” In addition, you also will have activation of the sympathetic nervous system which is part of the flight or fight system. This sends adrenaline to the heart muscle to try and get it to contract more vigorously and it also clamps down a little bit on the periphery in an attempt to shrink the volume that the heart has to pump into. All of these compensatory mechanisms you can see, they work great if we’re talking about dehydration or hemorrhage, but they work in the wrong direction when the patient already has a depressed left ventricle. 05:26 The other thing that happens is that the heart muscle remodels, it reconstructs itself, if you will. You can see in this diagram on the left, there’s one form of remodeling - left ventricular hypertrophy where the ventricle markedly thickens. For example, with aortic stenosis, as we talked about with the patient in the last lecture. On the other side is the sort of thing you see in a cardiomyopathy. The heart dilates, thickens a little bit, but predominantly what it does is it dilates. And you’ve all heard someone say, “Oh, so and so is in trouble, they have a ‘big heart’.” That’s because the heart’s dilated. That’s often the final stage of heart failure when the heart has exhausted all of its other compensatory mechanisms to get the cardiac output up, then you start to see this dilatation of the left ventricle. Now, again, we talked about the different

The lecture Pathophysiology – Heart Failure by Joseph Alpert, MD is from the course Cardiac Diseases.

Which of the following chemical compounds increases the heart rate?

This lecture couldn´t be clearer! I understood everything completely even though I'm not even a native english speaker

cardiac muscles hypertrophy
By Olanya A. on 17. May 2019 for Pathophysiology – Heart Failure

Many time i do not understand the pathology of heart failure, especially on compensatory mechanisms

HF patho
By Elizabeth I. on 17. February 2019 for Pathophysiology – Heart Failure

I was able to understand the topic well. Plus questions are provided to evaluate my learning. It was very good.
By Maritoni Jehannie G. on 28. July 2018 for Pathophysiology – Heart Failure

I was able to understand the topic well. Plus questions are provided to evaluate my learning. It was very good.

This lecture couldn´t be clearer! I understood everything completely even though I'm not even a native english speaker

cardiac muscles hypertrophy
By Olanya A. on 17. May 2019 for Pathophysiology – Heart Failure

Many time i do not understand the pathology of heart failure, especially on compensatory mechanisms

HF patho
By Elizabeth I. on 17. February 2019 for Pathophysiology – Heart Failure

I was able to understand the topic well. Plus questions are provided to evaluate my learning. It was very good.
By Maritoni Jehannie G. on 28. July 2018 for Pathophysiology – Heart Failure

I was able to understand the topic well. Plus questions are provided to evaluate my learning. It was very good.