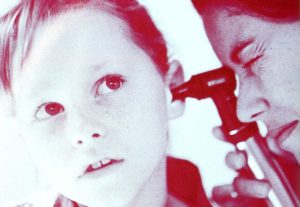 00:01 For otitis externa, we’re talking now about the ear canal. 00:06 We’re worried about different pathogens and different causes. 00:10 This is classically called swimmer’s ear. 00:13 And it’s from a chronically moist external auditory canal. 00:17 It’s associated with prolonged redness or a foreign body in the ear canal. 00:22 Sometimes kids will put something in there and then forget about it and you can get an infection. 00:26 It’s usually associated with Pseudomonas species. 00:29 But other bacteria are possible such as E. coli or staph aureus. 00:35 So here’s a particularly bad case of otitis externa. 00:38 It should hurt a little bit to wiggle on the outside of the ear because you’re moving that canal. 00:43 And there should be frank purulent drainage or swelling visible directly on otoscopy. 00:50 You don’t need a bulb for this. 00:52 It’s on the ear canal itself. 00:54 So patients typically will have ear pain. 00:57 They’ll have pain with tugging on the outer ear and they there’ll be pus draining from their ear. 01:01 That’s your diagnosis. 01:04 How do we treat it? Topical ciprofloxacin drops are usually the trick. 01:09 They do treat pseudomonas. 01:11 Or you can use polymyxin ear drops which is a bit cheaper. 01:15 If it’s super severe, you can insert a wick into the ear to allow for penetration of the drops into the deeper part of the ear. 01:23 It’s not fun to place a wick and the child is not excited to receive one, but it may help the ear heal up a little bit faster. 01:30 Also, we can provide NSAIDs for pain and irritation. 01:34 So let’s turn now to mastoiditis. 01:37 That’s when ear infections go totally wrong. 01:40 This is basically an infection of the mastoid air cells in the skull behind the ear. 01:46 This usually starts with an acute otitis media or an otitis externa and then it spreads down to those air cells. 01:54 So this is usually caused by otitis media bacteria, although some bacteria are more likely to cause it than others, so the differential of organisms is a little bit different. 02:06 It can be caused by Strep pneumo, by Staph aureus and can also be MRSA and by group A strep and also by Pseudomonas, especially if there’s an otitis externa present. 02:20 So these patients can be fairly sick. 02:23 They may have fever. 02:24 They’re going to have significant ear pain. 02:27 You will notice a proptosis or a pushing forward of the affected ear. 02:32 And they will have palpation and pain to palpation behind their ear. 02:37 So if you press behind a protuberant ear and it hurts, that’s mastoiditis. 02:43 You can get a CT scan like this, which will show a opacification of those air cells in the mastoid area. 02:52 And may also show some bony destruction. 02:55 It’s sort of like an osteomyelitis of this skull as well. 02:59 Patients with mastoiditis, which is a rare complication of otitis media, are often admitted to the hospital for IV antibiotics. 03:08 Usually, we’ll start with something like ampicillin sulbactam unless we suspect a very invasive infection such as MRSA. 03:16 And usually, those look very severe and the patients are exceptionally ill. 03:20 Then we might cover for MRSA with either vancomycin or clindamycin. 03:24 And if there is an otitis externa associated with it, we might cover for pseudomonas with something like ciprofloxacin. 03:33 If there is an otitis media with it, oftentimes ear, nose and throat doctors will prefer to do myringotomy in addition to a surgical drainage of the lesion if surgical drainage is necessary. 03:44 And in those surgical cases as deemed by the ear, nose, and throat doctor, we will usually do either a mastoidectomy or a drain placement. 03:52 They may get an osteitis and then we have to have drainage of the bone in addition. 03:58 And we usually will go to surgery if there’s a case that’s not responding to IV antibiotics, likely we might suspect. 04:07 So that’s my review of all ear infections in kids. 04:11 Hey, thanks for your time.

The lecture Otitis Externa (Swimmer's Ear) and Mastoiditis in Children by Brian Alverson, MD is from the course Pediatric Emergency Medicine. It contains the following chapters:

Exposure to which of the following is a common cause of otitis externa?

Which of the following is the most appropriate therapy for a 7-year-old boy with a clinical diagnosis of acute otitis externa?

A child presents with fever, pain and tenderness behind the ear auricle and auricular proptosis. He has a recent history of otitis media. A CT scan shows opacification of mastoid air cells on the ipsilateral side. Which of the following organisms is the most likely cause?

A child presents with fever, pain and tenderness behind the ear auricle and auricular proptosis. He has a recent history of otitis media. A CT scan shows opacification of mastoid air cells on the ipsilateral side. Which of the following is the most appropriate type of management?

(1) 5,0 of 5 stars
covered well very important urgent/ER issues and specially their treatments
By Ndeye N. on 23. March 2019 for Otitis Externa (Swimmer's Ear) and Mastoiditis in Children

(1) 5,0 of 5 stars
covered well very important urgent/ER issues and specially their treatments
By Ndeye N. on 23. March 2019 for Otitis Externa (Swimmer's Ear) and Mastoiditis in Children