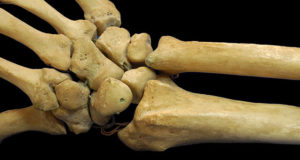 The lecture Osteon by Geoffrey Meyer, PhD is from the course Bone Tissue.

Which ONE of the following is NOT a component of an “osteon”?

Haversian canals are located in which type of bone?

Which of the following options best describes the system through which osteocytes obtain cell nutrition?

Which of the following options ONLY includes components of an osteon?

Which of the following refers to a series of microscopic tubes in the cortical bone for the passage of blood vessels and nerves?

Osteocytes are embedded in which of the following?

Which of the following best describes the histology of a cross section of haversian canals?