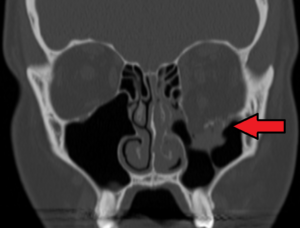 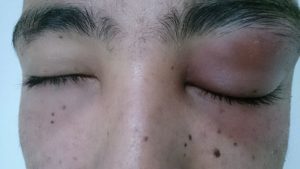 Preseptal (Periorbital) Cellulitits and Postseptal (Orbital) Cellulitis in Children — Symptoms and Treatment
Preseptal and orbital cellulitis are possible complications to paranasal sinusitis or trauma to the eye orbit. In preseptal cellulitis, the infection is limited to the eyelid and tissues anterior to the orbital septum, the condition is usually milder, eye vision and ophthalmological examination are usually normal, and medical antibiotic therapy with oral antibiotics is sufficient. Patients with orbital cellulitis have ophthalmoplegia, can be toxic, their vision is usually impaired, can have optic nerve edema, and usually require inpatient treatment with intravenous antibiotics. Surgical intervention is more common with orbital cellulitis.
read more
Load more
Share
Ask Questions
Take Notes
Download Slides
Report Mistake
Comments
show all Show less
My Notes
show all Show less
Learning Material 2
show all Show less
Report mistake
Transcript
0 of 0

00:00 So there are times when you simply can’t tell whether a patient has preseptal or orbital cellulitis. 00:08 You can’t tell because, let’s say, there is so much swelling they can’t even open their eyes so you can’t possibly tell whether it hurts or whether they’re looking in 1 direction or not. This definitely happens. In those cases, we’ll get a CAT scan. We don’t get CAT scans all the time because if we did we would cause too much radiation damage in children and would cause cancer in somebody. So first and foremost is the physical exam like we’ve discussed but if that’s not working we’ll get the CAT scan. So let’s look at this patient’s CAT scan. Here, we can see this patient has 1 eye that is farther forward than the other. The trick about reading CAT scans just as a reminder is as if you’re looking from the bottom of the patient up. So, reorienting this in space in your mind, the eye here that is abnormal is the one that’s farther forward. On the screen, this means it’s the left eye on the screen but that is this patient’s right eye because you’re looking from the bottom up. So we’ll get a CAT scan of this patient’s orbits to try and figure out what is involved. If the CAT scan shows a sinusitis and an invasion across that paper-thin bone, you’ve made your diagnosis of orbital cellulitis. There are other labs you see sometimes obtained in these patients. They are all pretty much useless. A CBC does not tell you whether this is infected or not, it’s infected. We’re arguing about 2 different diseases, both of which are caused by bacteria. So a CBC is not helpful, in fact it’s often normal and thus leaving you with nowhere to go except to say “it’s infected, I don’t know why I got that CBC.” Likewise, the blood culture is virtually negative, never positive. Occasionally, we have to do surgery on these patients to drain these abscesses and you may get an organism from that but typically because orbital cellulitis is a multi-infected infection with lots of different bacteria, a specific culture isn’t particularly useful. Okay, let’s look at the treatment of these 2 diseases because it’s different. We’ve decided this is either preseptal or orbital cellulitis. Preseptal cellulitis, oral antibiotics are usually sufficient, you don’t usually require IV antibiotics. We typically will give a first generation cephalosporin like cephalexin or if they’re allergic we might choose something like clindamycin, but we want something that’s going to treat both group A <i>Strep</i> and <i>Staph aureus</i>. Very very rarely, this can be MRSA. That would require clinda or if it’s very aggressively going to the child’s face they might end up on vancomycin. Flipside, orbital cellulitis, we’re going to start off with a drug like Unasyn. Unasyn is ampicillin/sulbactam. This is an effective broad-spectrum antibiotic. This is actually our first choice for sinusitis and we’re using the same drug because remember this infection comes typically from the sinuses. If it’s very severe or eye-threatening, we might do something like ceftriaxone and vancomycin to try and really broaden our coverage. We will often get a CT scan and look for abscesses in these patients. We’re not only using it for diagnosis, but for whether we actually need to go in and drain the lesion. We’ll have the help from our ophthalmologist and our ear, nose, and throat doctors to do surgery on that drainage if it’s needed. Likewise, ear, nose, and throat doctors often like to provide nose drops for the sinuses to help with facilitating of the drainage. They may use things such as saline or a short course of alpha-agonist drugs. In treatment of orbital cellulitis, the prognosis is generally excellent, they do fine, but occasionally complications can occur and I want to go through a few of those. The first is the abscess can extend intracranially. 04:10 Typically, this will be from a very virulent organism like MRSA. This can result in subdural empyemas, brain abscesses, or even meningitis. Patients may also develop clots and typically it would be a cavernous venous thrombosis. Those can require prolonged anticoagulation. Lastly and this is rare but it can happen, patients may develop septic emboli which go into the optic nerve and cause vision loss. That’s a devastating end result. So, in summary, orbital cellulitis and preseptal cellulitis are generally fairly easy to tell apart and it’s done so mostly clinically but we have the CAT scan as our back-up and we treat it aggressively with antibiotics but different antibiotics depending on which one it is. I hope you enjoyed that lecture. Thanks a lot.

The lecture Orbital Cellulitis and Preseptal Cellulitis: Diagnosis & Management by Brian Alverson, MD is from the course Pediatric Infectious Diseases. It contains the following chapters:

Which of the following tests may be helpful in distinguishing preseptal from orbital cellulitis in a patient who cannot open his eye?

Which of the following is appropriate in the management of pre-septal cellulitis?

Which of the following is a possible complication of preseptal cellulitis?

Clear explanations as usual. I particularly liked the conclusion at the end in the shape of "Take home messages".

Clear explanations as usual. I particularly liked the conclusion at the end in the shape of "Take home messages".