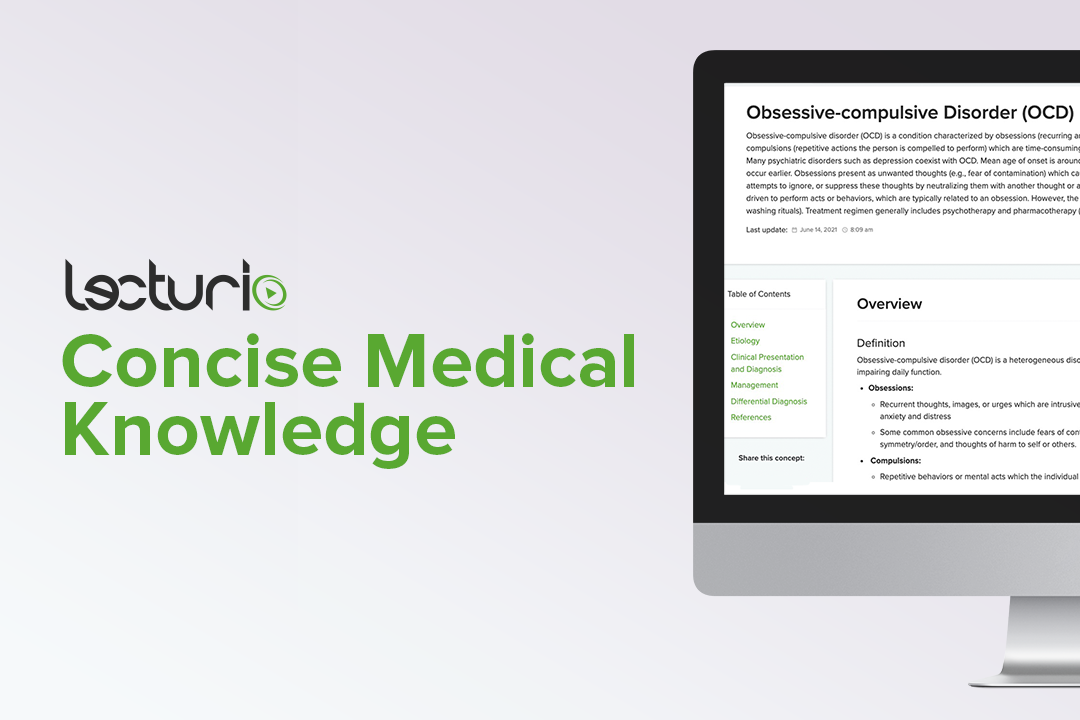 Obsessive-compulsive Disorder (OCD)
Obsessive-compulsive disorder (OCD) is a condition characterized by obsessions (recurring and intrusive thoughts, urges, or images) and/or compulsions (repetitive actions the person is compelled to perform) that are time-consuming and associated with functional impairment. Many psychiatric disorders such as depression coexist with OCD. The mean age of onset is about 20 years of age, although the condition can occur earlier. Obsessions present as unwanted thoughts (e.g., fear of contamination) that cause distress and anxiety. The suffering individual attempts to ignore or suppress these thoughts by neutralizing them with another thought or action, which is a compulsion. The individual is driven to perform certain acts or behaviors, which are typically related to an obsession. However, the compulsions are unrealistic or excessive (e.g., washing rituals). The treatment regimen generally includes psychotherapy and pharmacotherapy (with selective serotonin reuptake inhibitors (SSRIs)).
read more
Load more
Share
Ask Questions
Take Notes
Download Slides
Report Mistake
Comments
show all Show less
My Notes
show all Show less
Learning Material 2
show all Show less
Report mistake
Transcript
0 of 0

00:01 We’re now going to talk about the anxiety disorder known as obsessive compulsive disorder. 00:09 Let’s start with a case example. 00:11 Jane is a 30-year-old woman who fears contracting a disease. 00:16 She scrubs her hands in order to stay clean about a dozen times a day. 00:21 There’s chaffing on her hands and they sometimes bleed from excessive rubbing and scrubbing. 00:27 Jane has intrusive thoughts about becoming contaminated with an incurable illness. 00:33 To counter these thoughts, she counts down from 10 and switches on and off light switches in her home. 00:40 Jane is very distressed by her thoughts and she rarely leaves home because of them. 00:45 Fortunately, her job lets her work from home, but there are weeks where she won’t interface with other people and in fact doesn’t go outside at all. 00:54 Let’s define obsessions. 00:56 They are recurrent, intrusive thoughts or images that typically cause anxiety or distress. 01:07 And how about compulsions? They are defined as repetitive mental or behavioral acts that the individual feels driven to perform often in an effort to neutralize the obsessive thoughts. 01:21 So when we consider the case of Jane, what signs of obsessions or compulsions did you see in her from the case example? You probably saw a few things. 01:33 So she has obsessional thoughts, fears of contracting disease, compulsions like scrubbing here hands, counting and switching on and off lights. 01:42 The lifetime prevalence of OCD is 2-3% in the general population. 01:48 Females are affected more than males. 01:52 Note that more males are affected with OCD, however, in childhood than women. 01:58 In fact, males will specifically have an onset of age before 10 years old when they acquire OCD. 02:06 The main age of onset, however, for most people with the disorder including women are the mid-20s. 02:13 And 25% of cases will occur before 14 years old. 02:19 There’s a strong link between suicidal thoughts and behaviors and OCD, very important to note because in the psychiatry exam and in clinical practice, you want to pay close attention to suicide risk all the time. 02:34 There’s also a strong link between mental illness with in close relative especially those diagnosed with OCD. 02:42 So let’s think of this example a little bit more. 02:45 Let’s say you’ve actually started treating Jane and you’ve come to learn that she often she restricts here food intake to 10 bites at meals in an effort to stop her intrusive thoughts about having a disease. 03:00 She often feels fatigued without energy and has trouble getting out of bed and she reports to you that she has a very low mood. 03:08 What other psychiatric disorders is Jane at risk for having as a comorbidity to OCD? Well, here’s some of the differential diagnoses for OCD. 03:23 Personality disorders, obsessive compulsive personality, anxiety disorders. 03:30 This could include panic, social anxiety, generalized anxiety disorder and specific phobias. 03:37 Schizophrenia, mood disorders including depression and bipolar disorder, also somatoform disorders. 03:46 Things like body dysmorphic disorder, eating disorders and impulsivity disorders, which include tic disorder, Tourette’s, trichotillomania, and excoriation. 03:58 Note that OCD increases the likelihood of other mental illnesses in general. 04:04 Up to 29% of individuals seeking treatment have been found to have a history of a tic disorder. 04:12 So what are the different factors that lead to OCD? Let’s go through them one by one. 04:17 There are genetics. 04:19 So is there a correlation between genetic factors and OCD? Absolutely. 04:24 We tend to think there’s both familial and sporadic types of a link. 04:30 Twin and family studies show a correlation to a genetic contribution. 04:36 And how about the environment? What bacteria affects the development of OCD? The answer is group A streptococcus. 04:45 And what parts of a woman’s cycle affects the development of OCD? The premenstrual and postpartum periods. 04:56 Does trauma affect the development of OCD? It does. 05:01 Actually, exposure to traumatic events or stress can exacerbate OCD or lead to its manifestation. 05:10 And which medical trauma affects the development of OCD? Well, that would be neurological lesions, things like an ischemic stroke or traumatic brain injury. 05:22 Neurobiological factors are also important. 05:26 Do you know which circuit in the brain is linked to the neuroanatomical abnormalities seen in OCD? Well, structural imaging shows a link to neuroanatomical abnormalities in the cortico-striato-thalamo-cortical circuits, the CSTC circuits. 05:47 PET Scanning and functional MRIs have found abnormal activity in different nodes of the CSTC circuits. 05:57 Here’s a question for you, do individuals experience obsessions as voluntary and pleasurable? The answer is no, they do not. 06:07 In fact, it’s extremely distressing to a patient with OCD and it really interferes with their day to day functioning.

The lecture Obsessive Compulsive Disorder (OCD) by Helen Farrell, MD is from the course Anxiety and Stress-Related Disorders.

How can obsessions be defined?

Which of the following statements about obsessive-compulsive disorder (OCD) is FALSE?

Which of the following is NOT a factor for developing obsessive-compulsive disorder (OCD)?

Which circuit in the brain is involved in obsessive-compulsive disorder (OCD)?

Which of the following options is strongly linked to obsessive-compulsive disorder (OCD)?

the topic is very well structured I must say. Great lecturer!

the topic is very well structured I must say. Great lecturer!