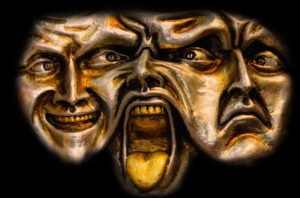 00:01 Let's now consider the neurotic defenses. 00:04 I'm gonna go through a few of them using case examples. 00:07 Let's start here with a nervous father. So consider a father who is flying his daughter home from the college for the first time. He's nervous about her flying alone and therefore he books airfare and ground transportation months in advance. 00:23 He sends her care package of food for the flight and he calls the airline to make sure that she boarded safely. He also checks the weather constantly on the day of her flight and the flight status updates every few minutes or so. 00:38 What kind of defense do you think he's displaying? Absolutely, controlling. 00:45 This is defined as regulating situations and events of external environment in an effort to relieve one's own anxiety. Here's another example, a man who is angry at his wife talks back to his boss at work. 01:01 He then refuses to complete work-related tasks that day and takes an extra hour for lunch. What do you think is going on with him in terms of his defense mechanism? Absolutely, displacement. How would you define displacement? Well, it's the shifting of emotions from an undesirable situation to one that is personally tolerable. Here's another example, a physician dying from colon cancer describes the pathophysiology of his disease in great detail to his 12-year-old son. Well, what kind of defense do you think this is? It's intellectualization. In other words, this man is avoiding negative feelings by the excessive use of intellectual functions and by focusing on irrelevant details or inanimate objects in order to explain a point. Consider this case example, a woman is raped and recounts the details to police without showing any emotion at all. 02:10 What defense mechanism did she employ to postpone dealing with those emotions? Isolation of affect. So what is that exactly? Well, it's unconsciously limiting the experience of feelings or emotions associated with the stressful life event in order to avoid dealing with the anxiety. Very commonly seen in trauma victims or in people who have been through some major accident or misfortune. 02:42 Here's another case, a man says, "I was passed over for a promotion because the boss owed a favor to his son's friend, even though I was the most qualified." What do you think his defenses? Rationalization. And how would you define that? It's the creating explanations of an event in order to justify outcomes or behaviors and to make them acceptable to oneself. How about this one. 03:13 A man who is in love with his coworker, insults her. 03:17 What do you think is going on here with his defense? Absolutely, reaction formation, and this is doing the opposite of an unacceptable impulse. 03:28 And here's another case. A woman we called the optimist, so this woman who is a self-proclaimed optimist continues to repeat mistakes from her past over and over again. What's going on with her? Well, she's displaying a defense mechanism called repression. 03:48 In other words repression is preventing a thought or feeling from entering ones consciousness. When people repress things from their past no matter how optimistic or hopeful they are, they're very likely to keep repeating the same mistakes or useless patterns of behavior. 04:07 One important key thing to keep in mind, is that repression is a very unconscious process, whereas suppression is a conscious process that people use in order cope in the moment. 04:22 We now talked a little bit about neurotic defenses. Unlike mature defenses, neurotic defenses can get in our way. All defense mechanisms are unconscious processes and we all use them. 04:36 Neurotic defenses, when they're use often, they can actually create a lot of tension in our lives and often manifest themselves as anxieties, sometimes as dysphoria and other kinds of mental health problems.

The lecture Neurotic Defenses by Helen Farrell, MD is from the course Personality Disorders.

Which of the following statements best defines the mechanism of displacement?

Which of the following terms defines the "avoidance of negative feelings by excessive use of intellectual functions and by focusing on irrelevant details or inanimate objects"?

A young man met with a major road traffic accident and recounts the details to the police without any emotion. Which defense mechanism is he using?

A movie star addicted to drugs starts a new campaign: "Say No to Drugs." What defense mechanism is he displaying?

Which of the following sentences regarding defense mechanisms is FALSE?