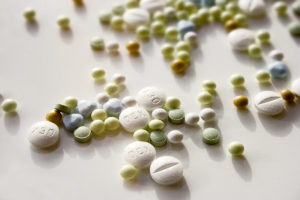 Gastrointestinal Pharmacology: Antiemetics
Antiemetics are used to prevent or stop vomiting; they act on the esophagus, stomach, intestines and even on the central nervous system where the vomiting center is located. In this article, we will cover in detail the various antiemetics, their mechanism of action, adverse effects/toxicity, contraindications, drug interactions and drugs of choice. Other important pharmacological and therapeutic aspects of individual drugs will also be noted.
read more
Load more
Share
Ask Questions
Take Notes
Download Slides
Report Mistake
Comments
show all Show less
My Notes
show all Show less
Learning Material 2
show all Show less
Report mistake
Transcript
0 of 0

00:01 Let's move on to the treatment of nausea or the anti-emetics. It's actually a huge category of drugs. 00:08 We have the serotonin 3 blockers like ondansetron. We have the dopamine 2 blockers. We have the histamine 1 blockers. 00:20 We have the antimuscarinics, the corticosteroids, cannabinoids which is a relatively new category, and the neurokinin receptor antagonists. 00:31 Let's move on to the histamine antagonists. Now, we discussed some of these histamine antagonists already in our psychiatry lectures. 00:38 H1 blockers include drugs like diphenhydramine which is also called Benadryl. 00:44 Now, some of the phenothiazines that are used in psychosis are also actually quite good anti-emetics. 00:51 And I'd encourage you to go back to those lectures and have another look at that just to understand how they're working in the brain. 00:58 Now, these agents are also used in allergy, cough and cold, flu medications, so they are very commonly used, they are very very good at their activity, and they are actually sold over the counter. 01:09 Interestingly enough, they are now being used as a recreational drug particularly by people who are of lesser means, and it's worrisome change in the way that we sell medications over the counter. 01:26 Scopolamine is a well known anti-emetic. It's used as the primary anti-emetic in probably most of the countries in the world, except the United States. 01:35 It's used in preoperative analgesia, in sea sickness, in motion sickness, ocular irritation, and irritable bowel syndrome. 01:42 So it's one of these drugs that's on the 100 most effective or most useful drugs in healthcare system put out by the United Nations World Health Organizations. It's available as a pill, as a patch, as an eye drop and also intravenously. 01:58 So, you've probably heard about scopolamine patches. They are very commonly sold before you get on your first deep sea fishing expedition. 02:07 Let's move on to the serotonin antagonists like ondansetron. Now, this is a very very effective group of anti-emetic drugs. 02:15 And in fact, we often use it in cancer chemotherapy. We also use it in general anesthesia so a lot of people will get quite nauseous with general anesthesia particularly in their recovery phase. 02:29 And ondansetron works quite well. Remember that this is an anti serotonin 3 receptor agent. 02:36 And like I said, it's very very effective. 02:39 Corticosteroids are sometimes used with emesis. Now dexamethasone is a very commonly used agent in our cancer chemotherapy. 02:48 It's a corticosteroid so it reduces swelling which is an important component. 02:53 But the nice thing about dexamethasone is that it also has huge anti-emetic effects in cancer chemotherapy regimens. 03:01 It's generally thought of as a very strong corticosteroid, a very good anti-emetic. It's only available in intravenous form. 03:13 Let's move on to the new class of drugs called the cannabinoids. Now, the cannabinoids clearly derived from marijuanna. 03:19 These are the agents that are currently available in the United States, Canada and the UK as cannabinoid agents. 03:26 They are oral medications and they are actually fairly effective. They are associated with an increase in appetite which is unlike every other single class of anti-emetic medications. 03:39 We use it in cancer chemotherapy now and it's quite effective. And the nice thing about this agent is that because the patients actually have an increase in appetite, we don't see that huge weight loss that we sometimes see with other anti-emetic and chemotherapeutic regimens. 03:55 Now, with respect to comparing it to marijuanna, these agents objectively are far more effective than marijuanna. 04:02 And that's actually makes sense because if you think about the way that we develop drugs, 90 % of drugs come from plants. 04:09 And the drugs are so much more effective than the plant based remedies that they are coming from In marijuanna's case, there's a huge political lobby pushing its use. Most marijuanna users want to smoke marijuanna rather than take the pills because somehow they think it's more, I would say natural. They are not as effective clearly and the problem is is that the patients end up smoking so much marijuanna that they become quite stupors and you know, I think the side effects are probably worse than the actual treatment. 04:48 The new class of agents called the neurokinin inhibitors are quite interesting. 04:53 They inhibit this newly discovered NK1 receptor which is also found in the area postrema along with the serotonin agents. 05:01 They are activated by a substance called substance P and there are other tachykinins which are newly discovered as well that are activating the same receptor. They're actually quite powerful and they're used in combination with other anti-emetics in chemotherapy that is highly emetogenic or really nausea producing. 05:21 They are also used in refractory hyperemesis. So patients who are not responding to other agents, we use these agents and wow, they works quite well. 05:31 This is the new generation of anti-emetic therapy. You should know it. 05:36 And just because it doesn't show up on old exams, doesn't mean it won't be on new exams. 05:41 And so I guarantee you it will be on the new exams.

What is the mechanism of action for diphenhydramine?

Which of the following correctly matches medications to their mechanisms of action?

What is unique about the side effect profile of cannabinoids?

Where in the body does the medication aprepitant target?