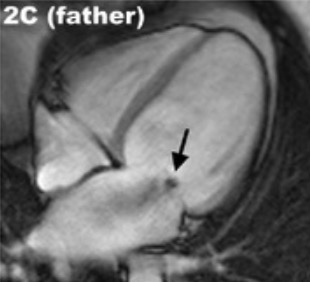 00:01 So, now, broad strokes about dilated cardiomyopathy and what it looks like in terms of the morphology. 00:08 The heart is overall flabby, it's dilated. 00:12 The heart weight is increased, there are no more cardiac myocytes there than a normal heart, but the increase in weight up to two to three times means that the individual myocytes are undergoing hypertrophy. 00:23 Again, this is adaptational response on the part of the myocardium, trying desperately to maintain normal cardiac output. 00:31 So it's just it says, 'We're not getting enough blood supplied'. 00:34 The signaling says, 'Okay, we need to make bigger cardiac myocytes with more sarcomeres so that we can squeeze more effectively', except that there is a primary defect in the squeeze. 00:45 And so all that increase in hypertrophy really doesn't help matters very much. 00:52 We get dilation of all the chambers. 00:54 The ventricular thickness, again, based on that hypertrophy and how much kind of dilational wall ventricular thickness can be less than normal, equal to normal or greater than normal. 01:06 But in general, these will be larger, just floppy, flabby hearts, Because the chambers are dilated, and they're sluggish flow because we're not getting vigorous contraction, ejection fractions on the order of 20 to 30% versus a normal 60 to 70%. 01:24 We will have abnormal flow, and the development of mural thrombi often present with shown here in the left ventricle, but also within the atrium. 01:32 And those can be sources of embolization. 01:36 Grossly, this is what it looks like. 01:37 We're just seeing dilation of the right ventricle, we're seeing dilation of the left ventricle. 01:43 And we are seeing some degree of interstitial fibrosis. 01:47 That interstitial fibrosis can be progressive. 01:51 And so this is just showing you normal myocardium stained with a trichrome stain Normal's on the left hand side, the next one has got a mild amount of interstitial fibrosis, so a little bit more blue. 02:03 And then over time, you can get more and more and more of this interstitial fibrosis. 02:10 This last one is a very low power shot, big areas of interstitial fibrosis. 02:16 And this is due to volume overload, stretching the fibroblasts within the heart, and now there's increased deposition of extracellular matrix. 02:26 So this is part and parcel of the dilated cardiomyopathy microscopic appearance. 02:32 How do patients present? It tends to be slow motion, you don't usually have overnight dilated cardiomyopathy. 02:39 It's usually over the course of months to years. 02:44 Exceptions include peripartum cardiomyopathy. 02:47 But it's usually signs of slowly progressive heart failure, which includes exertional dyspnea, and overall fatigue. 02:53 You're just not perfusing the body well enough. 02:56 You may have palpitations. 02:57 Again, the heart is dilated. 02:59 The normal conduction cell to cell to cell is not normal, so you will have arrhythmias potentially, because you have right sided heart failure as well as left sided heart failure, You're going to have edema and ascites. 03:11 One of the signs of slowly progressive congestive heart failure as you're well aware I'm sure is orthopnea so you have peripheral edema, and then when you lie supine, you get redistribution of that edema from the dependent areas in the legs up into the lungs, and you end up with more fluid accumulating in the lungs as you lie flat. 03:33 That's orthopnea. 03:34 The other entity is paroxysmal nocturnal dyspnea. 03:37 So the patient may initially be able to lie relatively flat or on one or two pillows at night. 03:43 But as over the course of the evening or at night, as the fluid redistributes from the lower extremities, because they're lying supine, they get more and more progressive accumulation of fluid in the lungs and they will wake up profoundly short of breath. 03:59 The patient will tell you, 'Doc, I had to run to a window and throw it open and lean forward, I could barely breathe'. 04:06 That's paroxysmal nocturnal dyspnea and it's due to redistribution of right sided edema. 04:14 You can have arrhythmias as as we already talked about, and this is just showing you an atrial fibrillation pattern. 04:22 You can develop the intracardiac neural thrombi. 04:25 You can have as the chamber dilates, you're going to tug on the papillary muscles, tug on the chordae tendineae, tug on the valve to get a secondary mitral valve insufficiency.

The lecture Morphology, Clinical Manifestations and Complications – Dilated Cardiomyopathy by Richard Mitchell, MD is from the course Cardiomyopathy.

What morphological finding is seen with dilated cardiomyopathy?

What is a common clinical manifestation of dilated cardiomyopathy?