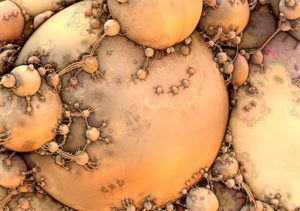 00:02 Now sugars are sometimes modified and they're modified chemically for various purposes in the cell, to make glycoproteins, to make various polymers as we shall see. Some of the examples of those modified sugars are seen on the screen here. They include galactosamine. Now, galactosamine as its name suggests, is derived from the sugar galactose. In this case, carbon number two's hydroxide has been replaced by an amine group. N-acetyl-glucosamine we see a related sugar, this being a sugar of glucose, in which the amine group replaced the hydroxide on position number two of glucose, but in addition an acetyl group was attached to it. N-acetyl-glucosamine turns out to be a very important sugar for making polymers of things like chitin. 00:50 Another modified sugar is mannose-6-phosphate. We will see as we talk about metabolism that putting phosphate groups onto sugars is a very common modification that happens to them. 01:01 In the case of mannose-6-phosphate, this molecule is used to target where a glycoprotein is going to be placed in a cell, it's like a license plate. On the lower left we see fructose-1,6-bisphosphate, here's a molecule that has had a phosphate put on carbon number one on the right and carbon number six on the left. This molecule is commonly found in the metabolic pathway known as glycolysis or the breakdown of glucose. The molecule on the lower right is glucuronic acid. Glucuronic acid is derived from glucose. It has the same structure except for that of carbon number six. Carbon number six has been oxidized from a CH2OH alcohol to form a carboxyl group. In this case the carboxyl group has had its proton removed, resulting in a negative charge as you can see. Glucuronic acid can ionize at physiological pH and that's something that glucose can't do. 01:55 Well in this introductory lecture, we've seen that carbohydrates can have a variety of structures and accompanying those structures we use a lot of nomenclature to describe them. I hope the lecture I've given here to you has been helpful to you in your understanding of these nomenclature and structure components of carbohydrate metabolism.

The lecture Modified Sugars – Simple Carbohydrates by Kevin Ahern, PhD is from the course Biochemistry: Basics.

Which of the following modified sugars is not correctly associated with its function?