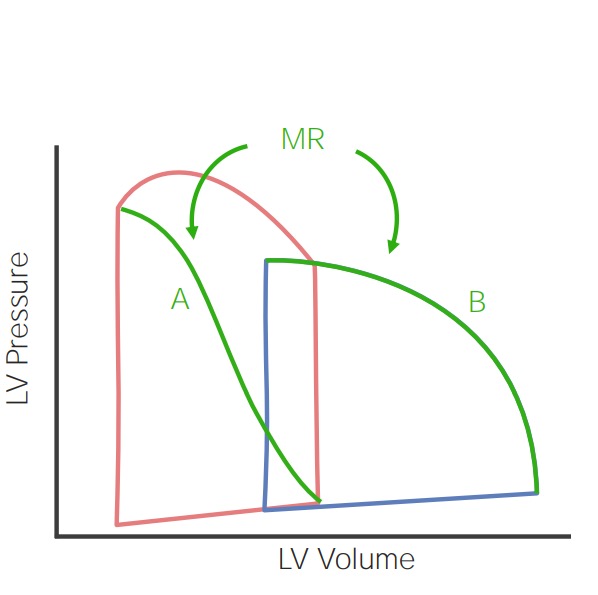 00:00 We're gonna compare the left ventricular pressure curve to that of the atrial tracing, and when we do, this is what we have. 00:07 Let's do the same thing over and over again. You like it now? I hope so. 00:12 So what you find is the following, on the left is once again, your left ventricular pressure curve and what are you gonna compare this to? Not the aortic pressure, this is the atrial tracing. 00:22 In the atrial tracing, A wave, quickly tell me what happens? It's the P wave. 00:28 SA node followed by mechanical contraction, that's my A wave. 00:34 What part of my cardiac cycle am I in? Late diastole? Late diastole, not systole, be careful. 00:42 Next, a form of C wave, but the C wave is only 50% of the time, technically speaking, bulging of the cusps. 00:50 Use the C to help you enter the atria, let it go. 00:54 Now, we have our issue. 00:56 As the blood, remember, mitral regurge, thinking ahead what's happening here, what kind of flow from the left ventricle. Bidirectional. Bidirectional. 01:03 The one over here to the aorta, one over here to the left atrium. 01:07 During systole what should be happening? During systole it's the fact that the left atrium is being filled up by pulmonary veins in addition now but it's also coming now from the left ventricle. 01:19 Acutely, what did we say happen? Acutely, the left atrium is not accustomed to that type of volume so what about the pressure? Ridiculously high. Would you tell me normally, close your eyes, you tell me normally what does that V wave represent? The V represents during systole, the fullest that the left atrium or right atrium, in this case the left, is going to then be filled up with blood, right? That's what it is normally. We said now, but it's also coming from left ventricle and acutely, that pressure is going to be acutely high; hence the huge V wave that you're seeing on the solid red line on the left graph. 02:00 Over a period of time, what would the left atrium do? It'll learn to adapt to that high volume, thus what happens to its pressure? It's going to come back to normal but what's the size of my left atrium? Increased. 02:12 So which one's chronic? The dash line that you're seeing, the red line, the dash red line on your left curve. 02:19 Now in terms of your murmur, there's this one, what does that represent? It represents closure. Is that where my problem is, in MR? Yes, it doesn't want to close. 02:30 It begins right after S1, it passes through S1, lu-lup, shh, du-dup, lu-lup, shh, du-dup. 02:39 My murmur, shh, shh, shh, is holosystolic, all through S1 and S2. 02:47 What was the other systolic murmur that you and we have seen together? Aortic stenosis. It was a diamond in the middle, a crescendo decrescendo that was aortic stenosis. 02:57 Let's take a look at our pressure volume loop. What's the most important point here? Well, I want you to take a look at number one, the loops. Now, what chamber is the loop? The pressure volume loop is only left ventricle. 03:10 And what's the X axis means to you? It is the volume, so now you have all this blood in your left atrium during diastole it's filling up the left ventricle, what's the size of my left ventricle? Huge, the opposite of mitral stenosis. Stay with me. 03:25 Now, since the size of the left ventricle has enlarged, which way is that loop going to move? To the right. You see that? That entire blue loop that you're seeing is to the right. Dr. Raj, that is the weirdest looking loop that I've seen in my entire physiologic life; and you're absolutely right cuz the pathology is mitral regurgitation. 03:46 So where is my problem? My problem is you see, curve green B, there's my problem. 03:53 Normally, what should that be? You see that red line? That red line or our pressure volume loop is an isovolumetric contraction; it should be nice and vertical, man. 04:02 You've lost it, you've lost it because during mitral regurge, you've lost the ability to create a proper isovolumetric contraction. 04:10 During isovolumetric contraction, what is actually happening? Blood is leaving the left ventricle and going into the left atrium, is it not? Are you picturing this? And so therefore you're not able to form a proper, straight, vertical line; you form a deficiency of isovolumetric contraction. 04:27 You find that on your pressure volume loop without a doubt, your diagnosis mitral regurge. 04:32 All they have to show you on any of your exams, it is, you see where it says A on that right graph, that A represents the loss or deficiency of your isovolumetric contraction. 04:46 Welcome, ladies and gentleman to MR, mitral regurge.

Which of the following adaptations is characteristic of chronic mitral regurgitation?

Which of the following is NOT a common feature of mitral stenosis and regurgitation?