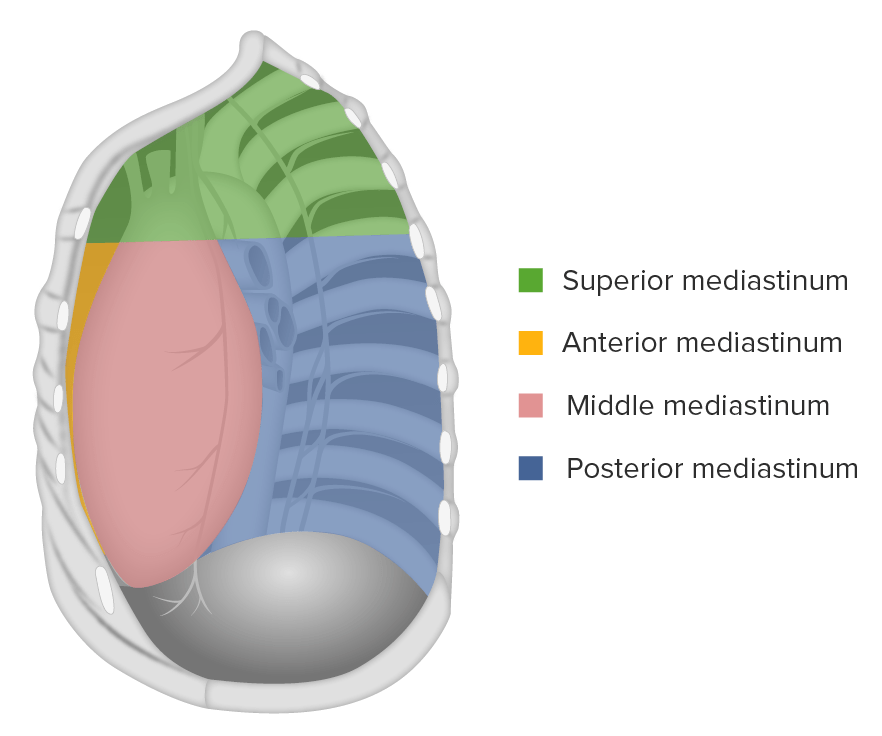 00:01 So let's talk about some abnormalities of the mediastinum that you might encounter. 00:05 The mediastinum is the space between the medial aspects of the lungs, the sternum anteriorly and the spine posteriorly. 00:13 So as essentially the central portion of the chest. 00:15 It's divided into three compartments: anterior, middle and posterior. 00:20 So this green area delineates the anterior mediastinum. 00:26 It's essentially the space between the sternum and the heart anteriorly. 00:30 There's a common differential diagnosis for masses in this region, it's the four T's so that makes a little bit easy to remember. 00:37 They're thyroid, teratoma, thymoma masses and terrible lymphoma just to make it easy to remember. 00:46 So this is an example of an anterior mediastinal mass, you can see that it obliterates the retrosternal airspace here, telling you that it's located in the anterior mediastinum. 00:57 So again thyroid masses are one of the more commonly seen anterior mediastinal masses that can result from a multinodular substernal goiter which then displaces the trachea away from the midline. 01:09 You can have thymic masses that cause an an anterior mediastinal mass and thymic masses include thymoma which is thymic epithelial neoplasm, that's often associated with myasthenia gravis. 01:21 You can have a normal thymic tissue which is seen most commonly in patients through their 20s and it's often seen as an incidental finding or you can also have thymic hyperplasia, possible a thymic cyst or a thymic carcinoma. 01:34 Lymphoma is the third type of anterior mediastinal mass and this is also relatively common most often this is a Hodgkin's lymphoma and it often presents as a lobulated mass. 01:46 Often it's seen with areas of lymphadenopathy and other parts of the body, other parts of the chest or possibly even the abdomen and lymphadenopathy is really defined by lymph nodes that measure greater than 1 cm, in short axis. So this is best seen on a CT scan. 02:03 The last is the teratomas. 02:05 This is a germinal tumor that contains all three germ layers with contains endoderm, mesoderm and ectoderm. 02:13 About 30% of these are actually malignant and they may contain areas of fat, cartilage and bone. 02:19 So this is how they're identified, often times they just present as a soft tissue mass in which case it may be hard to differentiate from the other masses but if it does contain any type of fat cartilage or bone then this helps you identify this is a teratoma. 02:32 Again, it's important to remember that these maybe difficult to differentiate on imaging, if you do see what appears to be a mass on a radiograph, the next step would be to perform a CT with contrast to take a better look. 02:44 Even then it may be difficult to differentiate and a biopsy is often needed. 02:48 So this is the middle mediastinum, essentially this contain the portion containing the hilum. 02:56 It's bordered by the anterior and posterior margins of the heart and the most common masses that are seen in this region are lymphadnopathy or abnormal lymph nodes. 03:07 These can be cause by lymphoma or metastatic cancer, TB, and sarcoid can both cause lymphadenopathy or they could just be reactive lymph nodes which are lymph nodes that are reacting to anything else that's going on the lungs. 03:19 So patient that has a significant pneumonia may have prominent lymph nodes because of the pneumonia and those should resolve once the pneumonia resolves. 03:26 This is the posterior mediastinum, so this is the compartment from the posterior margin of the heart all the way back to the vertebral column. 03:35 This usually contains tumors that's just neurogenic tumors, these can include Schwannomas or neurofibromas and if you take a look at this radiographs, you have a lobulated mass to the right side of the mediastinum here. 03:48 It's difficult to see where exactly this is just based on the frontal view. 03:51 However, on the lateral view you can tell that this is located posteriorly. 03:55 So we've gone over a multiple examples of findings that can be seen within the mediastinum. 04:01 Remember that the mediastinum is divided into anterior, middle and posterior and depending on where you localize the mass, you have a different differential diagnosis for each section.

The lecture Mediastinum in Radiology by Hetal Verma, MD is from the course Thoracic Radiology.

Which abnormality is commonly seen as a middle mediastinal mass?

Which of the following regarding anterior mediastinum is NOT correct?

Which abnormality can present as a posterior mediastinal mass?

Author of lecture Mediastinum in Radiology

because i like it.i like that the video is short at the same time so helpful and valuable .the explanation is so clear .

because i like it.i like that the video is short at the same time so helpful and valuable .the explanation is so clear .