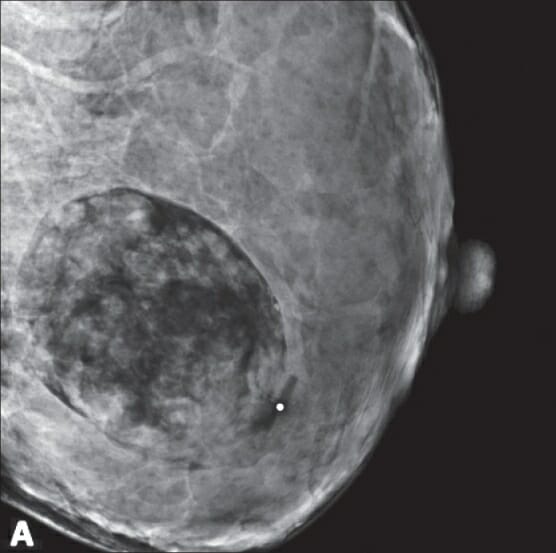 Breast Imaging
Female breasts, made of glandular, adipose, and connective tissue, are hormone-sensitive organs that undergo changes along with the menstrual cycle and during pregnancy. Breasts may be affected by various diseases, in which different imaging methods are important to arrive at the correct diagnosis and management. Mammography is used for breast cancer screening and diagnostic evaluation of various breast-related symptoms. Ultrasonography is rarely used for screening, but it is typically used for diagnostic workup and during procedures (e.g., breast biopsy). MRI of the breasts is used as a supplementary screening tool for those at high risk for developing breast cancer. Additionally, in individuals with breast implants, inconclusive mammographic and/or breast ultrasound findings, and diagnosed breast cancer needing evaluation pretreatment and posttreatment, MRI is an important breast radiologic tool.
read more 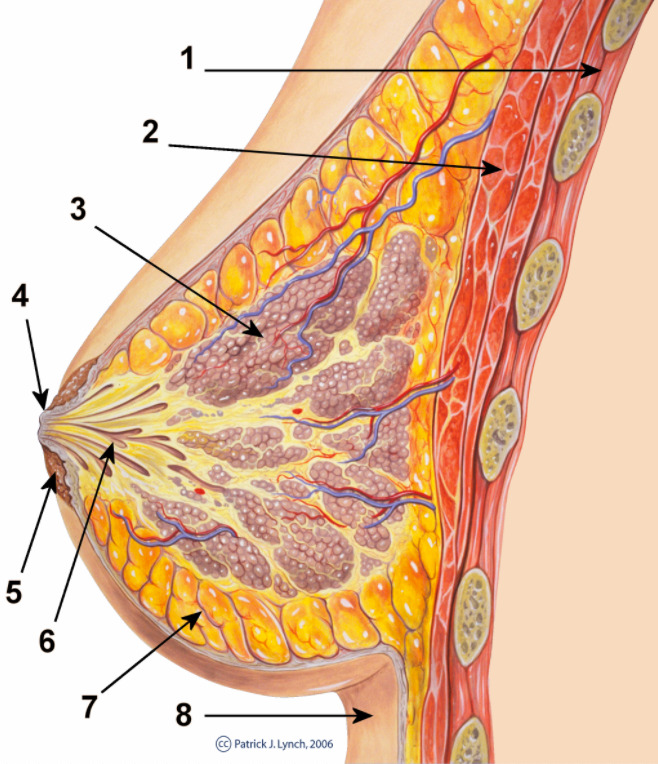 Breasts
The breasts are found on the anterior thoracic wall and consist of mammary glands surrounded by connective tissue. The mammary glands are modified apocrine sweat glands that produce milk, which serves as nutrition for infants. Breasts are rudimentary and usually nonfunctioning in men. The shape and size of the breasts change during a womanâ€™s life and menstrual cycles. Breasts are supplied by the axillary, internal thoracic, and intercostal arteries, and they are innervated by branches of the cervical plexus.
read more
Load more
Share
Ask Questions
Take Notes
Download Slides
Report Mistake
Comments
show all Show less
My Notes
show all Show less
Learning Material 2
show all Show less
Report mistake
Transcript
0 of 0

00:00 The mammary gland is a modified apocrine sweat gland. In fact, it really is a number of glands, individual apocrine sweat glands. You see two sections here of the non-lactating mammary gland. On the left hand picture, it’s taken at low magnification. And you can just make out some dense connective tissue, some adipose tissue, and then tiny little profiles of what are terminal ductals, small ducts that remain in a non-lactating breast. And these terminal ducts are shown at higher magnification on the right-hand side of the slide. These terminal ducts under the influence of prolactin, progesterones, and estrogens during pregnancy, are going to develop into the secretory units of the modified sweat gland, the apocrine sweat gland. 01:00 They are going to proliferate and form lobules, acini, secretory units. And then within those secretory units, there’s going to be an intralobular duct that then carries the secretion product towards the nipple where it joins the lactiferous duct. And then the milk is then secreted from that lactiferous duct. And just prior to the exit of the duct in the nipple, there is a little structure out-pocketing called the lactiferous sinus. On this section now low power, you start to see a number of lobules forming. These are individual modified apocrine sweat glands, each with their own duct system, each then opening in through the lactiferous ducts out into the nipple. And under high magnification on the right-hand side, you can see some details of each lobule. And all those secretory units evident there are really just growth of these terminal ducts that remain in a non-lactating breast that have gone through this growth and transformation into secretory units under the influence of various hormones. 02:21 So, in summary, I think it’s important to understand the importance of the uterine tube being both a transport organ for sperm and the oocyte, possibly to bring them together for fertilization. And also the epithelial cells provide nutrition to the environment for those oocytes and sperm and for the fertilized egg. Also, there is this muscular layer around the uterine tube that aids that transport besides the ciliated epithelial cells. 03:06 The endometrium undergoes drastic changes under the influence of estrogen and progesterone. 03:13 Estrogen repairs the lost functional layer of the endometrium after menstruation, and progesterone then stimulates the repaired glandular tissue to start secreting glycogen and other nutrients that are important for the possible implantation of a fertilized egg or a blastocyst. And these changes are all designed to optimize that possibility. 03:45 The cervix optimizes transport of the sperm because the secretory cells secrete a watery mucous at the time of ovulation, whereas, at other times the mucous is very thick and viscous and it is a retaliation for transport of any bacteria and pathogens, and even sperm. 04:06 And the vagina is a protective environment because of the acidity of the lumen produced by the action of bacteria on glycogen produced by the epithelial cells, and it has a wear and tear epithelium because it’s the female copulatory organ. And lastly, the mammary gland is a modified sweat gland. It undergoes dramatic changes during pregnancy, and also during lactation. So thank you for listening to this lecture. I hope you’ve now learned a lot about the organs of the female reproductive system. And I hope you now can appreciate how important it is that all these organs act together in unison under the influence of hormones they produce, but also hormones that are produced by the pituitary gland.

Which of the following is not a function of the uterine tube?

What is the function of progesterone following ovulation?

The mammary gland is histological similar to which of the following glands?