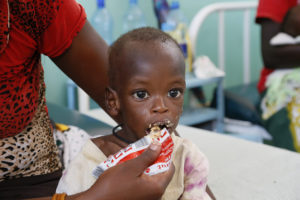 00:00 Before we step away from the topic of altered nutritional states, it's only fair that we consider malnutrition not because we see a lot of it in the United States. 00:12 But mainly because these two malnutrition conditions will appear over very likely appear on your exams. 00:21 First, let's look at kwashiorkor. 00:24 This condition has a very interesting origin for it's name. 00:30 In which the name comes for a second child or literally that child which follows the first. 00:38 And it's a name that came up in Ghana where this condition seems to happen fairly frequently across Africa in much poorer regions than the US for sure. 00:51 But it results from a protein deficiency. 00:54 And the point here is it has a very distinct presentation other than just serious malnutrition of all caloric intake. 01:04 So generally, we'll see kwashiorkor appear in slightly older children. 01:10 And the reason is based on the name. 01:14 As one child has been breast feeding and the mother becomes pregnant with another child. 01:20 And that child, the first child is weaned because the second child needs the nutrition. 01:26 Than that child that's weaned is going to go on less high protein diet. 01:31 Usually rice or higher carbohydrate diet. 01:35 So the symptoms of kwashiorkor result from not malnutrition but a protein deficiency which causes the edema and the classical sort of protruding belly. 01:48 Often with kwashiorkor you will see that there is some subcutaneous fat as oppose to marasmus, which is actual severe malnutrition. 01:59 Where we see sort of the skin and bones effect. 02:03 Usually marasmus or serious malnutrition will occur in very young children. 02:11 Of course it could occur anytime. 02:13 We've certainly seen older adults with malnutrition. 02:17 But the distinction here is purely because this type of malnutrition is very likely to appear on an exam. 02:25 Difference protruding belly versus the skin and bones look. 02:30 So in short I think we've covered all of the high yield kind of material that you need to know. 02:38 Highlighted the big pieces that you need to know for altered states of nutrition with aging and pregnancy. 02:45 And now you know the difference between marasmus and kwashiorkor. 02:50 I look forward to seeing you in another lecture.

The lecture Malnutrition by Georgina Cornwall, PhD is from the course Nutrition.

A young boy irritable boy comes to you with protuberant belly, thin hair and ulcerating dermatoses. On examination, he has pitting edema. Deficiency of which of the following substances has caused these changes to occur?

Which of the following sign and symptom is not present in kwashiorkor?

Short and interesting course. Binged it in one sitting. Ms. Cornwall is a pleasant lecturer.

Lectures on Nutrition
By ABRAHAM I. on 14. June 2017 for Malnutrition

Very informative and simplistic in delivery. I eagerly look forward to the questions from this subject during the exams.

Short and interesting course. Binged it in one sitting. Ms. Cornwall is a pleasant lecturer.

Lectures on Nutrition
By ABRAHAM I. on 14. June 2017 for Malnutrition

Very informative and simplistic in delivery. I eagerly look forward to the questions from this subject during the exams.