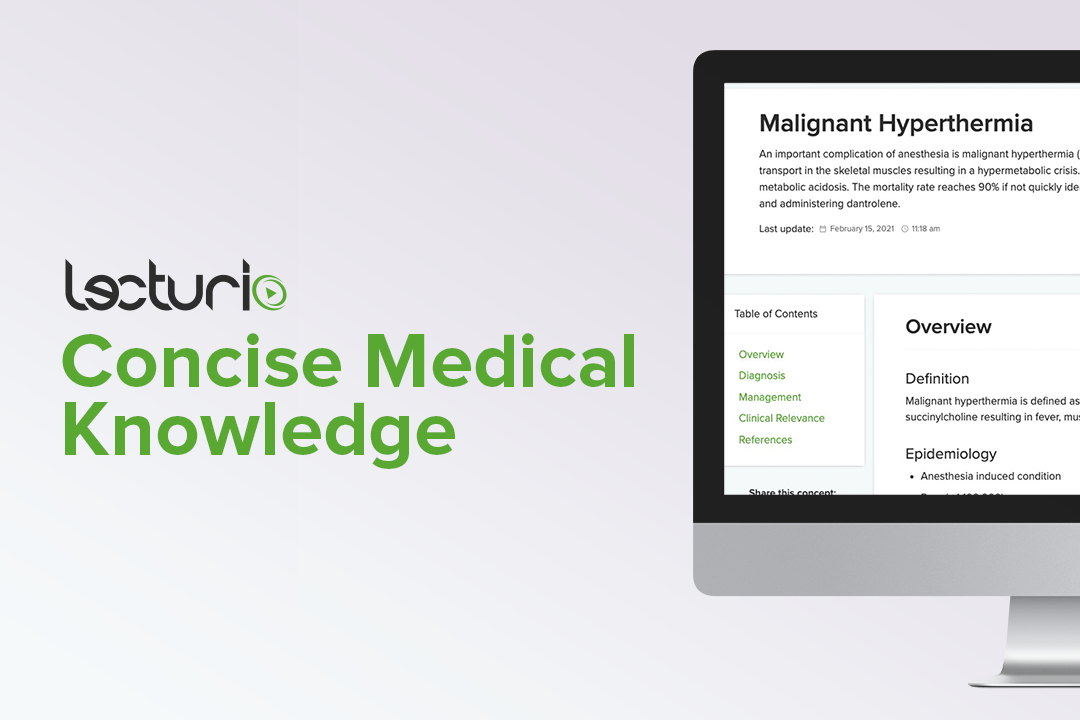 00:00 So we're going to start off talking about an extraordinary rare condition, but one that has a very high mortality if it's not diagnosed early. 00:08 And this is malignant hyperthermia. This is a genetic disorder that is transmitted in an autosomal dominant genetic fashion. But it's extremely rare. It occurs in less than 1:1,000,000 people. The problem is that, when it does occur, it's highly lethal. 00:26 Has an 80-90% mortality, unless it's rapidly diagnosed and aggressively treated. When it is treated appropriately, it has a 90% cure rate. 00:38 So the anesthesiologist who may go through a long career, such as I have done, and never see this disorder, must be able to diagnose it instantly if it does occur. 00:50 It's only seen either after a vapour is used on a patient, or Succinylcholine is used. 00:56 But it is probably the only truly anesthesia-induced condition. 01:05 The cause is an abnormal sarcoplasmic reticulum calcium channel, very complex. But the bottom line is that large amounts of calcium are released into the muscle. 01:14 Muscle's going into spasm. Muscle fibers are damaged and release myoglobin, which is the color in muscle, the material that gives muscle its orangish-reddish color. This can lead to severe metabolic acidosis, renal failure, cerebral edema, pulmonary edema, and rapid death if treatment is not initiated. Temperature is one of the signs of this disorder, but it's a late sign. And nearly everybody believes nowadays that temperature is actually not a very good indicator of this problem, and that we have to be aware of the problem and be able to diagnose it long before temperature becomes an issue. The early signs of malignant hyperthermia are very non-specific unfortunately. They include tachycardia, rapid heart rate without apparent cause, and a sudden increase in end-tidal carbon dioxide without apparent cause. 02:08 These signs in themselves may be enough to make the diagnosis of malignant hyperthermia. 02:14 The problem is that both of these things can occur in all kinds of other situations. 02:20 The good news is, if you start treatment and the patient doesn't have malignant hyperthermia, you really don't do any damage. So it's better to start treatment on the assumption that it may be malignant hyperthermia, further diagnose the situation, and if it turns out not to be malignant hyperthermia, you haven't done any damage. The only real drug of use in the treatment of malignant hyperthermia is a drug called Dantrolene Sodium. This has to be mixed and it's difficult to mix, and the usual starting dose is 2 mg/kg, which is about 7 amps. And it takes a team of people to mix the stuff, and you have to shake it for ages to actually get it into a state that will allow you to inject it. So you have to think about it early. You have to get a team of people working together really early on in this condition, to reverse it and save the patient. Start off with 2 mg/kg initially, then 1-2 mg/kg, every 3-5 minutes, until the patient improves or you've hit 10 mg/kg. If I ever see this condition, which I'm thankful I haven't yet, I'm going to carry on past 10 if I must, but hopefully, and the evidence from the literature would suggest, most people recover or start to show signs of recovery before you hit 10 mg/kg. You should also start active cooling of the patient. Ice packs to the outside of the body. Ice-cold solutions lavage through the bladder and into the peritoneal cavity. ICU care is essential for these patients because the condition can reactivate later on, so you can get the patient under control, everything appears to be great, but unfortunately, several hours later, it may re-occur. So you have to have the patient in a monitored environment, to make sure that you can treat them again if necessary. Very rare, but it must be diagnosed. This URL to the Malignant Hyperthermia Association of the US has the best information on malignant hyperthermia you can find anywhere. It's all there! So if you're interested in this disorder and you want to know more about it, go on to that web page, and all the information you'll ever need to know about MH is right there for you.

The lecture Malignant Hyperthermia – Drug Induced Emergencies by Brian Warriner, MD is from the course Emergencies.

What pharmacologic agent is used to treat malignant hyperthermia?

Which description applies to malignant hyperthermia?

The Lecturer has an excellent way of explaining the concept

The Lecturer has an excellent way of explaining the concept