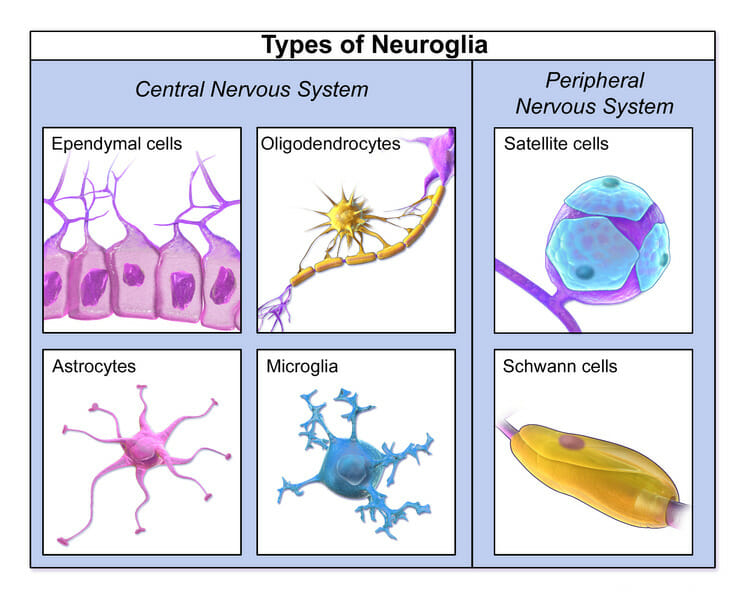 Histology of the Nervous System
Nerve tissue consists of 2 principal types of cells: neurons and supporting cells. The neuron is the structural and functional/electrically excitable unit of the nervous system that receives, processes, and transmits electrical signals to and from other parts of the nervous system via its cell processes. There are multiple types of neurons that are classified based on their anatomic structure and function as sensory neurons, motor neurons, and interneurons. The functional components of a neuron include dendrites (to receive signals), a cell body (to drive cellular activities), an axon (to conduct impulses to target cells), and synaptic junctions (specialized junctions between neurons that facilitate the transmission of impulses between neurons; they are also found between axons and effector/target cells, such as muscle and gland cells). Supporting cells are called neuroglial cells and are located close to the neurons; however, these cells do not conduct electrical signals. The CNS consists of 4 types of glial cells: oligodendrocytes, astrocytes, microglia, and ependymal cells, each having a different function. In the PNS, the supporting cells are called peripheral neuroglia and include Schwann cells, satellite cells, and various other cells having specific structures and functions. Schwann cells surround the processes of nerve cells and isolate them from adjacent cells and the extracellular matrix by producing a lipid-rich myelin sheath, ensuring the rapid conduction of nerve impulses. Satellite cells are similar to Schwann cells, but they surround the nerve cell bodies. In the CNS, oligodendrocytes produce and maintain the myelin sheath. A nerve is composed of a collection of bundles (or fascicles) of nerve fibers. Within the CNS, the brain and spinal cord tissue can be classified as gray or white matter, depending on the tissue composition. White matter is most notably composed of myelinated nerve fibers, whereas gray matter is made up of neuronal cell bodies.
read more
Load more
Share
Ask Questions
Take Notes
Download Slides
Report Mistake
Comments
show all Show less
My Notes
show all Show less
Learning Material 2
show all Show less
Report mistake
Transcript
0 of 0

00:01 So now that you know a little bit about the basic structural components of neurons, let us have a look and see now how we can further subdivide these neurons into three different types. 00:16 In the previous slide, we looked of course at the motor neuron. It was a somatic neuron that supplied skeletal muscles that brought about the contraction of skeletal muscle. 00:28 It is voluntary, we are aware of it. Now the other type of motor neuron is the visceral neuron that innervates smooth muscle as well as components of the heart that increase the rate of impulse travelling or impulse conduction by specialized cardiac muscles called Purkinje fibres that brings about an increase or maybe a decrease in the heartbeat. 00:59 And these visceral neurons can also innervate glands and increase secretion rate or decrease it, whatever the case maybe. Now I have also got the term efferent neuron. They are to describe both the somatic neurons and also the visceral neurons. Efferent means exiting, the brain and spinal cord. Think of e for efferent, e for exiting, and it is why I remember that all efferent neurons are motor neurons. The next type of neuron is the sensory neuron and again we have somatic components and visceral components. The somatic sensory neurons are from the periphery and they give us information about touch and temperature, pain and pressure and various other sensations that we are aware of. We also are sometimes aware of certain aches and sensations in internal organs or in mucous membranes and that sort of sensory information comes in through visceral efferent neurons. Visceral means from the internal parts of the body. Now I use the word afferent. Then an afferent neuron to describe a sensory neuron. Think of the word afferent, the letter "a". A for arriving, the impulses are arriving into the brain or spinal cord with sensory information. 02:44 Now besides having motor neurons and sensory neurons, there are interneurons. They are much smaller. 02:51 Sometimes they are called intercalated neurons or even integrative neurons. But their job is really just to communicate between those sensory and motor neurons and also between various other neurons that we find in the spinal cord in the brain. Say they create integrating networks, so that the information brought into the brain or spinal cord is then transferred to other neurons for processing by these particular interneurons. Now here is a diagram to actually describe what the structure of some of these neurons look like. And I just want you really to concentrate on the two diagrams on the right-hand side of this particular picture. The first one is the motor neuron. Notice it has got a dendritic tree or dendroid branch around the cell body or soma. Those dendrites remember, receive information from other interneurons, where the information is then processed by the cells. And then the impulse is fired and travelled down the long axon you see labelled there as well. Only one axon travelling down from the motor neuron. It's called a motor neuron or a multipolar neuron. Now on the next section, you see a sensory neuron, on the next diagram. Notice its cell body sits out on its own and it actually has two processes, two long axons extend one to the periphery and one into the central nervous system or the brain. That is because this is a sensory neuron and one part of the axon is bringing information in from the periphery and then the other part of the axon travels pass the cell body and brings information into the brain or spinal cord. 05:08 And we are going to see later on that cell body you can see of the sensory neuron is actually located outside the brain and spinal cord in a sensory ganglion. Remember, I mentioned at the very start of this lecture, that a ganglion is a collection of cell bodies outside the central nervous system. Well this is an example of where one of these sensory neuron cell bodies is located. It is often called a pseudounipolar or unipolar sensory neuron, because it has only got one little process, one little pole coming from the cell body whereas the motor one has a number of different processes coming such as all the dendrites and also the one long process, the axon. We will talk about the bipolar or retinal neurons when we look at the eye in a later lecture. 06:11 Well here is another diagram showing you some enormous communicating neurons that have enormous dendritic trees. Have a look at the pingy cell that we are going to see in the next lecture in the cerebellum. It has an enormous array of dendritic branches so to disappear a middle cell in the hippocampus and that is because these two neurons are getting an enormous amount of information to process before they then fire off their axons to control or at least influence some body functions, some activity via other nerves. Integrative neuron is another term used for these neurons that I've mentioned before. High massive branches of dendritic trees that perceive and receive information. So in summary just have a look at this little diagram and make sure more importantly for this lecture that you know structurally the difference between the motor neuron and the sensory neuron. Because what we are going to do now, we can't actually see where these cell bodies are located within the central nervous system and spinal cord and within the ganglia just outside the spinal cord.

The lecture Major Types of Neurons by Geoffrey Meyer, PhD is from the course Nerve Tissue.

Which of the following carries sensory information from an internal organ?

Which of the following connect two brain regions, but are not direct motor or sensory neurons?

Which of the following is a cluster of neuron cell bodies outside the central nervous system?

The neurons of the retina which carry light-elicited signals from photoreceptors in the outer retina to cells in the inner retina are primarily of which of the following type?

Which of the following types of neurons has two extensions, one axon and one dendrite, from the soma?

Dr. Meyer is a great teacher, a lot from my experience with his videos regarding the introduction to the mammalian cell however, this video definitely left a lot to be discerned and was not very informative. Required me to do a lot of googling to make sense of much of these... Hard to follow and disappointing.

Dr. Meyer is a great teacher, a lot from my experience with his videos regarding the introduction to the mammalian cell however, this video definitely left a lot to be discerned and was not very informative. Required me to do a lot of googling to make sense of much of these... Hard to follow and disappointing.