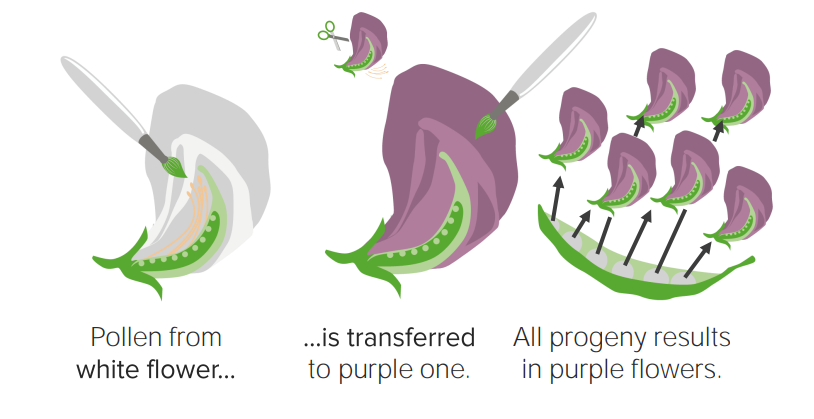 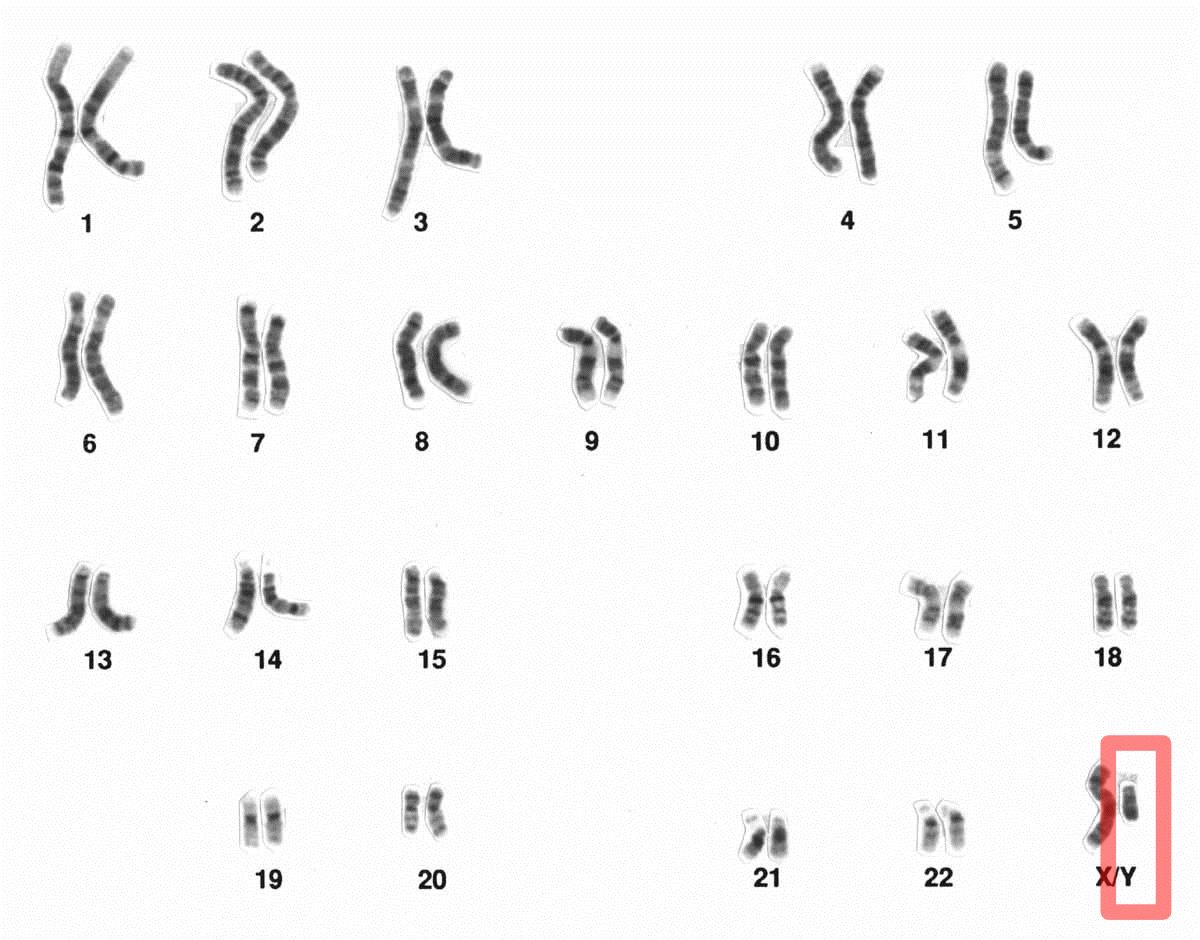 Sex Determination
There are 2 types of sex chromosomes in humans: X and Y. Chromosomal sex is male when a Y chromosome is present (e.g., 46,XY or 47,XXY) and female when the Y chromosome is absent (e.g., 46,XX or 45,X0). Male phenotypes develop when a specific gene, called the SRY gene (usually found on the Y chromosome), is present, stimulating differentiation of the gonads into testes. The testes then produce testosterone (triggering development of the penis and scrotum externally and the ejaculatory system internally) and antimüllerian hormone (AMH), which causes regression of the müllerian ducts. Without the SRY gene, ovaries develop; without testosterone, external female genitalia develop; and without AMH, the müllerian ducts persist and differentiate into the fallopian tubes, uterus, and upper vagina.
read more 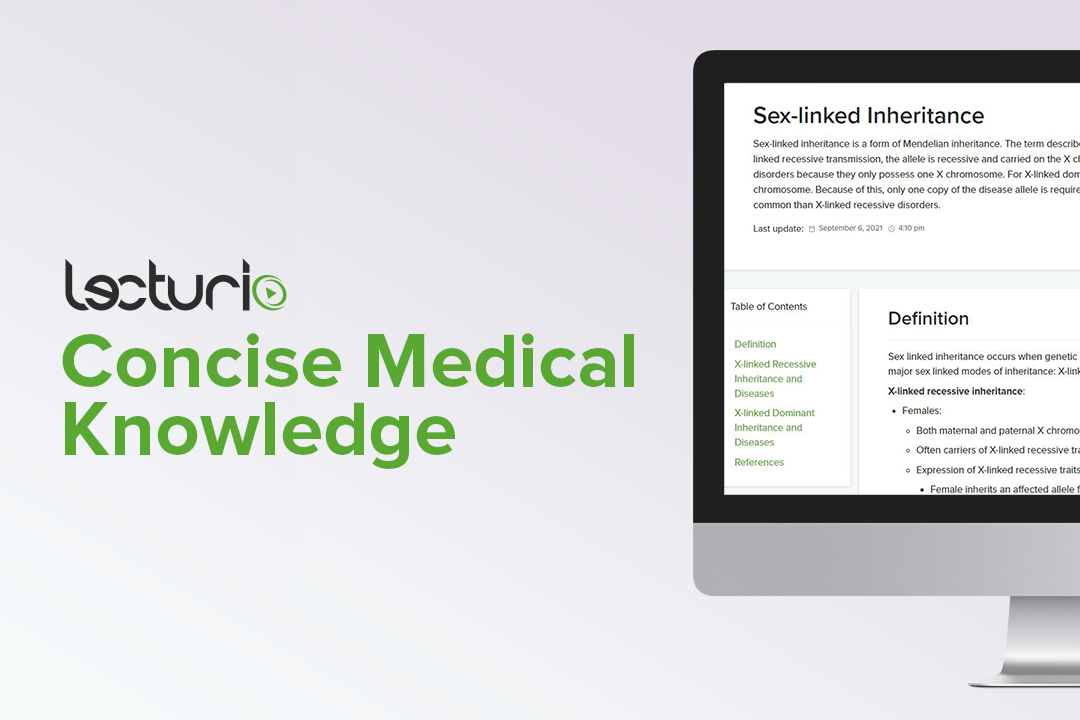 00:01 Previously we have been examining Mendel series of inheritance, but recall Mendel had no idea about chromosomes, genes or DNA and he termed these things factors. In this lecture, we will explore chromosome theory, how we understood the existence of chromosomes as well as sex linkage. By the end of the lecture, you should be able to explain the chromosomal theory of inheritance as well as describe the nature of sex linkage and discuss how chromosomes are linked to sex determination as well as evaluate the impact of X inactivation and explain exceptions to the chromosomal theory of inheritance. 00:44 Let us begin by taking a look at the chromosomal theory of inheritance. Basically, it says before we get into the background that chromosomes are the basis of all genetic inheritance. 00:58 Genes are located on chromosomes in short. How do we come to this explanation? Well it was about a hundred years beyond Mendel's description of factors, that Sutton and Boveri independently researched chromosomes and their movement during meiosis. They were looking at sea urchins and grasshoppers and they noticed that chromosomes were necessary for an embryo to grow. If they removed them, they didn't work and that you could actually observe those chromosomes pairing and shuffling on the metaphase plate. So there's evidence that in physical evidence of chromosomes segregating and independent assortment, each set of chromosomes assorting independently of other sex. So there is sufficient evidence linking Mendel's factors to chromosomes. 01:50 The next piece of the puzzle is to determine that this is really what is going on. It was a little bit sketchy in the beginning, people really didn't believe that that is what it happened and it took about ten years for the idea to sink in. And it was culminated with the findings of Thomas Hunt Morgan. Thomas Hunt Morgan was doing work with fruit flies. 02:14 You are probably familiar with the name at some level and what he noticed or what he was looking at was red eye color and he found some flies that had white eye color. And when he performed a cross between a white-eyed male and a red-eyed female, he found that the F1 progeny all had red eyes and that is great. We have seen simple dominance like that, but when he crossed the F1 progeny, he ended up with only males with white eyes and so Thomas Hunt Morgan thought it will perhaps then white eyes in females is a lethal condition. There were non viable, unable to reproduce and to answer this question, he performed the test cross. In the test cross, he took the F1 generation female, the heterozygote female and test crossed back to the recessive condition, the male with white eyes. Because the outcomes of the test cross revealed that the white-eyed females are actually viable, Thomas Hunt Morgan suggested that the trait must be associated with sex determination somehow and showed that possibly there is an X and Y chromosome involved in sex determination and confirmed this chromosomal theory of inheritance. 03:44 Let us take a little sec away for a moment to discuss the language of fruit fly genetics. Thomas Hunt Morgan and his students developed a different notation system than we see in Mendelian genetics. 03:57 It can be a little confusing to begin with, so we will take a moment to look at it. The notation is based on the common form versus the mutant form. The more common form is generally the dominant form and we call it wild type. Wild type is denoted by the lower case letter for the mutant types, so in this case, white eyes or, we give it a plus sign to denote that that is the nonmutant form or the wild type form. If we were to look at a reciprocal cross, we could cross the wild type with a mutant male and we would see a certain number of offspring that we'll look at and if we were to do the reciprocal cross on this, we would cross a mutant female with a wild-type male. You will notice that the males have a Y instead of the wild-type notation or the mutant notation because they don't have two X chromosomes just a Y. We will include that there. When we perform these crosses, we can see that the first reciprocal cross with the wild type female and the white-eyed male reveals only wild-type individuals, wild-type phenotype, they all have red eyes male and female. And looking back at the second reciprocal cross the other way round, we are taking a white female and crossing it with a wild type male. So white-eyed female, wild-type male, we will see that the progeny revealed there would be all wild-type female phenotype and mutant male phenotype. That is an introduction to the language of fruit fly genetics. We have wild-type and mutant. Generally wild type is dominant, but that is not always the case. 05:53 The plus sign is going to illustrate the dominance piece of the puzzle.

The lecture Linking Mendel and Chromosomes – Chromosome Theory and Sex Linkage by Georgina Cornwall, PhD is from the course Understanding Genetics.

What does the chromosomal theory of inheritance state?

Which of the following was Thomas Hunt Morgan able to demonstrate using fruit flies?

Which of the following is proposed by the Boveri-Sutton theory?