Letters of Recommendation and Feedback 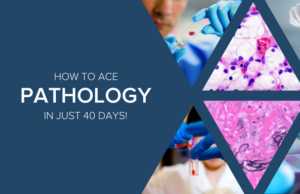 How to Really Ace Pathology – The 40-day Study Schedule
Pathology makes up about 70 % of your USMLE Step 1 prep: If you're like most students, you're probably struggling to find the right approach that works when it comes to getting started, gaining the required knowledge, and applying what you've learned so that you're really ready for test day! This article will guide you through the entire process of Pathology board exam preparation. It takes a very structured and integrated 3-step approach. You can be fully prepped in about 40 days if you study for an average of 6 hours per day – Start now!
read more

Medical School Survival Guide (FREE)
Congratulations on your decision to become a physician! The road from college to attending physician is a long and sometimes torturous one with road blocks and hurdles. This eBook is designed to guide you through the logistical and strategic portions of the process.
read more
Load more
Share
Ask Questions
Take Notes
Download Slides
Report Mistake
Comments
show all Show less
My Notes
show all Show less
Learning Material 2
show all Show less
Report mistake
Transcript
0 of 0

The lecture Letters of Recommendation and Feedback by Mohammad Hajighasemi-Ossareh, MD, MBA is from the course Med School Year 4. It contains the following chapters:

Author of lecture Letters of Recommendation and Feedback