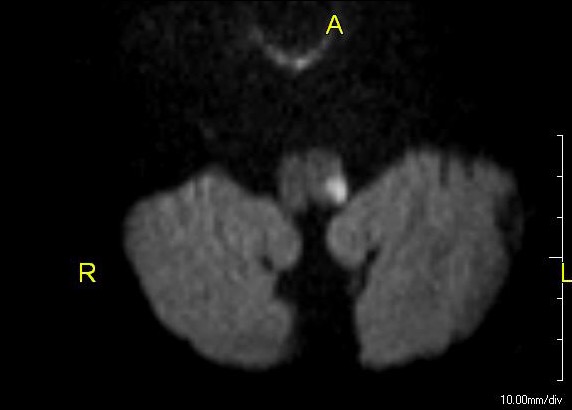 Lateral Medullary Syndrome (Wallenberg Syndrome)
Lateral medullary syndrome (also known as Wallenberg syndrome, posterior inferior cerebellar artery (PICA) syndrome, and vertebral artery syndrome) is a neurological constellation of symptoms and signs due to obstruction in vessels supplying the medulla, resulting in brainstem ischemia or infarction. The most common cause is atherosclerosis in the posterior cerebral circulation, and the most reported symptom is a transient ischemic attack (TIA) with dizziness or vertigo. With stroke/infarction, patients also present with nausea and vomiting, loss of balance with gait, instability, hoarseness, and difficulty in swallowing. The signs are dependent on the specific nuclei and fibers affected. Diagnosis is made by clinical exam and imaging with CT/MRI. Management is mostly supportive, including speech and occupational therapy after acute intervention, as well as risk factor reduction for future ischemic events.
read more
Load more
Share
Ask Questions
Take Notes
Download Slides
Report Mistake
Comments
show all Show less
My Notes
show all Show less
Learning Material 2
show all Show less
Report mistake
Transcript
0 of 0

00:01 This syndrome is the lateral medullary syndrome. This is Wallenberg syndrome. The view that we have here is the medulla at the level of the olive. This is the result of a vascular lesion that involves either the vertebral artery and/or the posterior inferior cerebellar artery which is known by its acronym, PICA. 00:31 This slide is showing the structures that are damaged in lateral medullary syndrome, Wallenberg syndrome. 00:43 Again, we’re at a specific level here but these lesions would extend above and below that. So, some of the structures that are listed here aren’t detected at this particular axial level that we’re viewing. One of the structures that would be involved in this syndrome would be the inferior cerebellar peduncle. That is shown right in through here. Vestibular nuclei are also lesioned in this syndrome. They are not visible, however, at this level of section. The spinal trigeminal nucleus, we do have a trigeminal component here. 01:21 This is the spinal tract of the trigeminal nerve, so this apparatus would be damaged. The nuclei ambiguus and solitarius would be damaged. Descending sympathetic fibers are found in this area of lesion and so they would be damaged. Then we would also have damage or lesion to the spinothalamic tract in this lateral medullary region. If we take a look at each of these involved structures and associated symptoms, here we’re looking at ipsilateral ataxia being associated with a lesion of the inferior cerebellar peduncle. 02:09 Vestibular nuclei lesions have various symptoms. Vertigo would be one of those symptoms. Nystagmus would be another symptom associated with injury to these nuclei. Double vison or diplopia would be another symptom of damage to the nuclei. The spinal trigeminal nucleus and apparatus is also lesioned. 02:47 This would cause a loss of pain and temperature from the ipsilateral face. Here we’re looking at a cranial nerve nucleus. Symptoms are going to be on the same side, ipsilateral. Also damaged are two nuclei, the nucleus ambiguus and the nucleus solitarius. Symptoms associated with lesions of these two nuclei would include hoarseness, difficulty swallowing - dysphagia, difficulty with speaking - dysphonia. 03:25 Individual would have an impaired gag reflex. There would be decreased taste or gustation. 03:38 This would involve damage to the solitarius nucleus. Again, since these are involved with cranial nerves, all of these symptoms are going to be on the ipsilateral side where it can be defined. Descending sympathetics are lesioned in the lateral medullary or Wallenberg syndrome. When you damage the sympathetics at this level, you’re going to produce ipsilateral findings that are related to Horner’s syndrome. 04:12 So miosis, anhidrosis, and ptosis would be the classic triad of Horner’s syndrome. The spinothalamic symptoms because of a lesion to this pathway would be contralateral. So, you’ll have a loss of pain and temperature from the contralateral body. This would be distal or inferior to the face.

The lecture Lateral Medullary Syndrome by Craig Canby, PhD is from the course Brain Stem.

Which of the following structures is NOT involved in Wallenberg syndrome?

Which of the following structures with a lesion would correspond to ipsilateral ataxia in Wallenberg syndrome?

Which of the following symptoms are caused by a lesion of the nucleus ambiguus and solitarius?