Development of the Urogenital System
The urogenital system is derived from intermediate mesoderm. The intermediate mesoderm differentiates into nephrogenic cords (which will go on to form the urinary system) and an adjacent area known as the gonadal ridge (which will go on to form the gonads). The nephrogenic cords elongate in a caudal direction and sequentially develop 3 different structures: the pronephros (rudimentary and nonfunctional), the mesonephros (forms the primitive urinary system), and the metanephros (forms the permanent kidney). Concurrently, the genital system develops in close association with the urinary system. Genital development depends on chromosomal sex, which determines whether the primitive gonads differentiate into testes or ovaries. The gonads then secrete certain hormones, which direct further development of both the internal and external genital structures.
read more 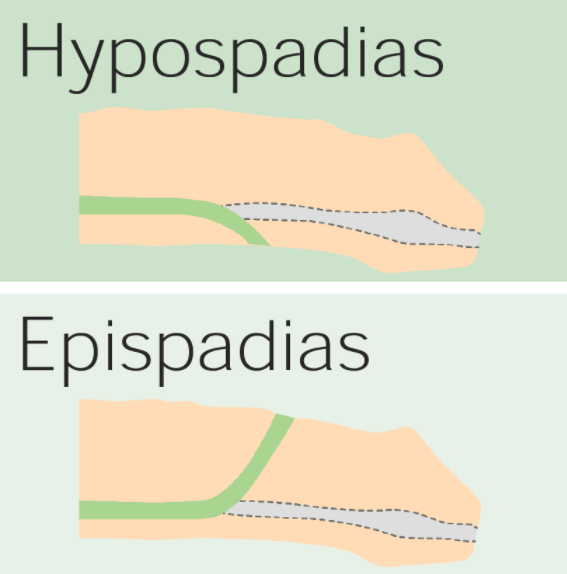 Penile Anomalies and Conditions
Penile anomalies and conditions may be congenital or acquired and can affect the urethral opening, prepuce, shaft, or glans or the penis. Examples include phimosis, paraphimosis, epispadias, hypospadias, balanitis, Peyronie disease, and priapism. The severity of clinical symptoms varies, but diagnosis of each of these conditions is usually based on the history and physical examination. Treatment varies from medical therapies to surgical intervention. These diagnoses are important to be aware of, since a few (such as phimosis and balanitis) are relatively common, while others (such as paraphimosis and priapism) can have severe complications if not treated in a timely fashion.
read more
Load more
Share
Ask Questions
Take Notes
Download Slides
Report Mistake
Comments
show all Show less
My Notes
show all Show less
Learning Material 2
show all Show less
Report mistake
Transcript
0 of 0

00:01 Here we’ll take a look at the male reproductive pathology. 00:03 And just like we have done in many organ systems, we shall also approach this in an organized fashion. 00:09 Let’s begin. 00:13 We’ll begin our discussion by looking at congenital male reproductive pathology and here, you’ll notice just a couple of topics in which which I’ve kind of integrated them so that you can get a good idea as to what you can expect in terms of development of the testis. 00:30 If you notice a picture on the left -- So this will be embryologically. 00:34 If you notice on the left that the fetus and the testis are located up in the abdomen. 00:40 And at some point in time, the gubernaculum, which you see in picture B here is going to literally pull the testis down into the scrotum. 00:50 And there’s a condition in which, if at any point in the testis do not properly descend into the scrotum, we have problems of undescended testis. 00:59 In other words, cryptorchidism. 01:01 We’ll talk about that in greater detail when we talk about testicular tumors. 01:06 Anytime there is cryptorchidism or there is improper descent of the testis into the scrotum, then you’re worried about cancer developing in your male, unfortunately. 01:17 Next, we have a little structure here called the processus vaginalis. 01:21 Just a quick little overview of anatomy here. 01:24 And on the bottom, you’ll notice numbers. 01:27 And number one, when we get to letter D here in the illustration, is what if you had openings either on the dorsum or the ventral aspect of the penis. 01:38 You call this either hypo- which means the bottom, but more importantly, make sure that you know the description of it. 01:45 So even though this is bottom of the penis, you then call this what? The? Good. 01:50 Ventral portion. 01:51 Clear? So now, what is your patient what is your child predisposed to? Infection. 01:58 Infection. 01:58 Hypospadia more common than epispadia Hypospadia more common than epispadia, but there are complications that you want to know for both. 02:05 In hypospadia, it is once again the ventral portion of the penis that is failure to fuse if you remember from embryology. 02:12 Whereas epispadia, as the name implies, would be the – Well, that would be the top of the penis, but they’re not going to say “top of the penis.” Clinically, they’ll call it what? The dorsum. 02:21 Same concept. 02:22 What’s the dorsum of your foot? When you say dorsiflex, what are you doing? You’re taking the foot and you’re moving it towards your leg, aren’t you? Well, here, you have the top of the penis, which is the epispadia. 02:32 Failure to fusion here, what’s your complication in a child? It’s called bladder extrophy. 02:37 E – epispadia. E – extrophy. 02:41 Now the complications as I said, hypoaspadia is more common than epispadia. 02:46 Take a look at number one so that you know as to where you are vicinity-wise. 02:50 Number two, as the name implies, well, extrophy. 02:52 But in addition to that, there are a couple of other things here that you want to know. 02:55 If you have failure of your lateral fusion of your abdomen, then you can have what’s known as an omphalocele. 03:03 And an omphalocele would mean that you have herniation of the abdomen in a child. 03:09 And when this happens, it is still covered by the peritoneum. 03:12 Keep that in mind. 03:13 Omphalocele, the failure of lateral fusion. 03:16 In embryology, we’ve also looked at gastroschisis and that would mean that the peritneum is not covered. 03:22 A couple embryologic issues. 03:24 Hydrocele: Well, with hydrocele, what ends up happening is that there’s accumulation of fluid in the cavity. 03:32 And we’ll talk more about hydrocele when the time is right and we’ll compare hydrocele to varicocele. 03:38 And for us, varicocele will play more of a role in pathology, but hydrocele, just as important. 03:44 Number four represents a hernia and that type of hernia that I was referring to would be either your omphalocele or something called gastroschisis. 03:54 A quick little overview of your embryology and then some of the associated pathologies that you’ve seen. 03:59 Let us keep moving.

Which condition is associated with hypospadias?

Which physical finding leads to omphalocele?

What is the MOST accurate definition of epispadias?