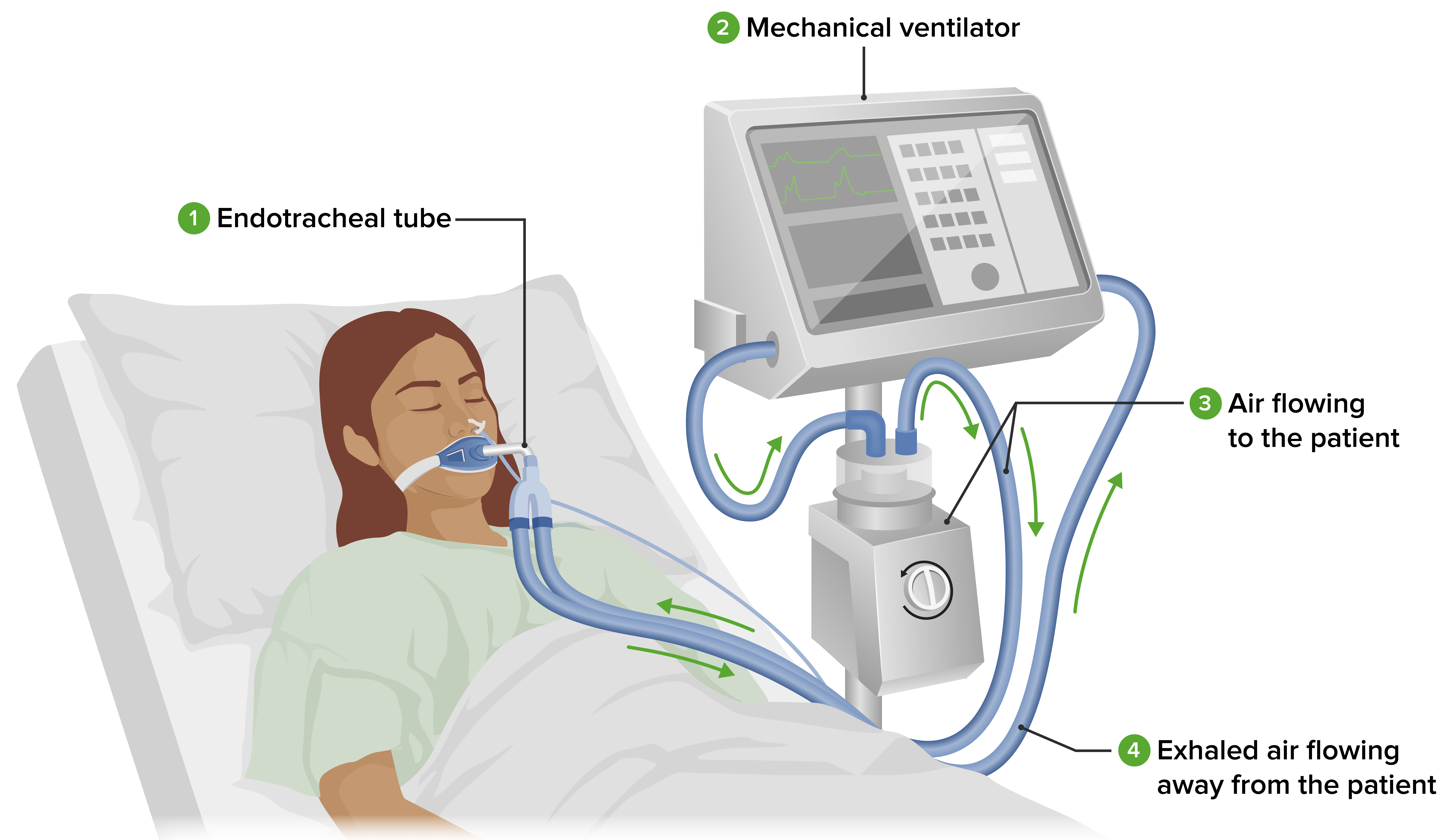 Invasive mechanical ventilation
Invasive mechanical ventilation (IMV) is an advanced airway modality used for individuals with immediate or impending respiratory failure and/or in preparation for surgery. The IMV technique involves positive pressure ventilation delivered to the lungs through an endotracheal tube via a ventilator. The ventilator can be set to specific modes that determine how the machine assists with breathing. The modes are tailored to the individual's needs. The mode refers to the characteristics of mechanical ventilation and mainly includes trigger (how inspiration begins), cycle (how inspiration ends), and limit (when inspiration should be aborted). The most commonly used mode is assist-control ventilation, which is usually followed by pressure-support ventilation for weaning. Careful consideration should be exercised while planning extubation, as IMV is associated with complications.
read more 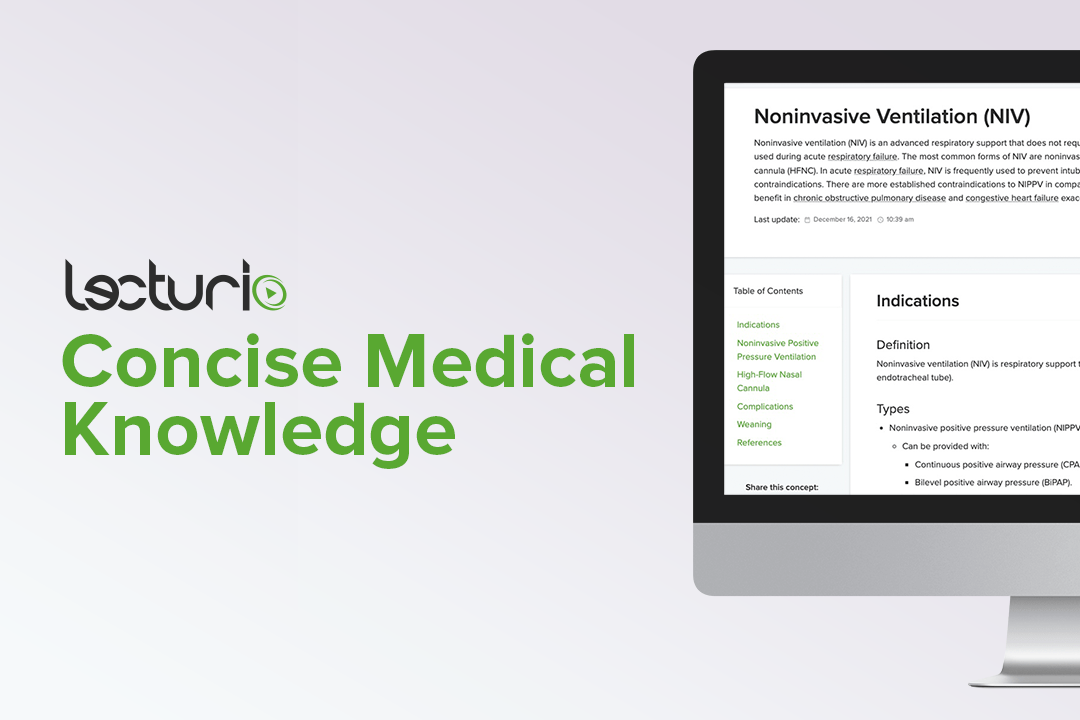 Noninvasive Ventilation (NIV)
Noninvasive ventilation (NIV) is an advanced respiratory support that does not require an artificial, invasive airway. This technique is commonly used during acute respiratory failure. The most common forms of NIV are noninvasive positive pressure ventilation (NIPPV) and high-flow nasal cannula (HFNC). In acute respiratory failure, NIV is frequently used to prevent intubation for invasive mechanical ventilation, if there are no contraindications. There are more established contraindications to NIPPV in comparison to HFNC, but NIPPV has demonstrated clear mortality benefit in chronic obstructive pulmonary disease and congestive heart failure exacerbations.
read more 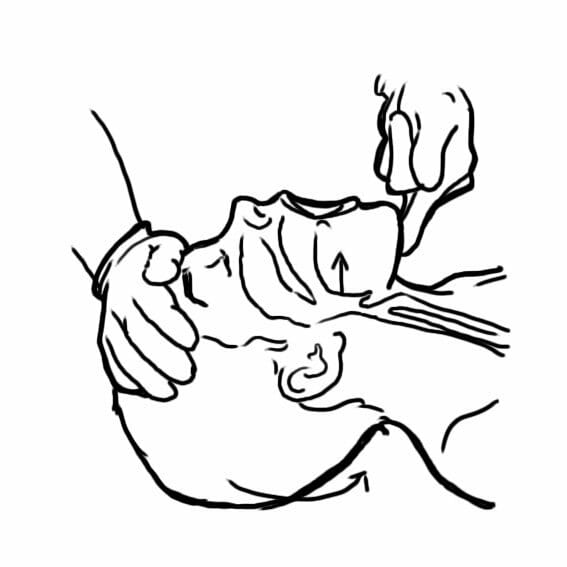 00:06 So we're now going to talk about my nightmare and the nightmare of virtually every anesthesiologist. And that's the failure to secure the airway, because this can lead to death, can lead to immediate cardiac arrest, and it can lead to permanent brain damage, chronic vegetative states, from cerebral hypoxemia. 00:30 This is the single most important aspect of the anesthesiologist's job. 00:36 And really, it's what we get paid for. If we fail in this respect, we failed in every respect, because obviously, if the patient doesn't survive the anesthetic, having surgery is kind of a waste of time. We're going to talk more about standard intubation techniques and techniques used in the difficult airway situation, in Lecture 5, under General anesthesia. But some of the warning signs, just to give you a preview of what's going to happen, include poor mouth opening; normally a mouth should open 5 - 6 centimeters, but if it only opens less than 2 - 3 centimeters, that's a warning sign. Poor neck mobility. So, the inability to extend the neck is a major concern and it's common in elderly people. So we see it a lot. Small or deformed mandible. This can happen in congenital anomalies, it can happen with damaged mandibles, it can happen with people who have very poor dentition, and have a large overbite and a poorly developed mandible as well. We mentioned we measure the mento-thyroid distance, which is the distance from the tip of the chin to the thyroid cartilage, which is the large cartilage in the neck, the airway. And if it's less than 4 centimeters, we know we may have a problem. 02:00 Short, thick neck can be a problem. Fixed flexion deformity of the neck, as seen in some diseases such as ankylosing spondylitis, and anything that interferes with normal airway throughput, such as a tumor, an abscess or hematomata, can all lead to difficult airway situations. Most anesthesiologists take the view that we should always be conservative when approaching the airway. And if there's any doubt that we can get a tube in, in the patient, asleep and paralyze, then we shouldn't put them to sleep, and we shouldn't paralyze them. We should do an awake intubation. Now, awake intubation sounds like a terrible technique, I can just see all of you gagging, and thinking all kinds of horrible things about the person who would subject you to this. And it sometimes isn't very pleasant, I'll be very honest about it, but it is the absolute best way to prevent failure in intubation. Because the patient is awake and maintains his or her airway through the whole procedure. So basically, if you are concerned about getting a tube in, or you think it isn't going to happen, then you should definitely do an awake intubation. There are other techniques that allow us to make somewhat difficult intubations easier. And these include airway adjuvants available to use immediately. A stylet, which is a malleable device that goes through the tube and gives the tube shape. A bougie, which is an even longer device which also can be passed down through the, through the cords, even in a situation where it's very, very difficult to see the cords, and then the tube can be passed down, the endotracheal tube can be passed down over the bougie. 03:48 Video-laryngoscopes actually allow us to use a screen and see exactly where we are. The laryngeal mask airway is a device that allows us to, in certain circumstances, intubate through the LMA and secure the airway that way. And then, if worse comes to worst, we have to do a surgical airway. And for that we need to have a crico-thyrotomy kit immediately available. And most of us dream that we'll never do this, and as of this moment, and I'm pushing my luck here, I have not had to do this. 04:24 You should always keep 'difficult intubation' kit immediately available in the operating room area. 04:30 It doesn't have to be in every operating room, but it needs to be nearby. And you need to have a portable kit, because anesthesiologists get called all over the hospital to secure airways in people that other people have, other physicians have failed to secure. So, emergency room, tents of care unit, cardiac arrest on the wards. We get called to these on occasion simply because our colleagues and other specialists have failed to intubate the patient. There's a “difﬁcult airway” algorithm. Most Anesthesiology Societies have a 'difficult airway' algorithm. 05:06 The American Society of Anesthesiology has a very extensive one. The only negative thing I can say about it is, it's probably too extensive, it's hard to memorize. The Canadian Anesthesiology Society has a very simple algorithm. It may be too simple. The UK has the Difficult Airway Society, which is a society that is devoted to coming up with better ways of dealing with difficult airways. 05:30 And one should definitely look at their web page and be prepared to deal with a difficult airway. So if, be prepared in any difficult airway to call for help, and to call for help early! Get people in there to help you. Because, if you don't call for help, and you get into a situation where you cannot intubate the patient, you may be responsible for that patient not surviving.

The lecture Introduction – Difficult Airway by Brian Warriner, MD is from the course Anesthesiology: Introduction.

What are the warning signs of a potentially difficult airway?

Which of the following would indicate that it is probably difficult to secure the airway?

When intubating a patient, what is the BEST way to avoid an intubation failure?

In the worst-case scenario, when intubation fails, which of the following should be used as a last resort?