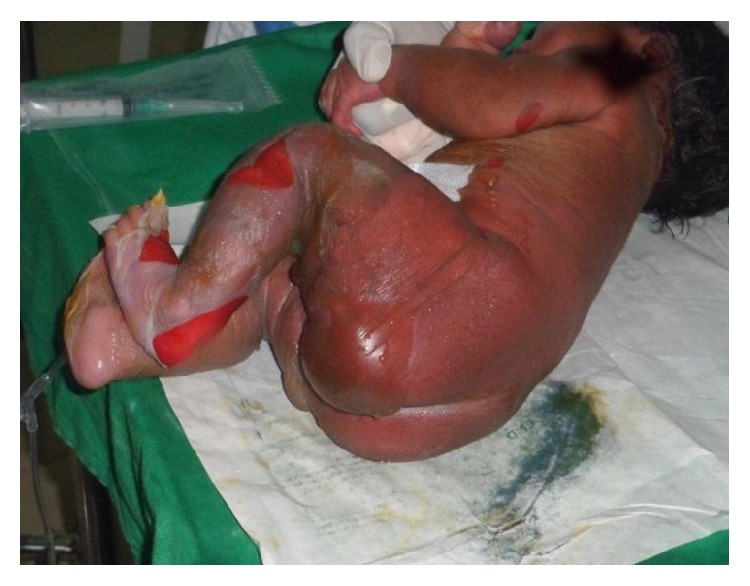 Staphylococcal Scalded Skin Syndrome (SSSS)
Staphylococcal scalded skin syndrome (SSSS), also known as Ritter disease and staphylococcal epidermal necrolysis, is a toxin-mediated condition caused by Staphylococcus aureus. The exfoliative toxin produced disseminates and cleaves desmoglein 1 in the epidermis, causing separation and detachment of the skin. SSSS most commonly affects young children. Prodromal symptoms precede diffuse cutaneous erythema, tenderness, bullae formation, and superficial desquamation. The mucous membranes are spared. The diagnosis is made clinically and can be confirmed with culture data (targeting possible primary infection sites) and biopsy. However, cultures of bullae are not useful. Antibiotics and supportive care should be initiated as soon as the diagnosis is suspected.
read more 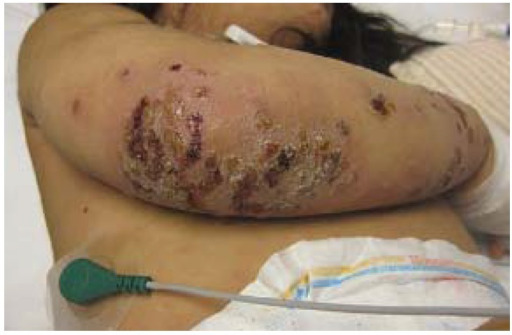 00:00 The topic is impetigo. Impetigo is a superficial skin infection, could be caused by either strep or staph. So now, there are a couple of things that I want to make sure that we go through or that we are clear about in micro. You have cellulitis, severe syphilis, and then you have impetigo. Make sure that you’re clear about those 3 presentations before we move on. All 3 could be caused by strep. Cellulitis will be a little bit deeper. 00:29 Syphilis would be extremely rapid caused by most likely strep A, fiery red, we call that St. Vincent’s fire, and here we have impetigo, either strep or staph. Demographics, often in children, and usually on the central phase. And if you take a look at the picture here, you’ll notice that it’s honey-crusted lesions, extremely distinctive and characteristic for impetigo, honey-crusted lesions that we’re seeing here specifically in the perioral area. Now, if in fact, it is going to be a strep A infection and approximately let’s say 4 weeks later, the patient, the child, starts having let’s say blood that appears in the urine. This is the discussion that we’ve had earlier where if this impetigo is in fact being caused by group A streptococci or pyogenes that approximately 4 weeks later we have now developed post-streptococcal glomerulonephritis. So, are we clear? Diagnosis, clinical appearance, no doubt culture obviously and cannot be diagnosed with serologic test for strep. Management, oral antibiotics and you have topical mupirocin ointment. 01:46 Topic here is staph-scalded skin or scalded skin syndrome. We have exfoliation caused by toxin produced by Staph aureus infection. So, our topic is staphylococcal scalded skin syndrome. We have a toxin of the Staph aureus which is going to cause an issue and whom, infants, and unfortunately most common with infants and those with renal failure, scalded skin syndrome. With staph, the management with IV antibiotics either vanco or Nafcillin and supportive care.

A 10-year-old girl with skin lesions around the mouth shows erythematous plaques with honey-colored crusting. What is a potential complication of this patient's current disease?

Which of the following is an appropriate treatment for staphylococcal scalded skin syndrome?

i think there should be more information about impetigo regarding types(bollous, non bollous) and ddx . regarding ssss pictures and pathology should be added will be more helpful

i think there should be more information about impetigo regarding types(bollous, non bollous) and ddx . regarding ssss pictures and pathology should be added will be more helpful