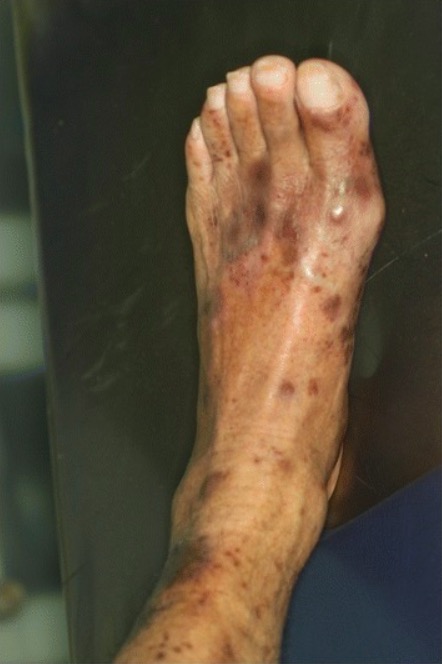 Immune Thrombocytopenic Purpura
Immune thrombocytopenic purpura (ITP), formerly known as idiopathic thrombocytopenic purpura, is a condition that develops secondary to immune-mediated destruction of platelets, resulting in thrombocytopenia (platelet count < 100,000/mm³). Immune thrombocytopenic purpura can be either primary or secondary due to drugs or underlying disease. The diagnosis is usually one of exclusion. Many patients with ITP are asymptomatic. When present, symptoms are primarily related to bleeding (e.g., bruising, petechiae, epistaxis), but fatigue is also common. The severity of thrombocytopenia in patients with ITP is variable. When platelet counts drop to < 20,000/mm³, the risk of serious bleeding increases. Treatment may include platelet transfusion, steroids, IV immune globulins, and/or splenectomy. Some cases remit spontaneously; others generally have a good prognosis with appropriate therapy.
read more
Load more
Share
Ask Questions
Take Notes
Download Slides
Report Mistake
Comments
show all Show less
My Notes
show all Show less
Learning Material 2
show all Show less
Report mistake
Transcript
0 of 0

00:00 Let’s switch gears now to Immune Thrombocytopenic Purpura. This is an acquired cause of an acute bleed in children. ITP is really an autoimmune attack against platelets. 00:15 The spleen clears the platelets with the bound antibodies and the platelet count typically falls less than 20,000. If a patient has 80,000 platelets, it’s unlikely to be ITP. Now, the majority of ITP is going to be acute. It’s going to be an autoimmune disease that suddenly strikes. The platelet count typically will return to normal after about 6 months and usually does not come back. This disease is not usually chronic. Many may resolve without any therapy at all. It’s usually associated with a previous viral infection or perhaps a vaccination. Now, this is to be compared to the minority of cases which are chronic ITP and that’s about 20% of cases. In this case, the ITP persists more than 12 months and it’s usually associated with some underlying autoimmune disorders such as lupus. 01:13 Okay. These patients will generally appear with acute bleeding without any known cause. 01:19 There’s sometimes a proceeding viral illness like in the acute ITP example we gave previously. These patients may have intracranial hemorrhage but that’s really rare. 01:31 Usually, you need less than 5,000 platelets in order to have intracranial hemorrhage. 01:37 They may notice bruising, they may have more severe nosebleeds, and you may notice a petechial rash on the skin which is indicative of bleeding. Diagnosis is made very simply by a CBC which shows a platelet count less than 20,000 and nothing else wrong with the CBC. Additionally, the patient should have no other physical exam findings. For example, if a patient has a matted area of lymph nodes in their neck, this is probably lymphoma or leukemia and this probably isn’t ITP. So, we want to diagnose other conditions through a complete physical exam that will then rule out ITP as the diagnosis. So, how do we manage these kids? Well, we will check weekly CBCs to track the severity of the disease. If it’s not clear what’s going on with this patient, if we’re not convinced this is ITP then we may get a bone marrow to make sure that the other cell lines are looking okay. The bone marrow will show increased number of megakaryocytes. In event of severe Sometimes, in these children, the larger platelets are extra "sticky", and so ironically patients can sometimes present with a clot and a low platelet count. 02:51 In event of severe ITP, which is platelet count of less than 10,000, we only give platelets if they’re actively bleeding. This is because those platelets are likely to be consumed quickly by the autoimmune process.We do want to avoid ibuprofen or any drug that can prevent the clotting cascade from occurring. In patients with severe ITP, we may give IVIG. 03:19 What IVIG does is it provides an alternative target for the immune system. Instead of consuming those immunoglobulins that are bound to platelets, the body is now busy consuming the immunoglobulins which we have transfused in the patient. And remember, IVIG tends to stick around for a while, 3 or 4 weeks, and so we can get by for a period of time. One alternative to IVIG that some people like to use is if a patient is Rh positive, they can give anti-D immunoglobulin or RhoGAM. Now, RhoGAM is usually given to pregnant women, but in this case we might use it because the RhoGAM will stick to those red blood cells and, again, provide an alternative target for the immune system instead of attacking the platelets. Unfortunately, occasionally in these patients, they may get an anemia because now they are in fact targeting the red blood cells, and so we should watch these patients carefully in terms of developing anemia by getting weekly CBCs anyway. Another alternative is steroids and sometimes that can be helpful in reducing the autoimmune component of the disease. Remember though, the therapy temporizes the disease, it doesn’t cure it. In the majority of cases, it goes away on its own; in the minority of cases, it’s part of a bigger disease process that we now have to treat such as lupus. So, that’s a quick review of these acquired bleeding problems in children. 04:50 Thanks for your time.

The lecture Idiopathic Thrombocytopenic Purpura (ITP) by Brian Alverson, MD is from the course Pediatric Hematology.

A RH- patient with ITP presents with non-life-threatening superficial bleeding and a platelet count of 9,000/mm3. What is the next best step in the management of this patient?

Which of the following platelet counts is most consistent with idiopathic thrombocytopenic purpura?

Which of the following triggers is most common in acute ITP?

Spontaneous intracranial hemorrhage in a patient with ITP is typically expected at what platelet levels?

While managing a patient with severe ITP, which of the following is not true?