Hydrocephalus (Water on the Brain) 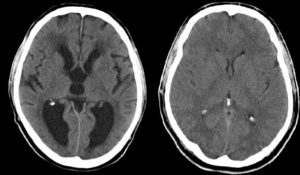 00:01 Here, we’ll take a look at hydrocephalus. 00:04 What can you expect? Increased intracranial pressure. 00:08 What are the different ways in which we can develop hydrocephalus? Well, interesting enough, be careful with this one. 00:16 Each one of these bullet points that I’m going to give you here are incredibly important clinically. 00:22 So what does hydrocephalus mean to you? It means that within the, let’s say, subarachnoid space or so it appears that the subarachnoid space is accumulating fluid. 00:32 Hydro-, hydro-, hydro-. 00:36 But what if you’re not? What do you mean? Well, what if the ventricles look like they’re dilated? What ventricles? I want you to focus on the lateral ventricles. 00:46 Are you there? Lateral ventricles. 00:48 Okay, good. 00:49 I want you to go ahead and think about transverse section of your lateral ventricles and looks as though that it’s enlarged. 00:58 So maybe it’s fluid accumulating in there, cerebrospinal fluid resulting in hydrocephalus. 01:02 But, there’s absolutely no indication of increased intracranial pressure. 01:06 But your patient is 70 years of age, forgets everyone’s name. 01:11 Even walks out the door naked and never comes back. 01:15 Obviously referring to Alzheimer’s disease. 01:18 And what do you know about Alzheimer’s and the size of the brain? So now, the cerebral cortex is undergoing atrophy, atrophy, atrophy, atrophy, atrophy. 01:27 The more that the brain parenchyma – Are you picturing this for me, please? Close your eyes and picture this. 01:31 As the brain and its parenchyma’s undergoing atrophy, let it be Alzheimer’s or maybe there is frontotemporal dementia formally known as Pick's disease, then, the ventricles look as though that they’re enlarged. 01:45 It looks as though that there is going to be cerebrospinal fluid. 01:50 So just keep that in mind as being an important differential in dealing with hydrocephalus, and that is specifically called ex-vacuo that I’m referring to. 01:58 But in general, when you’re dealing with hydrocephalus, dilation of the ventricles perhaps due to cerebrospinal fluid. 02:04 But then, the next question is – How did cerebrospinal fluid accumulate within the ventricles is your question. 02:12 Because this will then give you the clinical description of what type of hydrocephalus. 02:17 Is it communicating? Is it noncommunicating? Okay? If you’re being confused with that, trust me, by the time we’re done with this section right here, you’ll be golden. 02:27 First, let’s begin with communicating. 02:30 So what does communicating mean to you? I want you to picture for me once again, transverse section, or maybe sagittal section, in which you’re noticing the lateral ventricles. 02:40 You’re moving into the third and then fourth ventricle, and then what do you come out of? Who comes out of? The cerebrospinal fluid. 02:48 It comes out of the Luschka and it comes out of the Magendie, don’t they? The apertures. 02:53 And as long as that is open between the lateral third and fourth ventricles, out through the apertures, bathing the spinal cord, then it’s all communicating. 03:03 Now, how in the world can you have an increase in intracranial pressure? “How can you accumulate cerebrospinal fluid if there’s perfect communication with the ventricles, Dr. Raj?” Ah, well, where does your cerebrospinal fluid get drained? Where does it get drained? Good. Arachnoid villi. 03:18 The arachnoid granulation. 03:20 So after you bathe your spinal cord, you make your way up into the sinuses. 03:26 And then you’re going to drain into the arachnoid granulation. 03:30 So what if there is meningitis and post meningitis? Or for whatever reason, let’s say, there was fibrosis and there’s scarring taking place over the arachnoid villi and granulation. 03:42 If that occurs, you can no longer drain. 03:46 What are you going to result in? Increased cerebrospinal fluid in the subarachnoid space. 03:51 But the communication existed, didn’t it? My problem was up in the arachnoid granulation. 03:56 So you call this a communicating type of hydrocephalus. 03:59 It’s nonobstructive. 04:02 Every word that comes out of your mouth in medicine must be accurate dead on. 04:07 Otherwise, if you start memorizing, you’re going to trip over your words and you don’t want to do that. 04:13 Hydrocephalus is a common complication of TB meningitis. The most common type of hydrocephalus in that scenario would be communicating hydrocephalus due to extensive scarring of the arachnoid granulation. Rarely, an obstructive form of hydrocephalus is seen in TB meningitis due to the obstruction of the foramena of magendie and Luschka. 04:37 And if that’s the case, may result in hydrocephalus, most likely the communicating type. 04:44 Noncommunicating, what may happen here? A noncommunicating has a list of differentials. 04:50 Lists of differentials that are long. 04:52 For example, what’s the most common brain tumor in a child? Medullablastoma. 04:58 Medullablastoma may be affecting your cerebellum, occiput. 05:05 And therefore, compressing upon the fourth ventricle. 05:07 What’s the most common type of astrocytoma in a child? What if you find a cystic type of image on the cerebellum? The most common type of astrocytoma in a child will be pilocytic. 05:23 This may then cause compression upon the fourth ventricle, are you with me? What’s the name of the condition in which your posterior fossa might become too small? Think about the posterior fossa. 05:35 What if it’s too small, what’s it going to do? I’m pushing my occiput forward, forward, forward. 05:41 What am I going to do? I’m going to then compress my fourth ventricle. 05:45 This is called Arnold-Chiari. 05:47 You see as to how the list is a little bit longer here with noncommunicating, right? Or for that matter, any space-occupying lesion that is then causing blockage of cerebrospinal fluid from passing through your lateral third or fourth ventricle is called noncommunicating obstructive type of hydrocephalus. 06:07 Compression of third or lateral ventricles by mass or mass effect from edema. 06:12 Anything. 06:14 Any type of mass, which is then causing lack of communication is obstructive. 06:20 Now, obviously, here, if you don’t treat this, at some point in time, we will discuss our different types of herniations. 06:28 Maybe it’s subfalcine. 06:30 Maybe it’s your transtentorial, uncal herniation. 06:34 But obviously, the brain parenchyma is then going to herniate in whatever region if left untreated.

The lecture Hydrocephalus (Water on the Brain) by Carlo Raj, MD is from the course Other Diseases: Hydrocephalus, Neuromuscular Disease, Plexopathy and Mononeuritis.

Which of the following apertures opens the fourth ventricle on the midline into the subarachnoid space?

A 9 y/o male patient presents to your office with a severe and constant headache for the last 1 week. His parents complain that he has been having difficulty concentrating at school and seems drowsy. What is the likely cause of his condition?

A 56 y/o male patient with a long standing tuberculosis, colorectal cancer, and diabetes presents to your office with a constant headache. He is non-adherent to his anti TB drugs. He describes the pain as dull in nature and rates it as 7/10. There is no history of vision or hearing problems, chest pain, diarrhea, or constipation. Which of the following conditions is likely causing his symptoms?

Author of lecture Hydrocephalus (Water on the Brain)

I love his presentation style and details regarding the topic. He keep you engaged and information is retained the first time.

I love his presentation style and details regarding the topic. He keep you engaged and information is retained the first time.