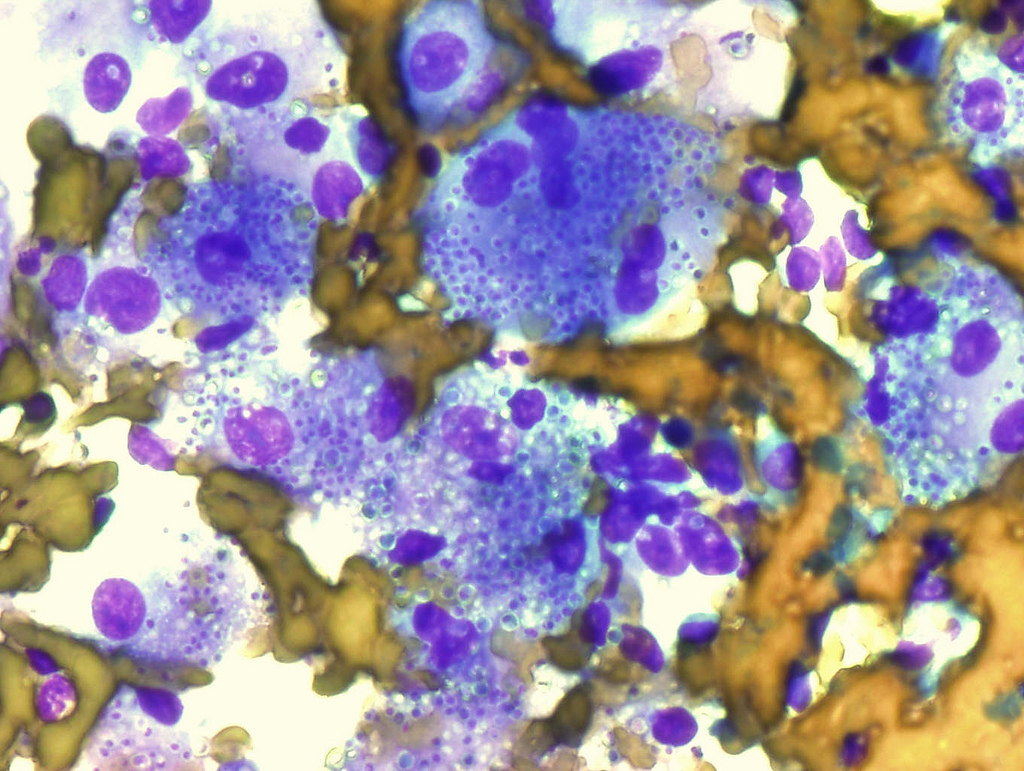 Histoplasma/Histoplasmosis
Histoplasmosis is an infection caused by Histoplasma capsulatum, a dimorphic fungus. The fungus exists as a mold at low temperatures and as yeast at high temperatures. H. capsulatum is the most common endemic fungal infection in the US and is most prevalent in the midwestern and central states along the Ohio and Mississippi River valleys. Transmission is through inhalation, and exposure to soils containing bird or bat droppings increases the risk of infection. Most infections are asymptomatic; however, immunocompromised individuals generally develop acute pulmonary infection, chronic infection, or even disseminated disease. Diagnosis is via different modalities, with the visualization and/or growth of the causative organism made using direct microscopy, histopathology, or culture studies. Management is dependent on disease severity. The antifungal medications that are used include amphotericin B and itraconazole.
read more
Load more
Share
Ask Questions
Take Notes
Download Slides
Report Mistake
Comments
show all Show less
My Notes
show all Show less
Learning Material 2
show all Show less
Report mistake
Transcript
0 of 0

00:00 Another type of fungal illness is called histoplasmosis and this is called by the species called histoplasma. This is a fungus that typically lives in the soil, especially soil that is rich in bird or bat droppings. This disease, histoplasmosis, occurs worldwide, can be found in the US, in the central and eastern states, parts of Central America and South America, Africa, Asia and Australia, so it's globally distributed. You acquire this disease by inhaling fungal spores. 00:39 And again, most people inhale these spores on a daily basis and don't become ill, but if you have an immunosuppressive disease such as HIV-AIDS, or if you've had an organ transplant and are undergoing immunosuppressive therapy, or if you're infant or a very old person, these extremes of human age don't have very good immune systems; babies have not yet developed their immune system, people over 55 years old, their immune systems are slowly deteriorating, so they are at risk for infections with these otherwise innocuous spores as well. These fungi can cause infection of the lung in these at risk individuals, and just like some of the other diseases we talked about, those infections can become systemic, they can spread to the blood and go elsewhere and in particular histoplasmosis is known to go to the brain as well as the spinal cord. Just like many of the other fungal diseases of humans, this one is not contagious among humans. 01:43 Fungi are major pathogens of plants, insects and amphibians. A couple of examples here, there is a disease called chytridiomycosis, it's caused by a fungus that I will not attempt to pronounce, which is causing global decline in frog populations. You may have heard about this, it's in the news quite often, I think we've lost 30% of the world’s amphibians as a consequence of this fungal infection. Another example is a disease called white nose syndrome. Here, what has been noticed is that there have been extensive deaths of bats due to a fungus, again, growing in the bat, which colonizes the skin of the animal and makes it appear white, that's why it's called white nose syndrome. And again, bats are very important to the ecology of the world and losing them is simply not acceptable. Fusarium is a fungal disease of cereal crops, cereal crops are very important for feeding most of the world, fusarium will destroy them very rapidly, so it's an economically important fungus and we have to figure out how to control it. And finally the last example is a fungal disease which infects ants. So the fungus enters the ant and alters its behavior. Normally ants like to move about higher in a plant, when they're infected with this fungus the ants go down to the forest floor, and there the temperature is lower and fungi like to reproduce at lower temperatures and the ant will find the lowest leaf on a plant and clamp onto one of the major veins and just remain there. So the ant will be taking nutrients from the plant, it will not move anymore because of the fungus that has gone to its brain and then eventually what comes out of the skull of the ants, well ants don't have skulls, what comes out of the head of the ant, is a fungal spore producing structure. It just pops right out of the ant's head, spores drop out of it and that releases new fungi into the environment, of course at that point the ant is then dead. So the fungus takes over the ant behavior, you could almost say it makes the ant into a zombie.

The lecture Histoplasmosis – Fungi by Vincent Racaniello, PhD is from the course Microbiology: Introduction.

What is the environmental source of histoplasmosis?