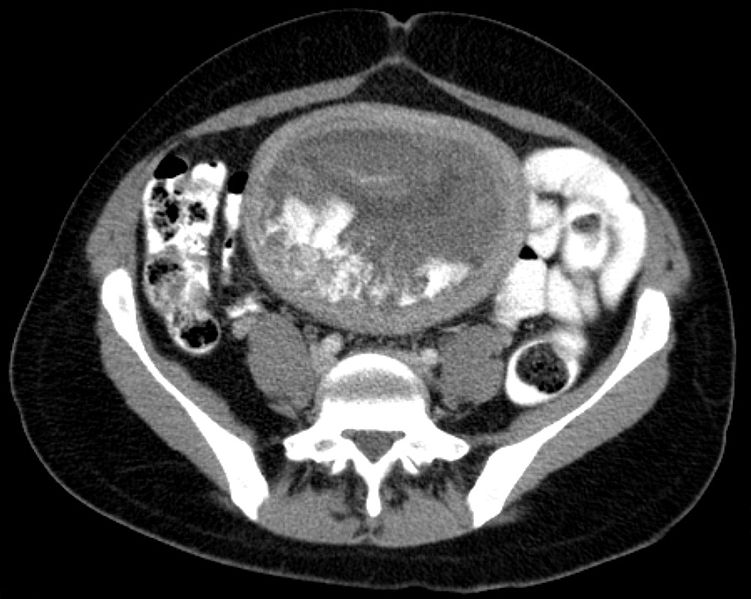 00:01 So what is a heterotopic pregnancy? This is the presence of an ectopic pregnancy and an intrauterine pregnancy at the same time. 00:08 This is actually very, very, rare so if you do see the presence of an intrauterine gestational sac, yolk sac, and embryo this really essentially excludes ectopic pregnancy. 00:18 So what exactly is serum HCG? We hear a lot about beta HCG levels. 00:24 It's actually a hormone that's produced by the placenta after implantation of a fertilized ovum. 00:29 The levels usually double every 2 to 3 days in a normal pregnancy and that's what you kind of want to look for to make sure that the pregnancy is normal. 00:37 So in a patient that has a serum beta HCG level of greater than 3000, the diagnosis of an intrauterine pregnancy should be identified. 00:45 However, if it's less than about 3000, then the pregnancy may not actually be seen by ultrasound. 00:50 It may be too small to be seen by ultrasound at these levels and in this situation if you don't see an intrauterine pregnancy but the patient has a positive beta HCG level of any size, the ectopic really cannot be excluded. 01:04 So in these patients you really do need to do follow up serial imaging by ultrasound and of the beta HCG levels to make sure that everything looks normal overtime. 01:14 So again, in the absence of the visualized pregnancy but the setting of a positive beta HCG level, ectopic pregnancy really cannot be excluded. 01:22 So this is a very important point to remember in patients presenting in very early pregnancy with lower abdominal pain. 01:28 A molar pregnancy is very rare. 01:31 It's an abnormal proliferation of trophoblastic tissue and it's called a hydatiform mole. 01:36 This may be confined to the uterine cavity but they may also invade the myometrium Invasive moles are the ones that invade the myometrium, can actually hematogenously metastasize to the brain and the lungs so this is something that you also wanna be aware of when you're looking at an early pregnancy ultrasound. 01:54 So clinically, molar pregnancy present as an abnormally large uterus especially given the patients dates, beta HCG levels tend to be very, very, high over about a 100,000 and a patient often presents with vomiting and vaginal bleeding. 02:10 In imaging, the molar pregnancy presents us an echogenic tissue within the uterine cavity, the uterus is actually abnormally enlarged and it contains multiple cystic spaces which contain a grape-like appearance. 02:25 The fetus also appears very abnormal and sometimes you actually don't see a fetus, all you see are these multiple cystic spaces. 02:33 So let's take a look at an ultrasound of a molar pregnancy. 02:36 So as you can see here on the sagittal image of the uterus there are multiple cystic spaces within this uterine cavity. 02:45 The entire mass looks hyperechoic and we actually don't see any evidence of a normal fetus here so this is an example of a molar pregnancy. 02:54 Molar pregnancies need to be evacuated with suction curettage. 02:58 If preservation of fertility is really not of importance, then often hysterectomy is performed because again there is that chance that the mole can invade the myometrium, and beta HCG levels are actually monitored weekly until they're undetectable for 3 weeks and then monthly for 6 months and this is really in case there's any kind of invasion that really just wasn't seen on imaging. 03:18 So we've gone over some common abnormalities and some common normal findings of first trimester ultrasound. 03:24 Again, it's important to remember that when a patient comes in an early pregnancy, ultrasound is really the key method of imaging because it does not cause any kind of problems and it doesn't have any radiation associated with it.

The lecture Heterotopic and Molar Pregnancy by Hetal Verma, MD is from the course Abdominal Radiology. It contains the following chapters:

What is TRUE regarding a molar pregnancy?

What is a heterotopic pregnancy?

Radiology is no longer just shadows for me. The concepts are well explained in proper clinical contexts.

Radiology is no longer just shadows for me. The concepts are well explained in proper clinical contexts.