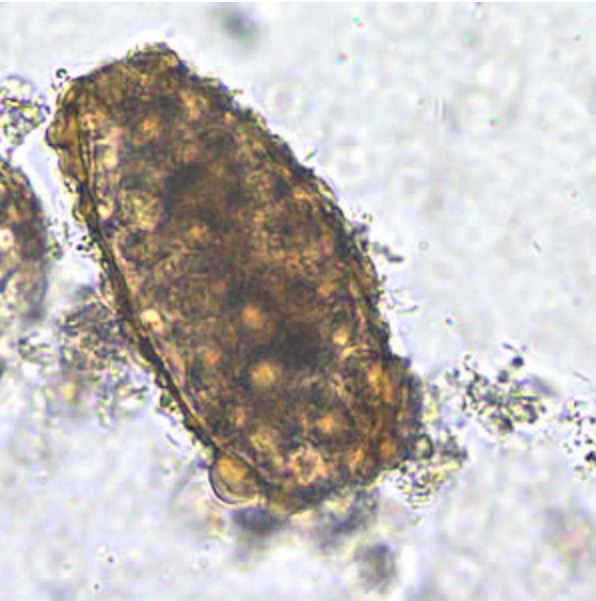 Ascaris/Ascariasis
Ascaris is a genus of parasitic nematodes. The infection, ascariasis, is most often caused by A. lumbricoides. Transmission occurs primarily via ingestion of water or food contaminated with Ascaris eggs. Most patients with ascariasis are asymptomatic. If symptomatic, characteristics typically follow 2 phases, which correlate with the migration of the parasite through the body. The early phase may include cough, dyspnea, and wheezing. The late phase typically includes abdominal discomfort, bloating, nausea, and intermittent diarrhea. Heavy infections can cause intestinal obstruction and growth impairment in children. A diagnosis is made by recovering a full-grown parasite from the patient’s stool or by finding eggs in the patient's stool during a microscopic examination. Management includes anthelmintic therapy with albendazole, mebendazole, or pyrantel pamoate.
read more
Load more
Share
Ask Questions
Take Notes
Download Slides
Report Mistake
Comments
show all Show less
My Notes
show all Show less
Learning Material 2
show all Show less
Report mistake
Transcript
0 of 0

00:01 Now we've talked so far about protozoan parasites. These are single cell parasites. 00:08 Now we're going to talk about a different category and these are the helminths or worms. 00:14 These are multicellular animals or what we call metazoa. So metazoa is another name for multicellular animals for example jelly fish, or humans, or anything in between, these are metazoas. 00:30 So helminths are metazoas. Another word for helminths is worms Helminths can reproduce sexually. They can be male worms and they can be female worms. 00:43 And if you ask me the question, how do they find each other. My answer is they find each other delightful. 00:51 They can also be hermaphroditic. One worm can be both sexes and reproduce on its own. 01:00 We can further divide these helminths or worms into two separate categories. 01:06 First, they are the round worms. These are also called nematodes or non segmented roundworms. 01:14 So this may be very much like the earthworms that you used to seeing, they're round and cross-sectioned. So these are called nematodes. 01:25 An example of a nematode is shown here. Again, these are round, non segmented worms. 01:32 You can see via the scale on the ruler here, this one is probably ten to twelve centimeters long. 01:39 It's Ascaris lumbricoides. This worm will live in your intestine. It's a good idea not to get this infection. 01:48 Then we have flatworms. As you can see in this picture, they are flat and if you cut them in half they would be asymmetric in the cross section as opposed to a roundworm which is gonna be symmetrical. 02:00 An example of a flatworm is shown here. These are segmented flatworms So we further divide the flatworms into two more categories, the segmented flatworms. These are called cestodes or tapeworms. 02:18 They can be very small, millimeters. They can be meters in length. 02:23 And this one is call Taenia saginata. This is another worm that can live in your intestine. 02:30 Can be as long as your intestines are and sometimes you wouldn't even know it. It's pretty scary. 02:36 Okay, back to the categorization. The other type of flatworm is a non-segmented flatworm. 02:45 These are called Trematodes or flukes. Short worms, now we're not talking about meters in length. 02:51 Much much shorter with nonsegmented bodies. And an example of this is the Schistosoma, a photograph of which is shown here. 03:00 This is much larger than it appears in real life. This would be a very tiny worm which you could barely see with a naked eye. 03:09 Now these helminths, the worms, all the worms which we've been talking about, these are typically extracellular parasites. They reproduce within an organism but outside of the cells. 03:23 Some of them have a cyst phase where in the host organism they reproduce as worms but in the environment, they're cyst, so they're stable. And then when they get back into the host, they reproduce as worms again. 03:38 Some of these worms have very complicated life cycles. And in another lecture, we'd be going into that in some detail. 03:45 For example this particular one has a cycle in humans which involves a cyst phase that's in aquatic environment and there's also a dog involved in this cycle as well. So not all of them remain solely in people. 04:01 Many of these helminths don't complete their entire life cycle in a single human. 04:06 They only complete part of it and they finish it in another human. 04:13 And the disease caused by these worms is typically not a consequence of one worm becoming two and then four and eight and so on. It's a consequence of how many worms you are initially infected with. 04:29 So they don't reproduce within you but if you have a lot enter you initially, that causes more disease. 04:34 So the parasite burden is directly related to the number of helminths that are acquired. 04:41 So the more worms you acquired, the more serious your disease is. 04:48 This is an example of that. This is a graph of a study that was done in Korea in which they took samples from individuals and they just counted the number of worms that were in each person. 05:00 So on the very left, they are the number of people with zero worms. So in this study, just over four hundred people had zero worms. 05:08 And then you can see the number of individuals with one, two, three and more worms. 05:12 You can see quite a few people have one worm, fewer with two and so forth. It goes down and down and down. 05:18 But then look all the way to the right, you can see there are a good number of people with fifteen or more worms. 05:25 These are gonna be the sickest individuals because they have a high worm burden. 05:29 And they will also be able to transmit the worm very effectively to other people because they have so many.

The lecture Helminths (Worms) – Parasites by Vincent Racaniello, PhD is from the course Microbiology: Introduction.

Ascaris lumbricoides belongs to which of the following phyla?

Schistosoma belongs to which of the following class of animals?

Which of the following is true about the parasite burden?