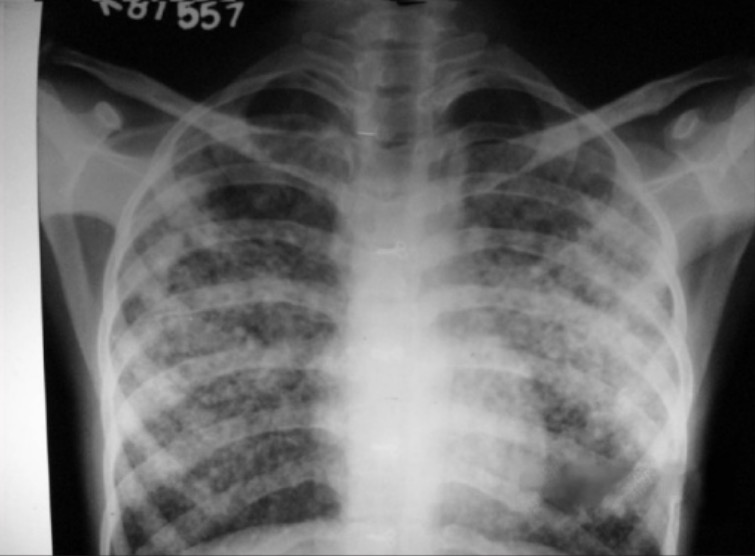 Pulmonary Edema
Pulmonary edema is a condition caused by excess fluid within the lung parenchyma and alveoli as a consequence of a disease process. Based on etiology, pulmonary edema is classified as cardiogenic or noncardiogenic. Patients may present with progressive dyspnea, orthopnea, cough, or respiratory failure. Pulmonary edema is easily recognized on a chest X-ray, and an evaluation should be done to identify the underlying cause. Management involves supporting the patient’s respiratory status with oxygen, diuretics, and treatment of the underlying cause.
read more
Load more
Share
Ask Questions
Take Notes
Download Slides
Report Mistake
Comments
show all Show less
My Notes
show all Show less
Learning Material 2
show all Show less
Report mistake
Transcript
0 of 0

00:01 Now, we’re going to discuss heart failure. 00:03 And heart failure is nice because you could use algorithms both for the diagnosis and management of heart failure, even though it’s a complicated disorder. 00:11 So, let’s start with a clinical question, then we’ll get to those algorithms. 00:16 So, I’ve got a 67-year-old man. 00:18 He has a history of reduced ejection fraction heart failure. 00:21 He currently experiences severe dyspnea walking down the street. 00:25 In fact, he's getting dyspneic even climbing 10 stairs. 00:29 He also has three pillow orthopnea at night. 00:31 He needs three pillows to breathe comfortably. 00:33 But I should also mention that when he’s sitting in his favorite chair, he has no symptoms. 00:39 He is not short of breath and feels comfortable. 00:41 So, given those facts, what is this patient's New York Heart Association (or NYHA) class of heart failure. 00:48 I, II, III or IV? It’s Class III. 00:53 And let’s describe those classes for a second. 00:56 So, class I, he has evidence of heart failure objectively on echocardiogram. 01:02 He’s got an increased brain natriuretic peptide level, but he doesn’t have any symptoms. 01:06 II, he’s got mild symptoms on exertion. 01:09 III, this patient, he has severe limitations on activity. 01:12 He can only go up 10 stairs, but he’s comfortable at rest and class IV symptoms at rest. 01:17 This might come up on your examination. 01:21 So, what do you do with a patient with suspected heart failure? This is a patient who is coming to you and describing the fact that they have dyspnea on exertion, that they have leg swelling, that they can’t breathe at night while lying flat or they wake up gasping during the night, which is paroxysmal nocturnal dyspnea (or PND). 01:42 So, those are elements of the clinical history. 01:45 You’re going to do a physical examination, which I'll describe in a second, and whether the patient might have chronic obstructive pulmonary disease, heart failure, just generally debilitated, many times you'll do an EKG on those patients too because, at the center, you're worried about the heart. 02:05 If any of those elements suggest heart failure – and again, we’ll cover them a little more clearly in a second, think about getting either a brain natriuretic peptide level (or BNP), or a N-terminal proBNP. 02:19 They both measure myocyte damage within the heart. 02:23 And they’re valuable, particularly if they're negative, because when they’re negative, the chance a patient has significant heart failure is very small. 02:30 They’re relatively easy to order. 02:32 They’re now cheap. 02:33 They used to be an expensive test. 02:34 That’s no longer that expensive, particularly just the regular BNP level. 02:39 And it’s a nice test that you can use to help rule out heart failure. 02:44 If there is no – if their history, in the exam, in the ECG, no – there's no abnormalities there to really suggest heart failure, of course, heart failure is going to be unlikely. 02:54 When there is a probability of heart failure based on their history and physical and ECG and, say, you get a BNP that's either borderline or high, send them to an echocardiogram. 03:09 Everybody with heart failure deserves one echocardiogram at least to check for valvular function and assess ejection fraction. 03:18 If the BNP is negative, as I mentioned, the heart failure is unlikely. 03:22 They don't need any further workup. 03:24 And as I mentioned, those natriuretic peptides, the BNP, is rarely done in clinical practice and it probably should be done a little bit more often because it’s a nice way to rule out heart failure, particularly for those patients who don't meet all of the classic signs and symptoms. 03:38 Maybe they are just feeling a little more fatigued and down or maybe they’re getting a little tired with exercise. 03:43 It's a helpful test. 03:45 All right. 03:46 And if echocardiogram is normal, heart failure remains unlikely. 03:53 Once you determine the patient has heart failure, let’s move on to treatment. 03:58 So – but, first, let’s just kind of revisit that history, what are the important elements in the clinical history in patients with heart failure? So, of course, a history of prior heart disease, including hypertension, including any exposure to cardiotoxic drugs or history of significant radiation exposure, say if they were treated for lung cancer or breast cancer. 04:20 Maybe they are using diuretics. 04:22 They went to an urgent care. 04:23 Hey, I’ve got the swelling in my legs. 04:24 It keeps bothering me. 04:25 They get a dose of furosemide. 04:27 They still have that bottle. 04:28 It's a sign. 04:30 And then orthopnea or paroxysmal nocturnal dyspnea. 04:34 Orthopnea is requiring elevation of the head at night in order to breathe. 04:38 PND is waking up gasping for air at night. 04:41 So, those are definitely signs specific for heart failure. 04:45 So, the physical examination also critical for patients with heart failure. 04:49 On pulmonary examination, the classic finding is rales or crackles. 04:54 Those crackles are usually concentrated in the lower lung fields, then resolve somewhat as you get higher. 04:59 Look for edema in the lower extremities. 05:01 It says ankle, but the edema can go past the knee in severe cases. 05:05 You might hear a heart murmur, particularly the S3 extra heart sounds associated with heart failure. 05:12 You can see jugular venous dilation when the patient is laying back semi-recumbent and you can actually measure that. 05:18 It's a way you can measure volume overload among patients with heart failure. 05:22 And then a lateral displacement of the heart too or a broadened apical beat, signs of cardiomegaly associated with heart failure, and that’s usually after it’s fairly advanced unfortunately.

The lecture Heart Failure: Diagnosis by Charles Vega, MD is from the course Chronic Care.

Which heart failure class has symptoms with less than ordinary physical activity but no symptoms at rest?

Which heart failure class has symptoms at rest?

Which of the following physical exam findings is LEAST consistent with a diagnosis of heart failure?

Which of the following regarding brain natriuretic peptide levels and heart failure (HF) is most accurate?