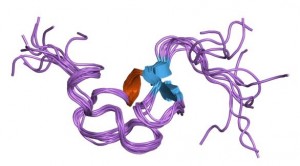 00:01 Now we see a similar thing happening in glycogen metabolism and in another presentation I have talked about glycogen metabolism but let me go through it briefly here. 00:10 We are gonna see in these various hormone pathways similarities; because, many of the same cascade systems are actually used to control them. 00:19 In this pathway, let's start again with epinephrine being released. 00:23 This will be conditions of low glucose in the body and the liver cells are being stimulated to produce glucose. 00:31 Either epinephrine or glucagon can cause this to happen. 00:33 Well, of course, the G protein gets activated, as seen before. 00:37 The G protein activation causes production of cyclic AMP by the adenylate cyclase. 00:44 The activation of protein kinase A happens; because, the cyclic AMP is being produced. 00:49 And then protein kinase A starts phosphorylating proteins. 00:54 There are two sets of proteins that get phosphorylated. 00:57 First, there is a protein called phosphorylase kinase which catalyzes the addition of phosphate to another enzyme that I will talk about in a second. 01:07 The other protein that gets phosphorylated by protein kinase A is the enzyme that makes glycogen. 01:15 Now the phosphorylation of this enzyme called glycogen synthase B, converts the B into the A form and the A form of the enzyme is inactive. 01:26 So what happened is protein kinase, as part of this cascade system, has turned off the synthesis of glycogen. 01:34 Well since glucose is used to make glycogen that make sense. 01:37 This body doesn't have enough glucose so there is no reason to be storing it. 01:41 In fact what the body is trying to do is break it down. 01:45 Now we come back to our phosphorylated protein known as phosphorylase kinase. 01:50 What it does, is catalyze the phosphorylation of the enzyme that breaks down glycogen. 01:56 That's known as glycogen phosphorylase and it converts glycogen phosphorylase from the B form which doesn't have phosphate to the A form that does have phosphate. 02:07 Now this enzyme with the addition of phosphate becomes active. 02:11 That means that glycogen is broken down and glucose is being released. 02:17 So again we see a sort of a reciprocal regulation here. 02:20 Addition of phosphate is turning off the enzyme involved in synthesizing glycogen and addition of a phosphate to the enzyme that breaks it down, turns it on. 02:30 The breakdown of glycogen by glycogen phosphorylase produces glucose-1-phosphate. 02:35 And glucose-1-phosphate is readily converted to glucose-6-phosphate by phosphoglucomutase. 02:41 Now the advantage of this is that glucose-6-phosphate can be converted to glucose in the liver if the liver is exporting it, or if the glucose-6-phosphate makes it to a cell the cell can take that glucose-6-phosphate and use it directly into pathway of glycolysis. 02:56 In either event the goal of increasing the blood glucose level has been accomplished as a result of the binding of epinephrine to this liver cell. 03:05 So binding of epinephrine or glucagon to the receptor on the liver cell cause the breakdown of glycogen to favor the increase in blood sugar. 03:13 If we have a high blood sugar concentration to begin with then, of course, insulin is gonna be produced by the body to deal with that. 03:21 And here at the cellular level of the liver is how it deals with it. 03:23 Insulin binds to the receptor as before and the phosphoprotein phosphatase that we talked about on the last set was activated by the binding of the insulin to the cell surface receptor. 03:35 Now the G protein that we talked about being inactivated before, is inactivated which means that adenylate cyclase is not making cyclic AMP. 03:42 And so the protein kinase A which relies on cyclic AMP is no longer active as well. 03:49 All of the other reactions in this pathway, now involve removal of phosphates and reversal of what happened in the epinephrine pathway. And so we are going to see phosphoprotein phosphatase, which is the protein that has been activated here by insulin, is going to turn everything in a different direction. 04:08 We see first of all that the phosphorylase kinase which was activated by phosphorylation in the epinephrine pathway is inactivated here. 04:17 We see that the glycogen phosphorylase which was activated by the phosphorylation is inactivated by the removal of phosphate and it's converted back to B form. 04:26 By contrast, the glycogen synthase which was in the A form and was inactivated by phosphorylation is now activated by the removal of the phosphate by phosphoprotein phosphatase. 04:38 The upshot of this now is that glycogen synthesis is activated. 04:43 This turns out to be important, of course; because, there is all this glucose coming in the cells since insulin stimulates the uptake of glucose and now the cell has a way of dealing with that incoming glucose by making it into glycogen. 04:56 Glucose, as I have noted, is a molecule that can act like a poison. 05:00 So dealing with that poison in this way makes a lot of sense for the cell.

The lecture Glycogen Metabolism by Kevin Ahern, PhD is from the course Metabolic Control.

What occurs in hormonal regulation of sugar metabolism?

Which of the following statements is not true regarding the glycogen metabolism?