General Structure of the Kidney 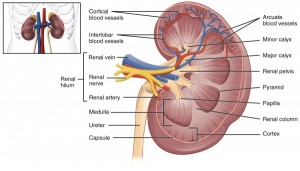 Anatomy and Functions of the Kidneys and Kidney Stones
The kidney (Latin: Ren, Greek: Nephrós) is the urinary system’s main organ. In order to understand the microscopic structure of this organ, it is useful to comprehend well its function. And for this, one has to learn about the different cell types and their structure. The nephron is the kidney’s functional unit and shall be particularly discussed here. After studying this article, you will be able to explain its components. These are the renal corpuscles, renal tubules and the collecting duct system. You will now read a short overview of the functions of the human kidney.
read more
Load more
Share
Ask Questions
Take Notes
Download Slides
Report Mistake
Comments
show all Show less
My Notes
show all Show less
Learning Material 2
show all Show less
Report mistake
Transcript
0 of 0

The lecture General Structure of the Kidney by Geoffrey Meyer, PhD is from the course Urinary Histology.

Which sequence CORRECTLY describes the arterial blood supply to the glomerulus?

Which ONE of the following is not CORRECT about a medullary ray?

Which ONE of the following is INCORRECT information about a medullary ray?

What is the CORRECT anatomical relation of the juxtamedullary nephrons to the cortical nephrons?

Author of lecture General Structure of the Kidney