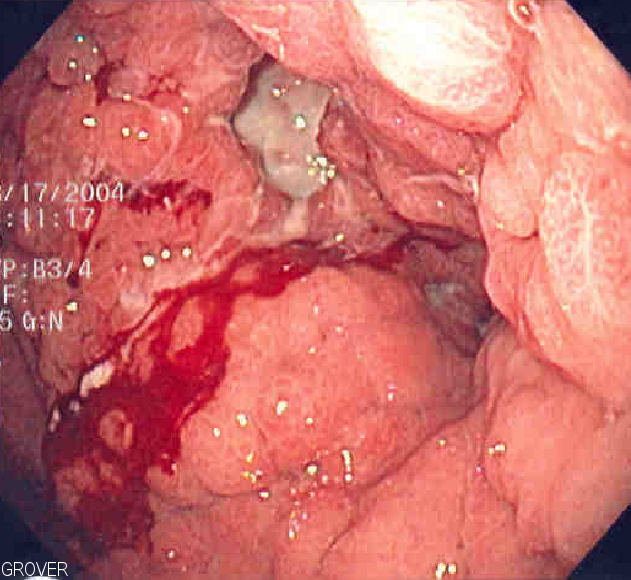 Gastric Cancer
Gastric cancer is the 3rd-most common cause of cancer-related deaths worldwide. The majority of cases are from adenocarcinoma. The modifiable risk factors include Helicobacter pylori infection, smoking, and nitrate-rich diets. Hereditary syndromes, pernicious anemia, and prior partial gastrectomy are among the endogenous risk factors. When symptoms such as epigastric fullness, vomiting, and weight loss occur, it is likely that the cancer is in the advanced stage. Diagnosis is confirmed with esophagogastroduodenoscopy and biopsy. Imaging studies and laparoscopy aid in determining the cancer stage. Consequently, staging dictates the management approach. Management consists of gastrectomy and chemoradiotherapy. Most cases are diagnosed in late stages, indicating a generally poor prognosis.
read more
Load more
Share
Ask Questions
Take Notes
Download Slides
Report Mistake
Comments
show all Show less
My Notes
show all Show less
Learning Material 2
show all Show less
Report mistake
Transcript
0 of 0

00:01 Now let's move on to our next case. 00:03 We have a 58-year-old man seen in clinic for four months of dyspepsia, nausea, early satiety, and low energy. 00:11 He also endorses an eight-kilogram unintentional weight loss during this time. 00:16 He has not had any difficulty swallowing, dark or bloody stools, or vomiting. 00:21 Vitals are normal and his abdominal exam is normal. 00:24 He does have a firm liver edge that is palpated four centimeters below the right costal margin. 00:30 A CT of his chest and abdomen was done one month ago when he presented to the ED with similar symptoms and it shows thickening of the gastric wall and an enlarged liver with several heterogenous densities in the liver. 00:45 So what is the best next test in diagnosis? Let's go through key things in this case. 00:51 He has some vague symptoms with unintentional weight loss which should always prompt you to consider malignancy or cancer. 00:59 He does have an enlarged liver on exam which is concerning. 01:03 And his CT imaging is even more concerning for potentially some type of GI malignancy with possible metastases to the liver. 01:12 So before we answer that question, let's talk a bit about gastric cancer or adenocarcinoma. 01:19 It's the fourth most common cancer worldwide. 01:23 90% of the cancers are due to adenocarcinoma but there are other types such as lymphoma or carcinoid that we will not cover here. 01:32 So like we encountered in our question, so symptoms can be very nonspecific. 01:39 Patients will come in with anorexia or just not feeling hungry, weight loss, abdominal discomfort, early satiety, they might have GI bleeding as the first presentation of their symptoms, and they may have nausea and vomiting. 01:54 The diagnosis has to be made with upper endoscopy. 01:58 There are many risk factors for developing gastric cancer listed here. 02:05 I'm not gonna go through all of them. 02:06 But just know that there are many environmental acquired risk factors that you may have that are both dietary, related to infection, and bad habits such as smoking. 02:16 On the other hand, there are also inherited risk factors. 02:20 So most of these include hereditary cancer syndromes like Lynch syndrome, FAP or Li-Fraumeni. 02:28 So the treatment of gastric cancer, like with all cancers, depends on the stage. 02:33 So here on the right you can see the depiction of the different stages of gastric cancer. 02:37 All you should know is that as it progresses through stages one, two, three, the cancer eventually erodes through the mucosa, the submucosa, and then into the muscle. 02:48 Once it has reached the outer layer or the serosa of the stomach and gone elsewhere in the body, this is always considered stage four. 02:56 So when it is a limited cancer, stages one, two, three, treatment consists of surgical resection and you may also add on neoadjuvant chemotherapy. 03:06 Once it has gone to stage four, unfortunately the only treatment is palliative with cisplatin-based chemotherapy. 03:15 And in some cases if they have HER2 tumor expression, you may give a medication called trastuzumab to target that specific tumor. 03:24 Because it's such a difficult diagnosis to make as patients often come in with very vague symptoms, the prognosis is quite poor. 03:33 They're often diagnosed at a late stage and the only way to cure them is with surgery. 03:39 However even with surgery, recurrence rates continue to be high. 03:44 So now we return to our case. 03:47 We have a 58-year-old man who's had some very typical vague symptoms with unintentional weight loss and he has both physical exam and imaging findings that are concerning for a type of cancer with metastases to the liver. 04:02 So the best next test in diagnosis should be an upper endoscopy to identify the primary lesion of his cancer. 04:09 And if it's gastric cancer then you have confirmed your diagnosis. 04:13 Thank you very much for your attention today.

The lecture Gastric Cancer with Case by Kelley Chuang, MD is from the course Disorders of the Esophagus and the Stomach.

Which of the following is used in the management of gastric adenocarcinoma, stage IV?

Which of the following is an environmental risk factor for gastric adenocarcinoma?