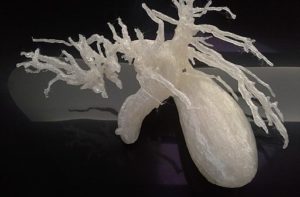 Gall Bladder and Bile Ducts – Structure and Function
The gall bladder (Latin: vesica fellea or vesica basilaris) is the storage organ for the bile and has a storage capacity of 40 – 50 ml. On its way from the liver to the duodenum, the bile runs through a duct system which is referred to as the bile ducts. The function of the gall bladder and the bile ducts is an elementary prerequisite for the complex process of digestion and can be impaired by typical diseases which a physician should know and understand. In order to understand the process of digestion, the spleen and the pancreas are also important.
read more
Load more
Share
Ask Questions
Take Notes
Download Slides
Report Mistake
Comments
show all Show less
My Notes
show all Show less
Learning Material 2
show all Show less
Report mistake
Transcript
0 of 0

00:01 Now let me describe the histology of the gall bladder to you. Here are a series of three sections taken through the gall bladder at various magnifications. The one on the left is a very low magnification picture taken through the gall bladder. And you can see above it, the liver because the gall bladder lies very closely next to the liver. In the middle section, you see an image of the wall of the bladder. And on the right-hand side, you see a high magnification of the epithelium, the mucosa of the gall bladder. And there's really just a couple of points to point out here. First of all, you can see the mucosal fold labelled in the center image. The fold, of course, is going to disappear as the gall bladder fills with bile. Notice that there is no submucosa. It's just lamina propria, and there's no muscularis mucosa as you see typically in some walls of the gut. 01:12 There is only just the muscularis externa which is going to contract under the stimulus that it receives to push or eliminate that bile into the duodenum. 01:23 The function of the gall bladder is to not only store bile but to concentrate it. 01:31 It might receive a liter of bile a day from the liver. And that bile, remember is produced from all those hepatocytes and secreted into those bile canaliculi. 01:46 Those bile canaliculi, if you line them up altogether, would extend about two to two and a half kilometers, an enormous distance for this hepatocyte to secrete bile into. Well, that bile then, as I've mentioned, travels through the hepatic ducts and the duct system I described earlier, to the gall bladder. And the gall bladder then stores only about 50 mils. So it highly concentrates that litre of bile per day it receives, and it does that by absorbing water. And if you look at the right-hand side image, you can see little spaces between the epithelial cells, the intercellular space. 02:36 That's indicative of very active water transport. There are sodium pumps in these cells that pump sodium ions into that intercellular space. And those lateral borders of those cells are very folded to allow it to expand when the water passes into it. When the sodium goes into that space, chloride ions follow to try and maintain the electrical gradient neutral, but then it creates an osmotic gradient. And so, water flows into the space. If you ever want to move water in the body, move sodium first and water will follow. So you see in those spaces water accumulation, which finally, goes into the space underneath the cells into the lamina propria into capillaries there. It can't go back into the lumen because of the tight occluding junctions at the surface, and I explained the role of those junctions when I gave a lecture on epithelia. So, that's how the gall bladder concentrates the bile. And those intercellular spaces are evidence of that.

The lecture Gallbladder by Geoffrey Meyer, PhD is from the course Gastrointestinal Histology.

Which of the following layers of the gut wall is absent in the gall bladder?

Which of the following is TRUE about the gallbladder?