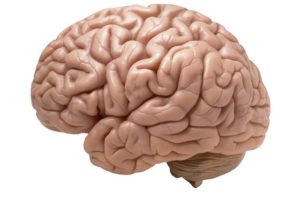 00:00 Now, let’s take a look at each of these lobes to appreciate more fully the functions that are associated with them as well as the various subdivisions of each lobe. We can also explore as we move through each lobe, what might happen if there’s a lesion within a specific area of a lobe. 00:27 So here, we’re looking at the primary motor cortex. This is shown right in through here in green. The primary motor cortex is associated with the gyrus that’s immediately anterior to the central sulcus. This is the precentral gyrus. We have the famous homunculus associated with the primary motor cortex. The little man, the homunculus demonstrates the density of upper motor neurons that are going to control the musculature of various regions of the body. So, we see a large area here mapped out for the face because a large number of motor neurons, upper motor neurons are going to control the muscles of the face. 01:23 We also have a large area here mapped out for the hand. Again, a large number of motor neurons are going to control the fine, delicate movements that are associated with this part of our anatomy. This homunculus does extend over the top of the cerebral cortex, over the top of that precentral gyrus and continues on the medial aspect. We’ll see that continuation on the next slide. An important aspect about motor control is that of the motor neurons on one side. Here, we’re looking at the left precentral gyrus. They’re going to control the contralateral muscles, those that lie then on the right in this case. What might happen if there’s a lesion within the precentral gyrus? That will cause contralateral paralysis or paresis. Because you are damaging and destroying the upper motor neurons, you may very well see Babinski response depending on the location of the lesion. So, if the lesion is in this area specifically, you would have contralateral paralysis or paresis of the hand for example. If we continue our view here on the medial aspect of the precentral gyrus and again, that’s shown in green, we can see the buttocks lie here on the superior aspect of the precentral gyrus medially. Then you can start to see the lower extremities continue distally, so that the feet are approaching the cingulate gyrus that’s along here. If the stroke is in this area and you have a lesion in this area and you’re unable to have upper motor neuron control of the distal extremity of the lower extremity then that’s when you can see a Babinski response as well as a contralateral paralysis or paresis of that associated anatomy. Another area of interest that I want you to understand is that of the premotor cortex. The premotor cortex lies anterior to the primary motor cortex. We see it’s a small area here. But it’s essential in the programming of motor events. So, this programming will then cause these neurons that reside in this territory to activate prior to the primary motor neurons that are within the precentral gyrus. A lesion of the premotor cortex is associated with apraxia. Apraxia is a motor speech disorder. This can be associated with other lesions in the frontal lobe. Our next area of the frontal lobe is that of the supplemental motor cortex. We see it identified again anterior to the precentral gyrus. It’s involved in the planning of complex motor movements. 04:49 A lesion of this cortical area can cause apraxia as well. Another area within the frontal lobe is the frontal visual field cortex. This area right in through here. It’s even a bit more anterior to the other areas that we were describing, that I was just describing for you. It's involved in the coordination of voluntary movements. A lesion of this small area can result or will result in paralysis of conjugate gaze to the opposite side. This is discussed in another presentation, what conjugate gaze is and how that circuitry works. Another important area within the frontal lobe is this area in blue. This is Broca’s area shown right in through here. 05:53 This is the area of the frontal lobe that’s involved in word production or motor speech. 06:00 A lesion here results in expressive aphasia or nonfluent aphasia. Lastly, within the frontal lobe, I want you to understand the prefrontal cortex. We see that area here. This is the area of the cerebrum that takes some degree of maturation to become fully functional. 06:27 This is involved in executive functioning. One of the functions under this heading would be that of problem solving. It’s also involved in making day to day multiple judgments. 06:48 Many times we make very, very good judgments or decisions. These judgments as we mature tend to make us make the right choice or the right decision. Another aspect of the executive functioning is that this is the area that allows us to plan. It also drives behavior and emotions. 07:19 It’s not the only area but behavior and emotions are modulated by the prefrontal cortex. 07:29 Then an area of the prefrontal cortex is involved in olfaction, the olfactory pathway.

The lecture Frontal Lobe by Craig Canby, PhD is from the course Cerebral Cortex.

Which of the following is associated with the primary motor cortex?

Where does programming of motor events take place?

Which of the following symptoms would occur if a person had a lesion in the frontal visual field cortex?

Which of the following symptoms would occur if a person had a lesion in Broca's area?