Examination of the Scalp 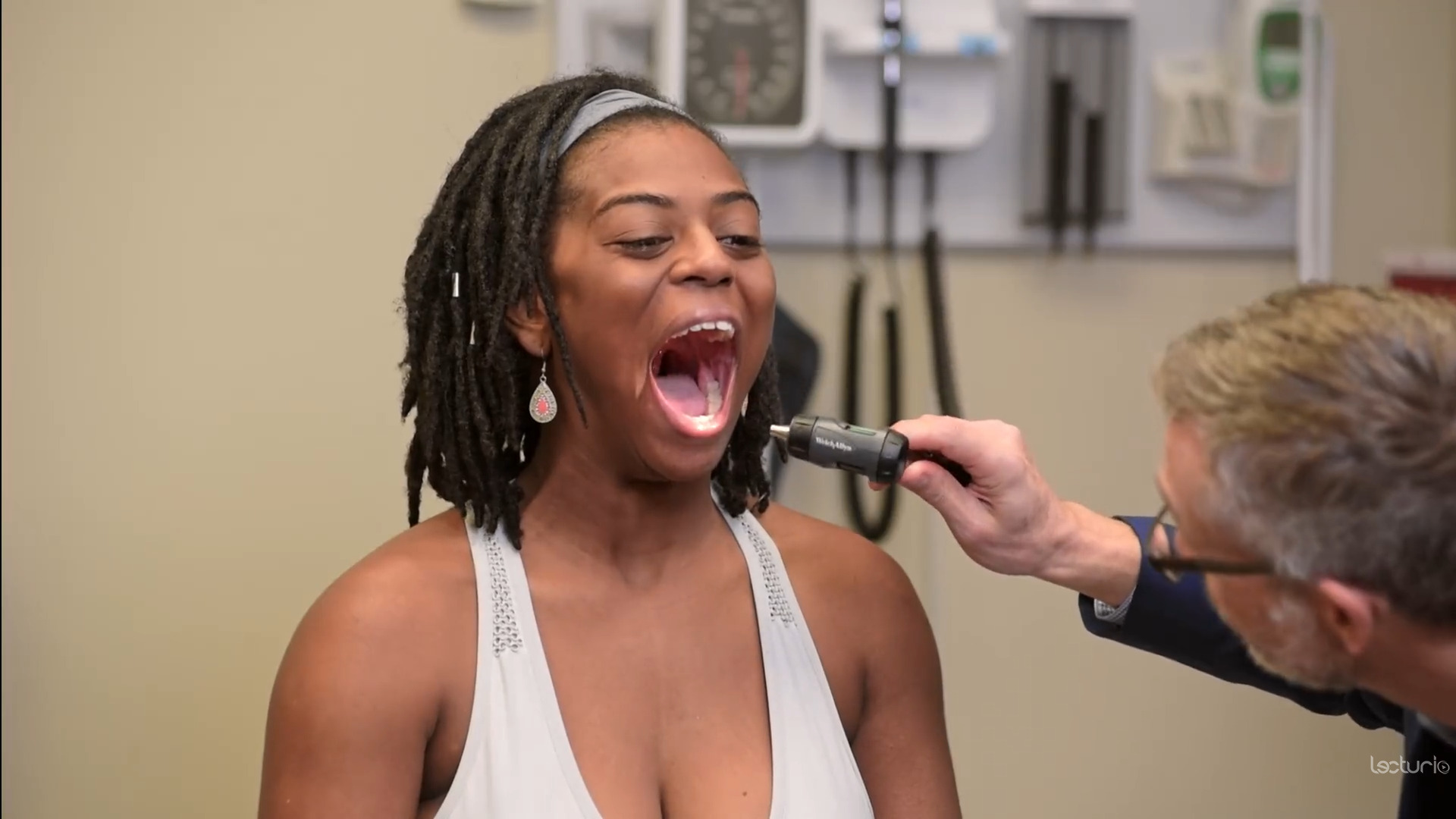 Dermatologic Examination
Examination of the skin is a fundamental part of the standard physical exam. This exam consists of a thorough inspection of the skin of the entire body. The assessment focuses on identifying abnormal signs on the skin, such as the scalp, orifices, nails, and mucosal surfaces. Dermatologic findings can represent localized processes or may be a sign of systemic disease.
read more 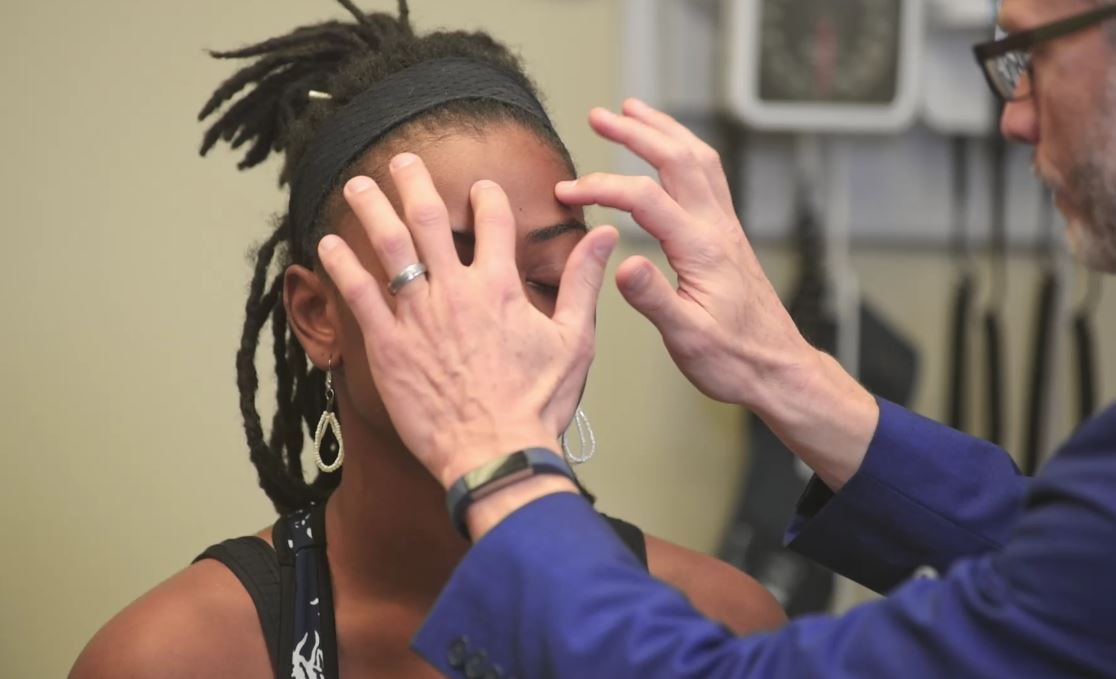 00:00 Now we're going to move on to do the hair exam or scalp exam, and this is an important part of the dermatologic exam that you don't want to miss. And I'm just going to focus on 3 specific conditions, and we'll start with alopecia androgenetica. This is simply the hair loss that accompanies aging in both men and women. There's a particular pattern in men where typically men lose hair on the vertices of the scalp in a very predictable way over time. 00:29 There's no evidence of inflammation, you shouldn't see erythema or scale or any other concerns that should be symmetric as well. That will be typical of "male pattern baldness". 00:39 Women also lose hair progressively over time as they get older. It's a different pattern, however, it tends to be more diffusely across the entire top of the scalp, less so in the ears but it's more diffusely scattered than a specific pattern with a receding hairline. So that's alopecia androgenetica and it's not something we get to worked up about. The next condition is alopecia areata. This is an autoimmune mediated disease and instead of it being symmetric and in specific predictable locations, alopecia areata is more focal and it can really be anywhere on the entirety of the scalp. So the patient may report that "I'm just losing hair in one specific patch over here" and when you move the hair away you'll take a look and you'll see a complete bald spot in one little discrete area. There is a specific test that we can do to really discern whether or not alopecia areata is happening. I will just add that there should not be any signs of inflammation, this is a disease happening at the microscopic level so you shouldn't see scarring, erythema, redness, tenderness. Any of those things would not be consistent with this autoimmune disease. However, if you were to look in that patch, you may see what's called exclamation point sign, which is these broken hair follicles that have a somewhat tapered ending on them, so you could see that on the scalp. And that would be one of the most prominent features. The next condition I wanted to talk about is telogen effluvium. Telogen effluvium is also relatively common and it is similar to female pattern alopecia androgenetica, it's diffuse nonspecific hair loss but it's occurring under specific typically transient situations. So pregnancy. Oftentimes a few months after pregnancy a patient may report that I'm losing all my hair. Or in the setting of having bariatric surgery or some other major surgery this may happen. Occasionally, you can see with malnutrition or hypoalbuminemia, other sort of systemic stressors to the body. And one great way to confirm that the patient really is losing hair because sometimes people say all their hair is falling out and you could see a full head of hair and something called the hair pull test. And what you'll simply do is grab an area of hair, you want to make sure you've got maybe 60 or so not that you're going to count specifically, but just imagine about 60 or so hairs and then simply pull back between your finger and your thumb and see how many hairs come out with that simple test. If you get more than 3-5 hairs; in this case I got one, two; two total hairs. If you get more than 3, 4, or 5 or more then that would be abnormal and would suggest that the hair follicles are releasing their hair a lot easier than they should and that would at least support the patient's report that they are in fact losing all of their hair. At that point, you'd have to figure out exactly what the cause is in this circumstance. At this juncture, I'll just make one final point as we wrap up the skin exam. It's really important to acknowledge that not all skin tones and hair types are the same when you're assessing the skin and assessing the hair. And in fact people who have darker skin are more prone to certain types of skin diseases. Those who are more fair-skinned are in particular more prone to sun cancers. And folks who have different types of hair are also more likely to develop certain conditions like traction alopecia in African Americans or acne keloidalis nuchae on the back of the head also in African Americans. Keloids maybe more common or definitely more common in folks who are darker skinned as well. So, it's important to make sure that you're educated about the different kinds of conditions that can occur in different skin types.

Which dermatologic condition is matched correctly with its description?

Which condition is also known as male-pattern baldness?

Author of lecture Examination of the Scalp