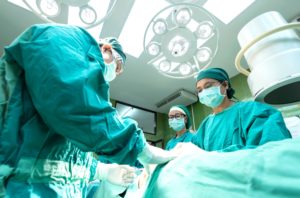 Portal Hypertension and Esophageal Varices — Symptoms and Causes
The development of varices in the esophagus and the gastrointestinal tract is only one of the 3 complications caused by increased pressure within the portal system, the others being ascites and hepatic encephalopathy. All of these conditions are essentially brought about by diseases that impair the flow of blood through the liver such as in liver cirrhosis. The presence of collateral blood vessels in the portosystemic circulation allows for a normal blood flow into and out of the liver. However, these collateral do not hold blood well in times of increased portal pressure, making them vulnerable to massive dilatation and rupture.
read more
Load more
Share
Ask Questions
Take Notes
Download Slides
Report Mistake
Comments
show all Show less
My Notes
show all Show less
Learning Material 2
show all Show less
Report mistake
Transcript
0 of 0

00:01 Here we have varices. 00:03 Esophageal varices to you, first, first place that you’re going to turn to for pathology in the origin of esophageal varices would be the liver, okay? Now, before we get there, what’s going on and what you’re going to find in your esophagus? Varices means dilation of the veins, esophageal veins. 00:25 They’re known as the cardiac veins and… make sure that you know from anatomy your portocaval anastomosis. 00:31 Three different and I like the pneumonic, it’s cute: Head-Butt-Caput. 00:35 Head - esophageal varices; region, obviously not the head. 00:41 Head region, esophageal varices. 00:44 Butt - hemorrhoids. 00:45 Caput - caput medusa. 00:48 These are the three major areas of porto - portal vein, caval - inferior vena cava, anastomosis. 00:55 These will be the areas in which, if your patient, in the liver, results in portal hypertension. 01:04 Close your eyes, think about the portal vein. 01:07 The portal vein - the splenic vein and the superior mesenteric vein will come together. 01:16 These two veins form the portal vein draining into the liver. 01:20 At any point in time, if there is obstruction of the portal vein draining into the liver such as cirrhosis, such as Budd-Chiari with hepatic vein thrombosis backing up or portal vein thrombosis. 01:35 You call this pre-hepatic portal hypertension, portal hypertension - hepatic, or post-hepatic portal hypertension. 01:43 Are you with me? From henceforth, portal hypertension, there are many differentials. 01:50 Don’t always think that it’s always cirrhosis. 01:53 Any time the journey of your portal vein to the liver, if it’s been impeded or result in portal hypertension, what happens? You increase your hydrostatic pressure in three different places - Head-Butt-Caput. 02:08 Are you with me now? Of all the three places, which one’s the emergency? It ain’t the hemorrhoids. 02:17 Its esophageal varices. 02:19 What happens? If this ruptures, your patient actually may suffocate on his or her blood. 02:26 No joke. 02:27 This is an emergency. 02:29 So all jokes aside, let’s get serious. 02:32 Portal hypertension is your point; most common cause of massive upper GI bleeding, high mortality, 30% within 2 weeks. 02:43 Serious. 02:45 Recurrent hemorrhage noted in 70%, one year. 02:50 Early endoscopy for diagnosis and treatment and beta-blockers, beta-blockers, beta-blockers, reduced the recurrent bleeding by 50%. 02:59 That is pretty impressive. 03:02 We’ll do an upper endoscopy here yet once again. 03:06 This time you’ll notice the following, you’ll notice that here that the esophagus not nice and smooth. 03:12 You got these bulges. 03:16 You could find a little bit of bleeding, that means that this is dangerous isn’t it because with the varices, it’s what’s actually happening here. 03:22 Why do you find the bulges? Because the esophageal veins, secondary to portal hypertension resulting in that increased hydrostatic pressure, is causing engorgement of the veins. 03:34 Hence the hemorrhoids, hence the caput medusa, hence the esophageal varices. 03:40 Here you can actually notice it on upper endoscopy. 03:43 This is an emergency. 03:45 Acute episode, resuscitation and correction of coagulopathy is important. 03:51 Esophageal varices. 03:54 Endotracheal intubation for airway protection. 03:56 No joke. 03:59 Endoscopic band ligation or sclerotherapy. 04:03 IV octreotide to decrease portal pressure. 04:08 Now, that portal pressure which is going to be for the most part, the next set of… the next couple of bullet points here, become important because remember the problem began at the level of the liver or in the region with the portal vein. 04:28 There’s something called the tube placement, known as the Blakemore. 04:32 And then you have TIPSS, which literally you’re going to bypass the liver. 04:38 You’re creating a portocaval type of shunt. 04:42 Okay, so it’s a transhepatic type of portal shunt. 04:46 So you’re going to shunt-- if for example your patient had overdose in acetaminophen and therefore causes damage to your liver. Liver’s dead, you’re worried about portal hypertension, esophageal varices. You bypass the liver by providing TIPSS or implementing TIPSS. 05:03 When you… transhepatic and you create a shunt, you are directly going into the head. 05:10 The major, major, major side effect that you’re worried about with TIPSS is that when you bypass the liver which is heavily, heavily involved with proper metabolism, metabolism of your ammonia that you are directly introducing ammonia into the head resulting in your encephalopathy - major side effect. 05:31 But you really… lack of a better term here, catch 22 situation, because if it is liver damage and you’re going to cirrhosis and such, you’re worried about esophageal varices. 05:45 You have to bypass it but at the same time beware that the patient may then at some point start having this, right; encephalopathy, I’m doing asterixis - resting flapping tremors. 05:57 Good information here. 05:59 Emergency esophageal varices, acute episode, pay attention. 06:04 And at the very end here, when I talk to you about TIPSS, I’ve given you few things about complications. 06:12 Recurrent hemorrhage, beta-blocker, 50%. 06:14 You are, you are exercising prophylaxis. 06:20 Band ligation for those that cannot tolerate the medication, such as maybe perhaps your patient has asthma. 06:26 Why would you want to give beta-blocker? Or be very cautious about administering beta-blockers.

A 40-year-old alcoholic patient presents to the emergency department with massive upper GI bleeding. He had a similar episode in the past. On examination, you notice signs of portal hypertension. His blood pressure falls to 85/45 mm Hg. In addition to ordering an endoscopy and starting fluid resuscitation measures, what would be the NEXT appropriate step in the management?

Which of the following medications/procedures would NOT be a treatment option for a patient with esophageal varices resulting from portal hypertension?

A 32-year-old male comes to urgent care complaining of bloody vomiting. He states that he drank heavily at a party last night. He had similar episodes in the past. Which of the following would be the best prophylaxis for this patient?

Very funny the way that he explains everything, make difficult concept very much easy to understand and with high yield information!!!

Very funny the way that he explains everything, make difficult concept very much easy to understand and with high yield information!!!