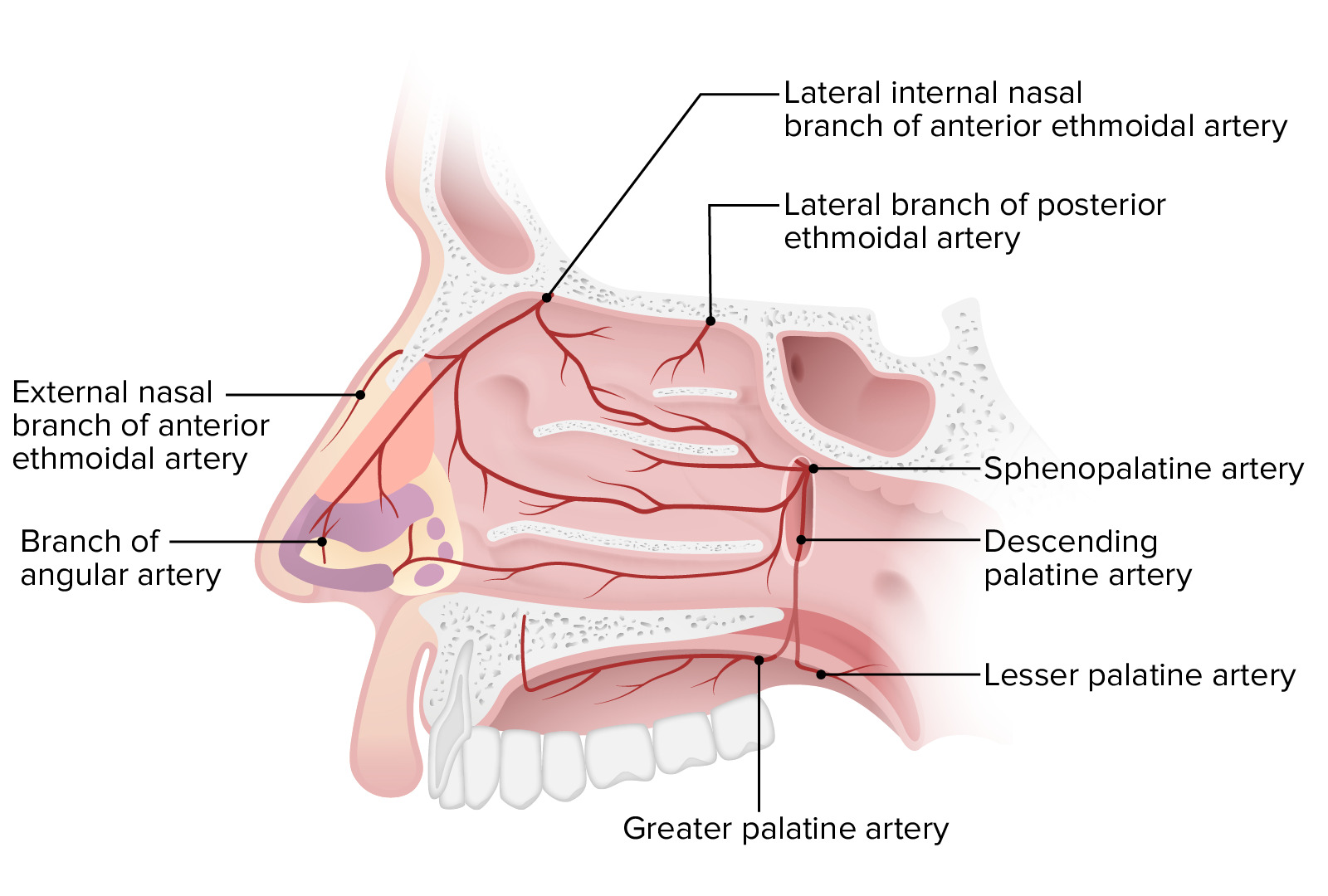 Anatomy of the nose
The nose is the human body's primary organ of smell and functions as part of the upper respiratory system. The nose may be best known for inhaling oxygen and exhaling carbon dioxide, but it also contributes to other important functions, such as tasting. The anatomy of the nose can be divided into the external nose and the nasal cavity. There are 12 cranial bones that contribute to the structure of the nose's walls and nasal conchae.
read more
Load more
Share
Ask Questions
Take Notes
Download Slides
Report Mistake
Comments
show all Show less
My Notes
show all Show less
Learning Material 2
show all Show less
Report mistake
Transcript
0 of 0

00:01 In this lecture, we’ll discuss epistaxis, nasal trauma and sinusitis. 00:05 Everything about noses. 00:07 So epistaxis and nasal trauma first. 00:12 Most nosebleeds in children are from digital manipulations. 00:16 Nosebleeds can be severe and are common and do not mean there’s necessarily a bleeding disorder. 00:22 But very rarely, it can be truly excessive and then it’s a bleeding disorder. 00:27 With that said, we see this all the time. 00:30 About half of children will have a nosebleed between the ages of 6 and 10 and in children under 2 though, that’s when you might think about something like child abuse as a cause. 00:40 So why are your anterior bleeds so common? Well, the anterior bleeds are usually from digital trauma and they arise from the Keisselbach plexus. 00:49 So the Keisselbach plexus is right in that anterior chamber and is very prone to easy bleeding. 00:55 Posterior bleeds are more likely to result in swallowed blood and emesis and those are usually pathologic and far rarer. 01:04 So if we have a child with an anterior bleed, what do we do? The first thing to do is apply pressure. 01:10 And don’t constantly check. 01:11 Just put both fingers over the edge of the nose, usually with a gauze or a Kleenex and squeeze and do not let up for 15 minutes. 01:20 Almost all will stop on their own. 01:22 You can also ice the nasal bridge to constrict some of the plexus blood and you can also if you wish, use an intranasal vasoconstrictor like a puffer that you use for colds with phenylephrine or some equivalent alpha agonist, it will also cause a vasoconstriction in the nose and may prevent some bleeding. 01:42 If it’s very severe because of a deep excoriation, you could use silver nitrate as well. 01:48 If that still hasn’t worked, that’s when we might use something like packing. 01:52 Oftentimes, we’ll use either a nasal tampon, which is a device used for the nose or we can also use a foley or some other inflatable device. 02:00 They market them periodically, that inflate both in the back and front and can encapture that area with blood and prevent further bleeding. 02:09 You should consider a workup for a bleeding only if problems are truly hard to stop and then you would of course, get a CBC to look for thrombocytopenia and a PT/PTT to look for coagulation disorder. 02:22 So we would always pack the nose in the event of a posterior bleed. 02:27 Posterior bleeds are very unusually and usually will present with some anemia because this bleed can go on for quite a while with swallowed blood. 02:36 For that, you definitely want to consult ear, nose and throat doctor for direct imaging or consider an MRI of the head to look for some posterior tumor or some other source of bleed. 02:47 If the bleed is from nasal trauma, the most important thing to do is to inspect the nasal septum. 02:53 In fact, and child who’s incurred direct nasal trauma, say from a baseball to the nose, you should inspect the septum. 03:01 The septum is the space between the nostrils up inside. 03:04 If that is wider than it should be, if you can see the septum up the nose when you’re looking up there, that patient is going to have a cosmetic problem, unless you immediately solve the problem. 03:16 The idea there is that a septal hematoma is a surgical emergency because if left unchecked, it can eventually result in a saddle nose deformity, which is very hard to reconstruct and reconfigure with plastic surgery. 03:30 For nasal fractures, we typically will set them immediately or after healing, they can go see an ear, nose and throat doctor and have them reset.

The lecture Epistaxis and Nasal Trauma by Brian Alverson, MD is from the course Pediatric Emergency Medicine.

Which of the following is a consequence of a missed septal hematoma of the nose?

Which of the following is the most appropriate initial step in the management of a 1st-time anterior nose bleed in a 5-year-old child who is otherwise normal?

Which of the following is true regarding epistaxis?