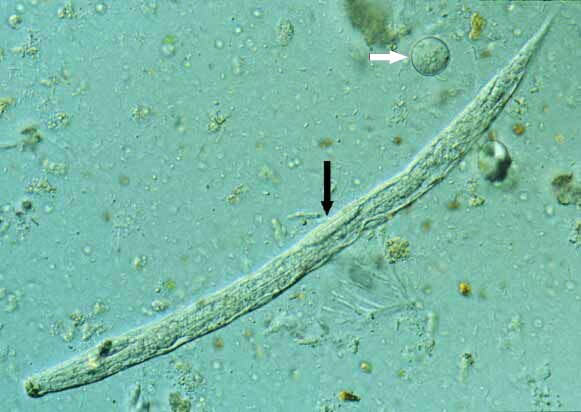 Strongyloidiasis
Strongyloidiasis is a common parasitic disease caused by infection with the roundworm Strongyloides stercoralis. Transmission occurs through skin penetration, most commonly from walking barefoot. Strongyloides has a unique life cycle that can be entirely completed in the human host, migrating from the skin to the pulmonary system and then to the GI system. Symptoms include cutaneous irritation, constipation, diarrhea, dry cough, and wheezing, depending on where the parasite is in its life cycle. Effective eradication of the parasite can be obtained with anthelmintic medications, usually ivermectin.
read more
Load more
Share
Ask Questions
Take Notes
Download Slides
Report Mistake
Comments
show all Show less
My Notes
show all Show less
Learning Material 2
show all Show less
Report mistake
Transcript
0 of 0

The lecture Eosinophilic Lung Disease (ELD) by Carlo Raj, MD is from the course Disorders of the Pulmonary Circulation and the Respiratory Regulation.

Which of the following are the defining criteria to diagnose eosinophilic lung disease?

Which of the following is least likely to cause eosinophilic lung disease?

What is the name of the heart disease that is caused due to eosinophilic lung disease?

Which of the following infections causes eosinophilic lung disease by the direct invasion of lung parenchyma?

Which of the following organisms is least likely to cause transpulmonary passage of larvae?

Which of the following is not true regarding eosinophilic lung disease?

Which of the following is not a clinical characteristic of acute eosinophilic pneumonia?

Which antibody is found in eosinophilic granulomatosis with polyangiitis?

Which of the following is not associated with allergic bronchopulmonary aspergillosis?